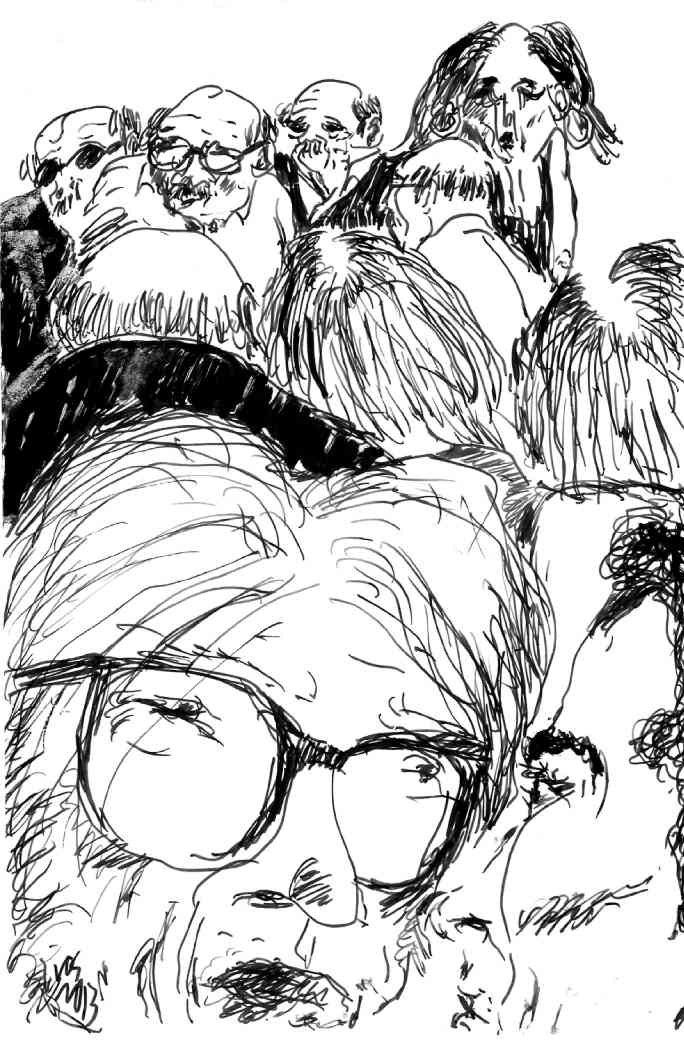 “AREN’T we relieved we’re only in-laws, not genetical relations?”

Anyway, the exclusion had nothing to do with any heirlooms or any other inheritance up for appropriation. It was, rather, a condition set in an invitation to a pot-luck lunch for planning a Roces reunion.

The lunch was at the Makati home of the oldest living member of the clan, uncle Marcos Vidal-Roces, and the reunion, planned for around his 95th birthday, in December, may well be especially for him.

Tito Marcos and his two sisters had been orphaned early. Their father, also named Marcos, had been the youngest brother of, and the closest sibling—next in line, in fact—to my grandfather Rafael.

For obviously practical reasons, the lunch group was limited to one representative per family.

Even so, with yet some missing representation, there were already 30 of us.

Typical of our get-togethers, a formal table was set up in the main dining room for our elders, served according to seniority. Perhaps that would be about the only advantage of sitting there, and one better be conversant in Spanish, or be silent the whole meal.

We relatively young’uns occupied the tables in the verandas where rules, except for the usual table manners (no elbows on the table), were more relaxed. We served ourselves, and the conversation liberally multilingual, although not necessarily more irreverent than at the main table, where predecessor occupants could have outdone us, even if we had been left unrestrained, with the chistes and chismis of their era.

As most of our parents have passed on, more and more seats at the table have had to be filled by some of the older orphaned nephews and nieces; my own turn has not come.

Some of us may actually have qualified early on, given the wide age differences between the first Roceses, not to mention the prodigiousness of some of them.

My own Lolo Rafael, the second youngest and last survivor of his brood, was about the same age of the oldest son, Ramon, of his oldest brother, Alejandro (Moy).

All too soon, at any rate, older cousins have had to step up to their place at the table for the “oldies”—a category necessarily broadened, though not always wholeheartedly accepted, in our clan’s case.

The standards as to who steps up are unclear—looks and other marks of advanced seniority, regardless of actual age, are a consideration—but the issue gets decided somehow.

At this lunch, Tito Marcos sat at the head of the table. To his right sat his first cousin, my dad’s oldest living sibling, Tito Peping, 92. All the others were from the next generation: Morita, Ramon’s daughter; Beneting Legarda, with his wife, Lita, the only in-law con permiso; Menet Legarda, Sylvia Roces, Tanya Verzosa, and the much younger Peachy.

Although in his early 80s and belonging to the oldest living generation, Marquitos preferred to join us at the veranda.

Again, typical of our parties, there was such an overkill in food and desserts, I can’t imagine what else could be added for the actual reunion. The potluck made for a generous buffet: fabada, roast turkey stuffed and complete with trimmings, paella, fresh lumpiang ubod, roast pork, vegetable salad, Russian salad, fruit salad, lemon pie, sans rival, chocolate bars.

Everything looked good, and tasted even better, worthy indeed of a reunion feast itself.

Much was bound to be left over so that who got to take home what needed to be settled and organized even before the day’s business could begin.

The meeting was called to order. The mic was passed around to give each one a chance to give suggestions, comments or advice. That was as close to a planning session as we could manage.

The mic was put to better use by Tito Marcos, ever the romantic, who enjoys old tunes and still remembers the lyrics of most of his favorites. He began to sing along with a singer who came engaged for the occasion with an accompanist pianist.

Soon he was joined by others, but definitely not by anyone from our side, where singing is not a forte, although, again, for all the boldness of the joiners, it doesn’t seem their forte, either.

At singing parties like these, we miss younger cousin Josie, daughter of Marquitos. An honest-to-goodness soprano, she could by herself have more than ably represented the family. Alas, she was not enlistable, having migrated to Canada.

Josie must have not only got it, but got all of it, leaving nothing to the rest of us, from our grandmother Enchay, a legitimate contralto (the lowest range for a female voice)—she passed up a scholarship to Vienna to marry Rafael.

Lolo Rafael himself had a regular male pitch, as I remember from sessions during which he taught me Spanish children’s songs, like “Tengo una muñeca,” as well as the anthem of his family’s native Asturias.

That’s why I can quite understand how all his nine boys came to possess high-pitched Neil Sedaka voices, which in us daughters have come out even higher-pitched. Pitch, though, would seem less the problem than being in tune.

Anyway, we all had fun and ate very well. In fact, so far as I’m concerned, right there was a reunion as good as any. We were just the right number, and of the right ages to have enough common recollections, to enjoy it. It was not, for one thing, overwhelming for the elders.

Tito Marcos stayed around longer than usual before his siesta, singing and chatting with everybody. In fact, his granddaughter Genevieve told us, in tears, that before going into his room to retire, he had told her his wish: that the day would never end.