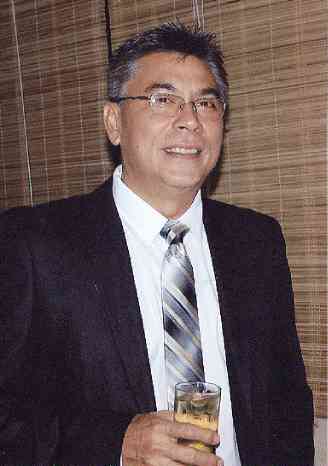 Dia De La Hispanidad was celebrated with the usual fanfare by Casino Español de Cebu with a well-attended formal ball. Upon arrival, guests were led to Salon Granada for cocktails and Spanish specialties such as Queso Manchego, Jamon Serrano, Tortilla de Patatas, and special chorizo made by Ipar Miranda.

Doors to Salon de España, the grand ballroom, were opened shortly before 8 p.m. An elegant crowd started filling up more than 30  tables around the dance floor.

Club general manager May Ocaba and events manager Ritchel Bojos saw to the efficiency of an army of waiters ready to fill up any glass about to go empty.

Paco Jarque gave the welcome remarks and introduced president Veloso who wished one and all, “Muy buenas noches; bienvenidos a todos.” He also thanked Honey Jarque Loop for the décor and all her efforts to make the “Dia” a great success.

A buffet dinner was served at Salon Madrid with carving stations for roast lamb and beef, large paellas, pasta any which way, varied salads, the club’s specialties, and heaps of tempting desserts.

The “On the Cover” band played mood music and, eventually, dance tunes, though it took a while for the ball to take off. Once it did, it went on way past midnight. One of the dancing-est couples that night was formed by Spain’s honorary consul Anton Perdices and his wife Maripaz.

A large crowd of car enthusiasts and fashionistas gathered at the Atrium of SM City Cebu’s Northwing for the latest edition of “Gear & Glam,” a display of actually running vintage cars, coupled with a dazzling fashion show by the Fashion Council of Cebu.

Theme was “Avenues of the World,” which was depicted on a giant screen, featuring Tokyo, Paris, Milan, London, Moscow and New York. As in other years the cars had come from the collections of members of PACE.

That stands for Performance and Classic Car Enthusiasts. In the list of this year’s participants, and some of them did drive their own cars, were Harold Ong Badilles, Chris Aldeguer, Glenn Doco, Bobby Aboitiz, Kenneth Cobonpue, Grand Benedicto, Jay Aldeguer, Mike Jo, Darren Deen and Louie Uy Masuy.

Seated on front row was SM Prime Holdings VP Marissa Fernan, Councilor Margot Osmeña and fashion plate Amparito Llamas Lhuillier. They listened to the news that next “Gear & Glam” will be held when the SM Seaside Complex is complete at the South Road Properties. The cars will actually come in a motorcade.

After the show, there was a party served by Café Laguna in situ. Lita Urbina personally supervised the service. A-List’s Cybill Gayatin, Kaye Sala and Ian Balo were congratulated for the show.

They were quick to deflect the praise to Junjet Primor, who was there, as he had choreographed the fashion show with his usual aplomb.

Another event organized by A-List, with a large attendance as well, was the relaunch of the Meridian Store in the Ayala Center ground level. If Aladdin’s cave had been exclusively filled with watches, this is it, a treasure trove of time pieces.

Among the tables on display are Tommy Hilfiger, Hugo Boss, the Boss Orange, Cross, Juicy Couture, Police and Esprit. “Nixon is a bestseller,” said Cybill and Kaye, amazed at the impressive number of watch collectors in Cebu.

Meridian is the term used to denote “the highest point attained.” We are also told it is an imaginary great circle in the earth’s surface passing through the north and south poles, and any given place between. Get it?

What next for A-List? They’re bringing Juvenal Sansó for an art exhibit any day now.