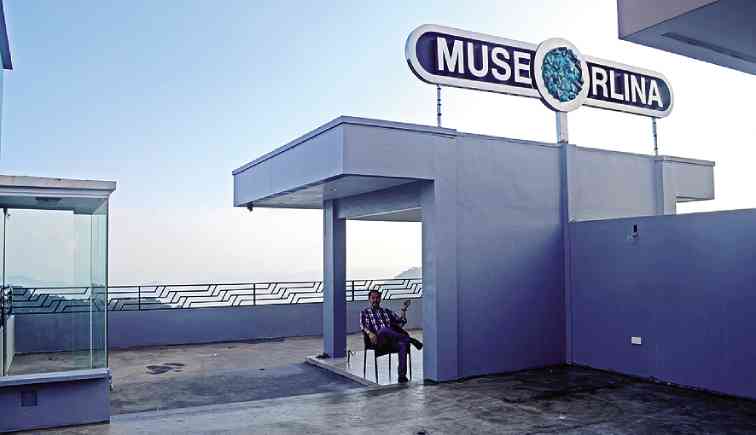 THE ARTIST on the roof deck luxuriates in the nippy weather and breathtaking view. At left, sculptural neckpieces of glass PHOTOS BY ANDREW TADALAN

There are only two museums owned by artists in the country: BenCab Museum in Baguio and Museo Orlina in Tagaytay.

The latter will have a soft opening Nov. 30. Tourism Secretary Ramon Jimenez Jr. has been invited as guest of honor.

Owned by eminent sculptor Ramon Orlina, the museum is in a four-unit, five-level townhouse on Tolentino Street in Hollywood Subdivision, overlooking Taal Lake and Volcano. Speeding motorists may miss the structure as it stands in a sloping area, but its signage can be seen from the highway; and it’s just beside Econo Hotel, a landmark in the place.

“I had been thinking of building this museum five years ago, to promote art and tourism,” says Orlina. “People come here [Tagaytay] for recreation—horseback riding, organic food, the view [of the lake and volcano]—nothing on art.”

He thought of building the museum in his hometown Taal, but he had second thoughts. That place is overrun by heritage structures, and the ancestral house he could have renovated to showcase his sculptures would be patently incongruous for such modernist pieces.

When a friend offered to sell this Tagaytay townhouse with a fabulous vista, he grabbed the opportunity. He purchased the property in May last year and started renovation four months later.

He had it painted white and gray, and installed with an elevator and half-solar, half-electric air-conditioning units. The building is nearly wrapped in plate glass; and when the blinds are drawn, one can see the display in the galleries from outside, so that the glitter of crystal and the flash of brass amaze the passer-by.

By the main entrance of the building is an ornate capital of fiberglass Orlina had duplicated from the original that had fallen from the façade of the basilica of Taal town, every crevice and crackle of the ruined hardwood captured by the rubber mold. He says he’d install it later in the garden, where it can serve as a table for guests.

For now, Orlina Museum is occupying two units of the townhouse, with a floor area of about 370 square meters. He hopes to acquire soon the other two units, where he can do his expansion of the galleries and have a vacation residence for his four children.

In the lobby, serving as entranceway to the gallery, is a pair of door panels of colored-glass mosaic he created in 1983 and sold for P30,000. When he reacquired them at a bidding five years ago, it cost him P80,000.

On the second floor are two galleries that showcase his sculptures of crystal and glass, both figurative and abstract, in amber, blue, green, red or colorless.

His office is on the third floor. Here he keeps a collection of miniatures of his art cars, neatly displayed on a floor-to-ceiling étagère, which can be turned around and from which pulled out a trundle bed.

At a corner of the anteroom is a Vasarely-inspired sofa with upholstery in black-and-white Op Art motif, under a vividly colored geometric abstraction by Raul Lebajo.

On this floor, two galleries showcase Orlina’s works in bronze and stainless steel, including busts of President Cory Aquino and actor Piolo Pascual; a chandelier of elaborately wrought stainless-steel tubes; scale models of the UST Quattromondial Monument; the PBA trophy; and the Philip Morris sculpture. Encased in glass is a collection of sculptural rings and neckpieces he created.

All balustrades of staircases from basement to roof deck have been painted with the primary colors of Mondrian’s familiar grid.

“Our best-selling [points] here are coffee and art,” he says. “And, of course, the view. We have nearly 180 degrees of greenery surrounding the place.”

This is the ultimate view deck for visitors, where they can luxuriate in the nippy weather and the panorama of Taal Lake and Volcano, picture-perfect in the daylight and eerily beautiful in the twilight mist.

Below is an amphitheater and a sculpture garden sprawling on a 430-sq-m lot. Arranged in the garden are Orlina’s lighted sculptures of glass and stainless steel, a series of monumental geometric shapes.

The amphitheater can hold a modest-size audience for chamber plays and mini concerts. For such performances, Orlina may tap theater groups and musicians in Manila, where he is based.

He plans to employ at least three Art Management graduates to oversee the place; then he can visit only once a week. Of his children, he says the third, who’s taking up Multimedia Arts at College of Saint Benilde, shows the most interest in art. Once she graduates, he may put her in charge of the place.

Grand opening of the museum will be early next year, to be handled by Paseo Gallery, with an exhibit of works by National Artist Arturo Luz and painter Onib Olmedo. It will be held Jan. 27, in time for Orlina’s birthday.

This is an exclusive neighborhood, where House Speaker Sonny Belmonte, actors Vic Sotto, Sharon Cuneta and the late Charito Solis reportedly have properties. Wouldn’t neighbors complain about the ruckus at the amphitheater?