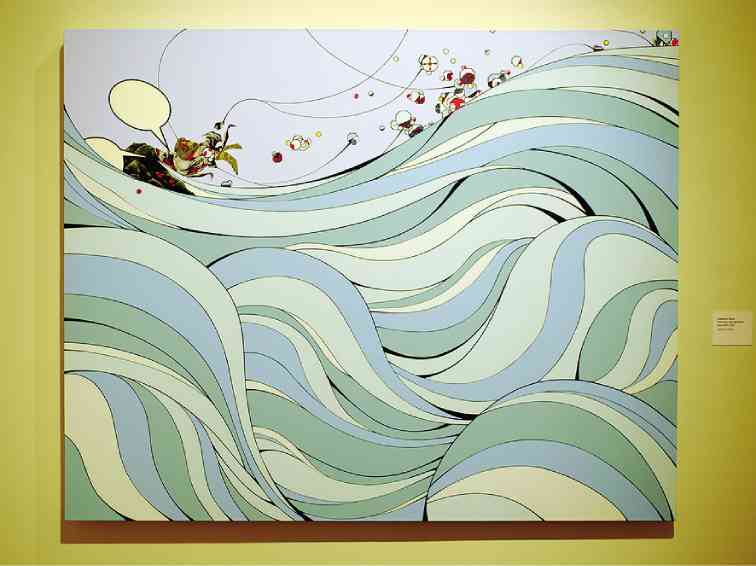 Tacloban-born Oahu-based painter Clarence Chun is literally making waves in Hawaii. His renderings of Oahu’s majestic waves have earned him the top prize in the Honolulu Museum of Art’s prestigious “Artists of Hawaii” exhibit.

Once every two years, the Honolulu Museum of Art stages its famous exhibition “Artists of Hawaii” showcasing the works of the best contemporary artists from across the state. This year’s exhibition, which opened to a crowd of over 1,000 art enthusiasts in mid-September, assembles an eclectic collection of works: ceramics, paintings, photographs, drawings, mixed media, sculptures and installations.

From 340 initial submissions, the panel of judges, led by the museum’s contemporary-art curators James Jensen and Inger Tully, chose 11 Hawaiian artists whose works are now featured in the museum’s premiere biannual exhibition.

Among the artists chosen was Philippine-born, Oahu-based painter Clarence Chun, who was also conferred the John Young Foundation Award, the exhibition’s top prize.

When exhibit curator and juror James Jensen informed Chun that the Honolulu Museum of Art had opted to buy one of his large paintings, Chun said it was his first purchase by a museum. Jensen then pointed to another of Chun’s paintings and said, “Well, that’s your second.”

Chun’s prize-winning work is a series of six paintings depicting the majestic waves of Oahu, the third largest of the Hawaiian islands.

“Since moving to Oahu, the ocean has been an essential part of my work,” Chun says.

“While swimming in the ocean, everything is in flux, so my visual perception of my surroundings constantly changes. I love the fact that even the horizon line moves up, down, and tilts.   It is these types of visual experiences, whether riding in a subway in New York, driving a car in Texas, or swimming the ocean in Hawaii, that I try to replicate in my work.”

Chun’s visual renderings are actually introspections on speed, time and memory. While studying at Yale University, his mentor Jake Berthot, well-known for his contemplative aesthetic, observed that Chun’s paintings were manic and difficult to look at.

Chun took Berthot’s criticism to heart and began to employ a tedious process with his works on canvas that require both skill and patience in copious measure. First, he applies a layer of multiple stripes freehand. Then he meticulously masks patterns on his canvas, cutting his own clean edges.  The last stage is painting micro, those randomly chosen but detail-oriented renderings drawn from multiple sources.

“The images are almost always painted in parts, never whole,” he explains. “This enables the viewer to recognize certain parts of the painting and question others. Also, the small details of the work make the viewer move back and forth while looking at the painting, like trying to catch a fleeting image.”

Born in 1975 in Tacloban City to Lino Chun and Kathleen Chapman Chun, the artist says his earliest memory was that of his mother drawing Filipino motifs on rice paper.

His family moved to the US in 1980 to join his mother’s relatives. Chun admits he didn’t grow up thinking he was going to be a painter.

“It wasn’t a conscious decision until undergrad,” he recalls, “where, after my first painting class, a couple of my professors really encouraged me to pursue art as a lifelong career.  At the beginning, I was still hesitant to fully commit. In fact, I double-majored in Business Administration and Studio Arts. The realization came when I noticed that I would call in sick for work to go to my studio to paint all day at the university.”

Chun shuttles between Hawaii and Texas where he teaches college-level courses in Art History and Painting. A Manila exhibit of his works is slated sometime later this year or early 2014 and is being organized by Gallery Big.

“Artists of Hawaii” runs until Nov. 24 at Honolulu Museum of Art. Visit www.honolulumuseum.org