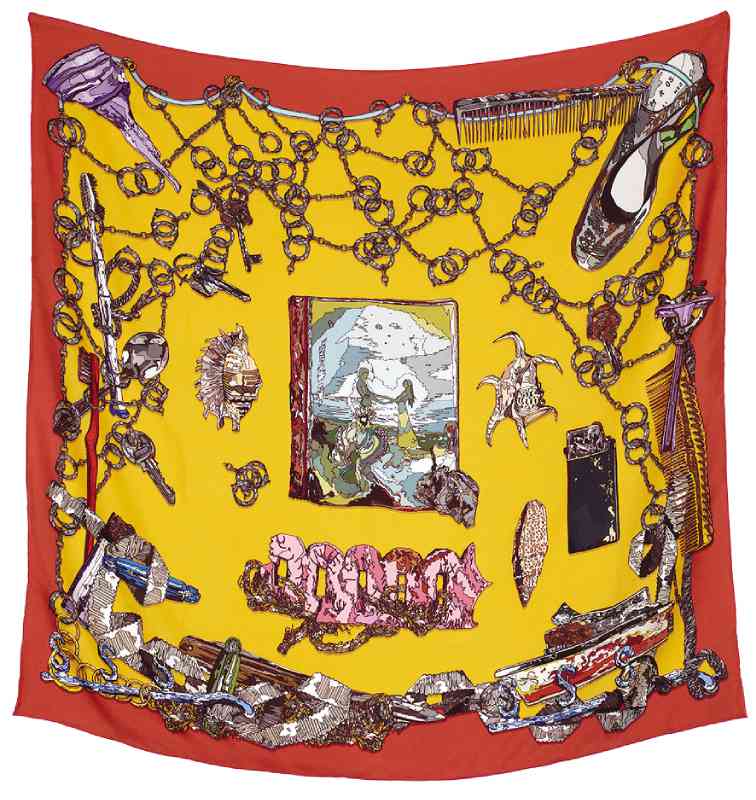 “EVERY Tool Is aWeapon” I

Tie me up, tie me down: Pio Abad’s scarf art

There is something innocuous, almost endearing, about Pio Abad’s latest works. Never mind the theme: politics and the Marcos regime.

No matter how touchy that subject is, on silk it looks, well, so chic. Most especially in pastel colors.

It’s Social Realism without the angst, from the point of view of a 30-year-old artist whose brush with martial law and human-rights abuses are secondhand from family tales and photographs.

“I definitely won’t be making the work I’m making without the political setting that I was brought up in, and these personal mementos repurposed as ready-mades anchor the work to that environment,” the London-based artist explains.

Abad is the son of Budget Secretary Florencio “Butch” Abad and a nephew of the late trapunto artist Pacita.

“My parents are always mildly amused and surprised when family photos or objects become part of my installations,” he tells Esquire Philippines. “I’d like to think that, on one level, the work can be a way of remembering moments from their personal history that, although not completely forgotten, have been buried under the demands of the present.”

Abad has been living in London since 2009, after five years in Scotland, where he earned his BA from the Glasgow School of Art. He was taking up Management at the Ateneo when the muses started calling.

It has paid off. Apart from shows in Glasgow, Copenhagen and Hong Kong, he has also exhibited at the Zabludowicz Collection in North London, where he constructed an installation based on the figures of the Marcos couple. For this, he was shortlisted in the 2013 Ateneo Art Awards.

Working on silk is something Abad has been developing over the past few years. He collaborates with printers who are experts in silk printing; the others have worked with a few well-known artists and designers, like the late Alexander McQueen.

Scarves, he explains, have traditionally served as commemorative objects. “As a formal device, it allows me to create these intricate drawings, but the piece also functions as an object, with its own material history.”

With images like smashed eyeglasses, chains that look like barbed wires and shoes with a missing pair, these scarves are the perfect gift for Imelda and her cronies—let’s just wish they read the fine print.

James Ong is the editor of Coconuts Manila (http://manila.coconuts.co), a website about news and things to do in Metro Manila.