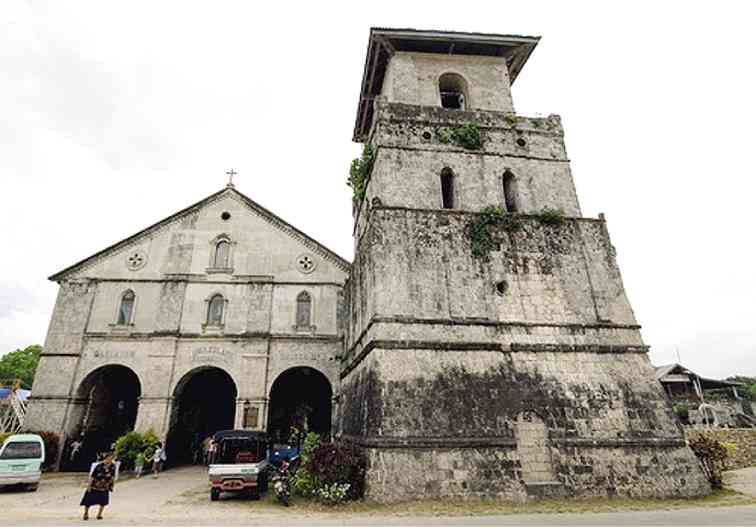 BACLAYON Church before the big quake. The choral music of Marilou Diaz-Abaya’s “Muro-Ami” was recorded in this heritage church.

Some heritage churches in Cebu and Bohol are memorable  because of the concerts that took place in them.

In the late  1990s, the Asian Youth Orchestra under Russian conductor Andrei Boreiko performed Beethoven’s “Pastoral” Symphony at the Basilica Minore del Santo Niño in Cebu. The acoustics was excellent but it was the ambience that gave the concert a historic stamp.

The same orchestra performed in Bohol at the St. Joseph’s Cathedral in Tagbilaran City.

Instead of the “Pastoral” Symphony (a perfect piece to perform in idyllic Bohol), the Asian Youth Orchestra performed a Shostakovich symphony as opening number.

The Shostakovich sound being what it is, the audience giggled in the opening bars. With the atonal nature of the sound, the audience probably thought the orchestra was out of tune. The reaction was innocent and spontaneous and it drew smiling faces from the orchestra members.

It was saddening to see the ruins of the Church of Our Lady of the Immaculate Conception in Baclayon, Bohol.

Six years ago, in Bohol, actor Cesar Montano showed me the interiors of the Baclayon town church, built in 1727 by the Jesuits with coral-stone blocks from the sea and egg white and plaster to glue the blocks together.

Before its gilded altars, Baroque and Classical inner façade and retablo of saints, I told the award-winning actor the church was  a perfect venue for a concert with its excellent acoustics

Earlier, I learned that film scorer Nonong Buencamino recorded the choir music for Marilou Diaz-Abaya’s award-winning film “Muro-Ami” in this church. The film was actually shot on Bohol Bay.

Although the façade and belfry of the church all went down after the quake, I am glad the church’s historic pipe organ, installed on the choir loft in 1824, was spared.

Experts say the Baclayon pipe organ has the character of Spanish Baroque organs, with parts that could mimic the sound of birds through the little pajarillo pipes. It can also enhance melodies with the tinkling of the cascabeles, an ornamental stop with bells on a wheel drum and campanilla.

With the assistance of Patricia Zobel de Ayala and the Ayala Foundation Inc., the organ’s pipes, wind chests, manual keyboard, pedal and other accessories were extensively repaired and restored to their original form.

To celebrate that successful restoration of the pipe organ, a concert was held in December  2008 featuring composer-conductor Cristobal Halffter and pianist Maria Manuela Caro on the pipe organ.

To keep it in tune for complicated parts of the music, the organ needed a focused assistant for its ornamental stop and its tambor (big wooden pipes) to create a rumbling sound similar to a drum roll.

Finally one heard the uses of the big wood pipes and reed stops with Juan Bautista Cabanilles’s “Batalla Imperial.” This piece was a musical replication of a military battle and was properly the most virtuosic piece on the program.

That last concert at Baclayon Church  was highlighted with Halffter playing Christmas carols from different countries. He concluded with a contemporary piece that ended with the use of the organ’s pajarillo pipes mimicking the sound of birds that we thought were the most charming and compelling number of the evening.

Speaking of historic concerts in church ruins, the members of the Manila Symphony Orchestra (MSO) received a pleasant surprise when an American clarinet player—who played in the historic 1945 concert of the orchestra in the ruins of Sta. Cruz Church—sent them a letter  asking how he could be of help to the orchestra.

Earl Smith wrote he arrived in the Philippines in 1945 with the troops that landed on Lingayen Gulf. They were soon transported to a destination north of Manila and housed in a big building with artillery guns nearby, where he could hear guns being fired all night long.

Then with the rank of a technical sergeant and a member of the 37th Infantry Division Band, with occupational specialty labeled as “bandman, clarinet #432,” Smith was soon assigned to the division chaplain, where he realized he had to secure music for various church services.

He ended up in Sta. Cruz Church, where now National Artist Antonio Molina—then the music director of the church—loaned him some music pieces.

The older Molina mentioned to the American clarinetist that the MSO was in rehearsal for a coming concert. Then MSO music director and conductor Herbert Zipper allowed him to sit in the rehearsal and soon found himself on the first chair of the clarinet section.

By way of introduction, Smith told Zipper he was a former principal clarinetist of the Oakland (California) Symphony and the San Francisco National Youth Orchestra.

Smith still has vivid recollection of that historic 1945 concert. When the musicians arrived at the church, workmen were still putting finishing touches on stage.

“The performance of Beethoven’s Symphony No. 3 was going along just fine when all of a sudden there was a loud explosion right behind me. If I didn’t believe in levitation before, I did now, as I must have come off my chair six inches or more,” he recalled.

His first thought was: “Has the enemy returned?”

They found out later that the explosion was caused by a large light bulb that got loose and went crashing down on stage.

That concert was also a most trying moment for most musicians. It was their first  concert without their soloist and concertmaster, Ernesto Vallejo, who had been killed by Japanese marauders along with his family in Tanauan, Batangas.

Zipper himself was nearly killed by retreating Japanese soldiers in Malate. He was one of those who survived the so-called Manila Massacre.

Violinist Basilio Manalo was soloist in a Beethoven concerto he had played a total of 25 times from Sta. Cruz Church to Rex  Theater.

Meanwhile; that postwar MSO concert at the church ruins received world-wide publicity with special coverage from such publications as Time and Life magazines.

In 1995, Zipper’s life was made into a documentary titled “Never Give Up:  The 20th-Century Odyssey of Herbert Zipper,” which won an Oscar nomination. He died in 1997 in Santa Monica, California, at age 92.

Less than three months after that special 1945 engagements with MSO, clarinetist Smith was recalled to the 37th Infantry Division Band for a possible invasion of Japan.

Smith told the present MSO members: “This was a very sad time, as I would have to leave my position in the orchestra and all of the friends I had made over the months. It was with sadness that our goodbyes were said. And thus ended an exciting period in my life.”