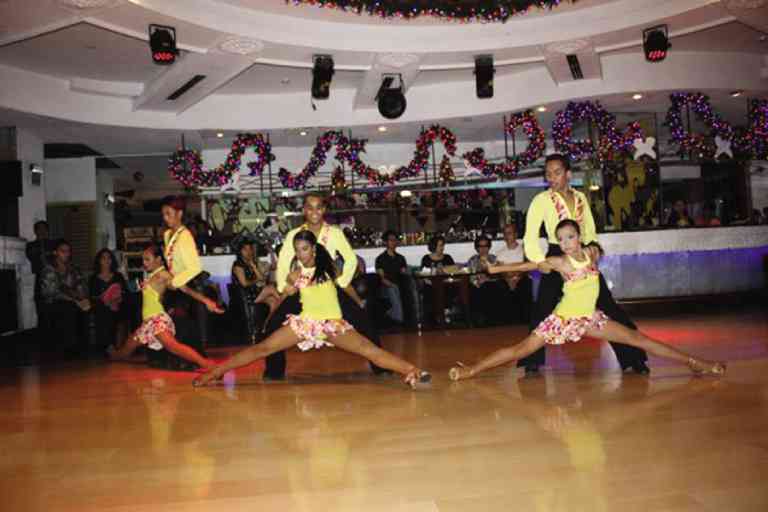 CHILDREN from underprivileged families are trained by Adora to perform and compete.

How she’s helping save streetkids through dancesport

From the ages of 4 to 15, the kids get serious about exaggerating their hip-sways in the rumba walk, syncopating their feet shuffles in the cha-cha-cha, and bouncing and kicking in the jive. If their partnering or timing is off, Adora calls them out.

It’s a miracle that these kids, who used to hang out in the streets, would embrace the regimented world of dancesport. But seeing the positive impact of dance on the children’s learning, social interaction and confidence, Adora has made it her advocacy to improve their lives through dance. The Belinda Adora Step Kids is a program that teaches ballroom dancing to the underprivileged for free.

On Nov. 12 at Solaire Resorts and Casino, she is presenting a fund-raising Latin dance show called “Passion with a Purpose.” The mini-concert will feature World Professional Latin dance champions Riccardo Cocchi and Yulia Zagoruychenko with the Belinda Adora Street Kids as the front act. The proceeds will go to the children’s training, competition entry fees and costumes.

Adora says the show is special because of the presence of the Italian Cocchi and the Russian Zagoruychenko, who are said to be the best in their fields. It is inspiring to see international dance champions rehearse, she says. They invest hours in perfecting their choreography, and when it comes to rehearsals, they shut themselves off from the distractions of the world.

Cocchi and Zagoruychenko will also be giving private lessons to advanced students and professionals.

Adora had just won the gold medal in the Southeast Asian Games in 2005 when she noticed that many kids in a seedy neighborhood in Antipolo were idle. One day, she gathered them, brought them to Savannah Moon in Quezon City and began training them in dance. Soon, some of the kids were competing in Batang Pinoy, the Philippine Youth Games organized by the Philippine Olympic Committee Sports Commission; Sayaw, organized by the National Commission for Culture and the Arts; and TV sows such as “Showtime” and “Talentadong Pinoy.”

“The problem in the Philippines is that we don’t have enough competitions to help dancers improve,” says Adora.

Over time, she has also been able to train teachers to look after beginners. Sergio Machon and his wife Lina Basas have been teaching the children in exchange for Adora’s private coaching. Today, Adora has 24 young couples who dance like pros.

The structure and disciplined nature of dancesport has trained the children to acquire quick reflexes and pick up dance steps quickly. Because of their solid technical training, they know the dance jargon and the timing. Sometimes, Adora merely dictates the dance terms and they are able to execute them.

“The kids have matured, although they still can’t flirt and act saucy. But their technique is there,” says Adora.

The kids also learn about studio etiquette and are well-behaved when they are in Savannah Moon. One dance student received a college scholarship in Bulacan after competing in “Talentadong Pinoy.”

Recently, because of the lack of studio space, Belinda Adora’s Step Kids moved their rehearsals to the covered court of a Christian school.

Adora says she owes it to dance patrons who sponsored her training and participation in international dance competitions. Step Kids is her way of paying back by sharing her knowledge.

Back in the late ’90s, no one in the Philippines was formally teaching the international ballroom dance styles. Adora and her then partner, Albert Dimarukut, would mimic the steps they watched on video. When she joined her first international ballroom dance competition, the dancing couple was clueless about technique and ballroom terminology. Before the actual competition, they would copy the steps of the other pairs and add them to their choreography.

Fortunately, cooperative souls such as Marvi Yulo, Ruby Co and Jocelyn Poon helped Adora and her partner fly to Hong Kong to be coached by Scott Todd. Todd was pleasantly surprised that the couple learned quickly despite their lack of dance fundamentals.

Through the years, Adora has been traveling around the world to improve her craft and to compete internationally. She cites Espen Salverg, a former world dance champion from Norway, as one of her most influential mentors. Salverg taught her the logic of the movements and how to adjust her technique according her body structure, which made dance more precise and enjoyable for her. Whenever Adora felt insecure about her lack of experience compared to other competitors, Salverg would affirm her greatness.

Adora recalls doing a group cha-cha-cha with other international champions, including Cocchio.

“I was nervous being with these great and seasoned dancers. But Espen said, ‘Be confident. You are the pride of Asia.’”

With all her experiences, Adora has earned a reputation as an exacting coach. However, students benefit much from her diligent eye.

“When I’m too old, who will inherit my technique? At least, while I’m still dancing, I can pass on my legacy to these indigent but talented children,” she says.