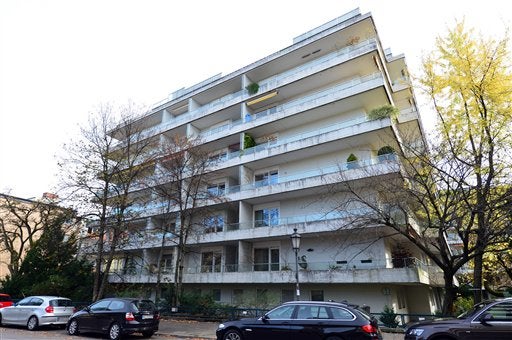 Cars are parked outside the apartment building in Munich, Germany, Monday, Nov. 4, 2013, where 1,500 artworks were found. AP

AUGSBURG, Germany  — German officials say a huge hoard of art found last year at a Munich apartment included works ranging from Pablo Picasso, Marc Chagall, Max Liebermann and back to the 16th century, some of them apparently seized by the Nazis.

Investigators said Tuesday they searched the apartment on Feb. 28, 2012, as part of a tax investigation that started with a routine check on a Zurich-Munich train in late 2010. They said they found 121 framed and 1,285 unframed paintings, in good condition.

Prosecutor Reinhard Nemetz told reporters in the Bavarian city of Augsburg that investigators have turned up “concrete evidence” at least some works were seized by the Nazis from their owners or art considered “degenerate” by the Nazis.

Officials say some of the works were previously unknown.