What toxic substances are in your kid’s toys | Inquirer Lifestyle ❮ ❯ 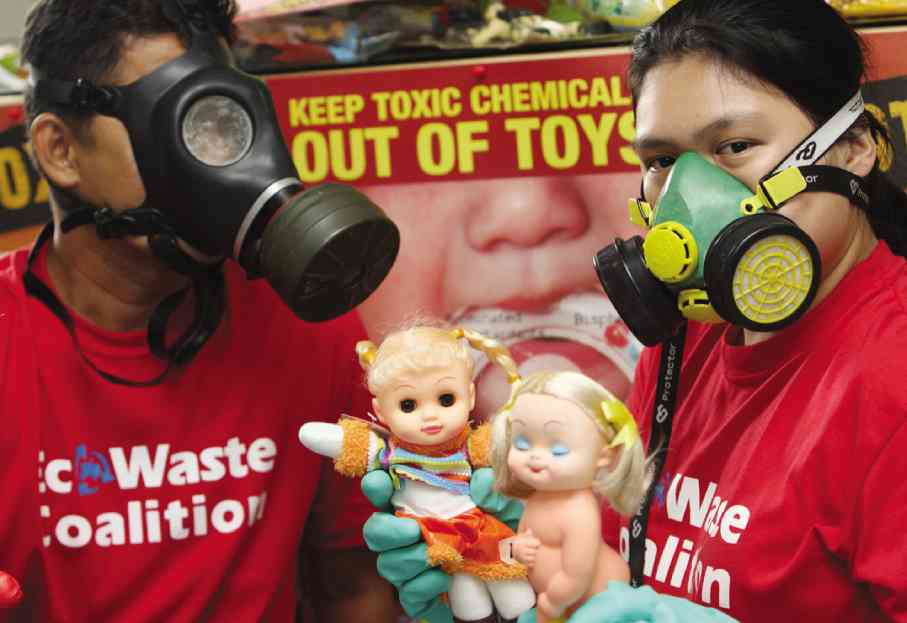 MEMBERS of the environmental watchdog Ecowaste Coalition inspect toys which are tested for hazardous and toxic substances at their main office in Quezon City. They warn the public in buying toys as Christmas gifts that contain harmful chemicals like lead. MARIANNE BERMUDEZ

What toxic substances are in your kid’s toys

I love how we celebrate Christmas practically half the year. As soon as we hit the first “ber” month, the countdown begins, Yuletide carols play on the radio, and the malls start sprucing up for the holidays. Before you know it, friends and family start arriving from all corners of the globe, and the never-ending celebrations begin.

Indeed, when it comes to celebrating the season, nobody does it better than Filipinos.

Unfortunately, not everyone shares our love for the season. Thanks to irresponsible manufacturers, we have a problem with the amount of toxic toys on the market, here and abroad.

Not enough people take seriously the warnings against toxic toys. Unlike obviously dangerous items such as firecrackers or poisonous cleaning agents, toxic ingredients in toys are hidden behind the beautiful swirling colors of a doll’s dress or the bright lights and sounds of a remote-control race car.

None of us would dream of intentionally hurting children, yet by placing these toxic toys in their hands, that’s exactly what we are doing.

It is so easy for lead and other metals and particles to enter the bodies of children. The toxic chemicals are so minute they are measured in “parts per million” on toy surfaces.

As such, these chemicals and metals easily contaminate the children when they put these in their mouths. Contamination can also be through their hands.

Children have developing organs which are vulnerable to the dangerous effects of lead and other chemicals. They absorb these toxins more quickly than adults do.

Among the harmful chemicals and metals in toys are phthalates, which are “softening agents found in vinyl products.” This has been linked to reproductive and infertility problems in animal tests and studies conducted on people.

Phthalates are usually found in polyvinyl chloride or PVC, which is why many countries are now trying to ban the use of PVC in children’s products.

Another chemical to watch out for is the carbon-based synthetic compound bisphenol A, or BPA. This used to be a very popular component for making baby bottles, but has since been discovered as an “endocrine disruptor,” which means it acts like estrogen and can cause negative effects on the body when absorbed in large dosages.

Some countries such as Canada and the European Union have chosen to ban the chemical, while others like the US are still studying how significant the levels and effects are on people and children. Many manufacturers have since stopped using BPA in their bottles and children’s products.

Lead and other metals such as chromium, cadmium (a popular lead substitute) and arsenic (found in pesticides, car batteries and lethal poisons) are among the most common yet dangerous components in toys—they are usually found in paint.

And since paint is the final “layer” on most toys, it is hardly surprising that it finds its way into children’s bodies.

There is a “safety” limit of 90 ppm from toxins set by the Department of Trade and Industry, though many argue there is no such thing as a safe level. The limit is based on that of the US Consumer Safety Commission.

A recent study by the EcoWaste Coalition of more than 200 toys from six different cities in Luzon, Visayas and Mindanao shows that some toys have as much as 7,035 ppm lead! That is almost a hundred times over the safety limit set by the government.

I wish there was a simple way of detecting lead and other chemicals in the toys and items we buy for our loved ones, but unless you have a portable X-ray fluorescence (XRF) device, all you can do is use your instinct and be extra vigilant.

According to Pia Ranada of rappler.com, avoid “toys with flaky paint as they are likely to contain lead.”

Steer clear of shops without government licenses to operate, as their products are more likely not to have been tested and monitored by the DTI.

If you are buying bottles and pacifiers, choose reputable brands which are more likely to be BPA- and PVC-free, or check labels.

Aside from choosing the right toys to give, as parents, we must keep an eye on babies and young children. It is close to impossible to prevent a baby from sticking toys into his or her mouth, so avoid leaving a baby alone with tempting toys. Leave them with soluble crackers or soft fruits instead, or toys difficult to chew on.

The age-old practice of washing hands before eating is also very much applicable. Make your kids wash their hands after playing with toys.

Let us not treat toxic toys like child’s play. It is a serious matter which, unfortunately, has not been given the attention it deserves. Although recently the government passed RA 10620 or the Toy and Game Safety Labelling Act, everyone must remain vigilant against these harmful toys, especially in this season of gift-giving.