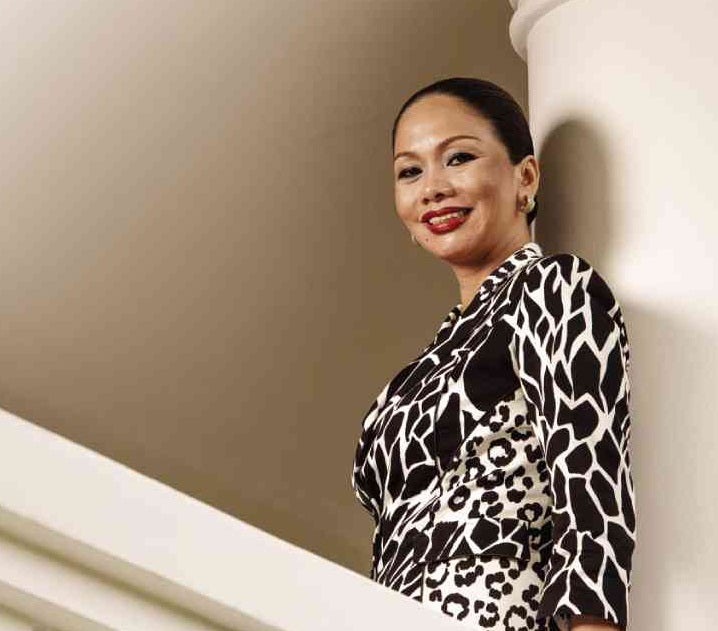 When debonair Italian ambassador Massimo Roscigno is invited to be a judge in a beauty contest, his Filipino wife, Agnes, tags along. She says in jest that she’s making sure that he comes straight home after the event.

When he was posted in Los Angeles, Roscigno playfully rebuts that Harrison Ford, Anthony Hopkins and Michael Keaton (at the peak of his “Batman” fame) were trying to hit on Agnes.

The Roscignos have been familiar faces on Manila’s social scene since the late 1980s. Friends from café society call the envoy by his first name.

The story of how they met is an oft-repeated one.

Agnes Ventura and her brother ventured into the marble business. One fateful day in 1988, she went to the Italian embassy to inquire about machinery for cutting marble.

Roscigno, then deputy chief of mission, was also trade counselor. Instead of a flabby middle-age man, he turned out to be a young, buff and tan diplomat.

“I had an instant crush on him. That’s my man,” she recalls. “I asked him out to dinner, and we’ve never stopped dating since.”

Ask Roscigno if Madame Agnes really made the first move and he will evade the question. Now that’s a real diplomat.

When Roscigno returned to Italy to work in the Ministry of Foreign Affairs, Madame Agnes would fly there three times a year.

“If you want the relationship to work, you’ve got to work hard at it,” she says.

Work hard she did. After seven years of courtship, they were married in Rome in 1995. She sacrificed the comforts of home to embrace her husband’s culture.

Three days after the wedding, the couple went to Beirut, Lebanon, when it was still reeling from civil war. The infrastructure, from power supply to roads, was still under rehabilitation. The newlyweds experienced frequent power outages, traffic gridlock and two bombing incidents.

Still, Madame Agnes enjoyed Beirut. After  six months, she adapted to the battle-scarred country, enjoying the weather and the people. “You can ski in the morning and swim in the afternoon,” she says.

She picked up the Arabic word malesh, which means “it’s okay” or “it doesn’t matter.”

“I learned resiliency from the Lebanese,” she says.

During the blackouts, she kept herself busy reading her husband’s diplomatic protocol book. “It taught you how to address people by rank and how to do diplomatic seating arrangements.”

After Beirut, he was promoted to consul general in Los Angeles. Madame Agnes was tasked to look for a place for the Italian consulate general’s residence. She found it at 2002 Loma Vista Drive, Beverly Hills—the former residence of singer Dean Martin.

Designed by architect Richard Neutra, it was an astounding, modernist glass  mansion with a bar fronting the large swimming pool. It was meant to be a party house, not a place to raise children.

It was at this time that Madame Agnes gave birth to their only child Ursula.

The consul general’s residence became a venue for Hollywood parties, since there was a significant population of Italian-American actors and production artists. Producer Dino de Laurentiis, a close friend of Roscigno and who fondly called Madame Agnes “La Consulessa,” would invite the movie stars.

Roscigno had the support of Italian-American restaurateurs, who were more than happy to do the catering.

“These were second-generation Italians who felt they had ties to Italy and wanted to give back,” says Madame Agnes. “I was touched. You would think that Hollywood was superficial, but I met some of the kindest people there.

“The Italian-Americans helped my husband entertain and represent Italy. You don’t want to lose that influence in Hollywood. Aside from actors, there were production designers, editors, cinematographers and others who worked behind the scenes. My husband had to work hard on that.”

The envoy also held parties for Nicolas Cage and Stephen Mirrione, when the latter won the Oscar for Best Film Editing in “Gladiator” in 2001.

Asked for any unforgettable incident, aside from getting smoked out as the house of neighbor Drew Barrymore burned, Madame Agnes replies, “I was smoking in the garden. Someone came up to me and said, ‘Excuse me, can you please not smoke?’ in my own house. I had to stop so as not to embarrass the guest.”

After a four-year posting, the Roscignos  returned to Italy, where Madame Agnes enjoyed being homemaker, mother and tourist in “one of the most beautiful countries in the world.”

In Rome, she would buy ingredients in Filipino stores and cook tinola in winter, and also serve adobo and lumpia. When Roscigno, then with the foreign ministry’s protocol office, would go on a five-day mission with the prime minister or the president, she would cook tuyo. “The smell would be out of the kitchen when he got back,” she says.

Shanghai was another exciting posting. The couple was able to rent a heritage villa in the French Concession, a former premier residential area for expats before the war, and now a tourist destination.

They occupied a house built by Hungarian architect Laszlo Hudec, touted as prime mover of the Art Deco movement in Shanghai in the early 20th century.

“My husband would hold office in a skyscraper, then he would come home to this heritage house. It was such a contrast,” says Madame Agnes.

A highlight of Madame Agnes’ stay was working with consular spouses in organizing an art exhibit to commemorate the 100th anniversary of International Women’s Day at Shanghai Art Museum.

“The Philippines may be home, but it’s another diplomatic world,” says Madame Agnes.

Typical of patrician European homes, the house is furnished with Roscigno’s heirloom pieces. Madame Agnes could tell the provenance of each work.

Her favorite is a gilt-bronze console with fancy marquetry by French cabinet-maker André Charles Boulle. The house is also furnished with Louis XV and XVI chairs, a Louis XV secretaire, and her mother-in-law’s favorite Louis XV dining set with cabriole legs and gold finish.

These pieces coexist with a Syrian table and an old door that is tacked on the wall.

A drawer called sentimino  (seven drawers) has three trick drawers that are actually disguised as one. They reveal porcelain cups and containers that were wedding souvenirs of Emperor Napoleon Bonaparte. An intricate painting portrays Bonaparte crowning his bride.

Madame Agnes says there are many unpacked boxes which contain more European antique furniture and artworks by the masters.

Having settled down, the Roscignos have slowly began hosting dinners.

The residence’s secret weapon is chef Dionysio Borja, who has served four ambassadors. He has learned to cook Italian dishes and decorate tables.

Madame Agnes says she’s lucky that the embassy residence staff works to create unforgettable experiences. The meals follow the order of antipasti, pasta, steak or chicken or fish, and the rich dessert, all accompanied by Italian wines.

On her insights as a diplomatic spouse, Madame Agnes points out: “Diplomats study to become diplomats. When we got married, we weren’t taught. There is no formal education to become a diplomat’s wife. You have to learn your way around. We had a support group of wives from the foreign ministry in Italy where we had training. Still, you need coaching. I was also lucky to observe wives of senior diplomats.”