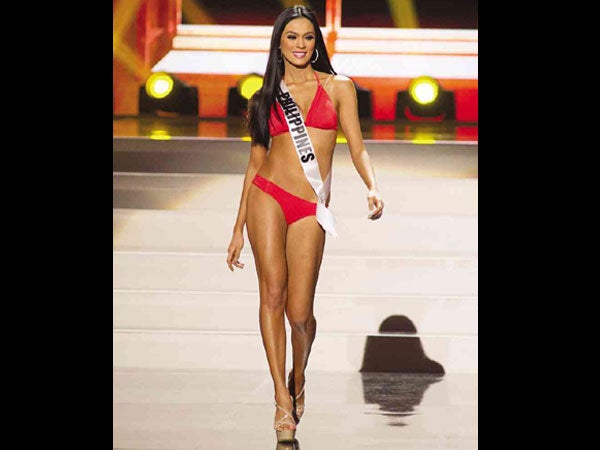 The Philippines’ Ariella Arida and two other contestants from Mexico and Russia received the biggest cheers in the swimsuit and evening gown competitions during the preliminary round of the 2013 Miss Universe pageant being held in Moscow.

Russia began hosting the pageant for the first time in its 61-year history, with contestants from 86 countries shimmying along a catwalk at Crocus City Hall on Tuesday (Wednesday in Manila).

Politics came near to overshadowing the glitz as one US host refused to come in protest at an antigay law, while the contest’s owner, Donald Trump, declared US whistle-blower Edward Snowden, who is living in hiding in Russia, persona non grata.

The swimsuit and gown competitions, along with the closed-door panel interview with the judges, will determine the semifinalists, who will be announced during coronation night on Saturday (Sunday in Manila).

Widely tipped to take the crown this year is Miss Philippines Arida, a 24-year-old chemistry graduate from the University of the Philippines Los Baños. The Philippines has so far scored two big pageant victories this year—Mutya Datul as the first Asian winner of the Miss Supranational pageant and Megan Young as the country’s first Miss World.

During the preliminary round, participants strutted across a stage with a backdrop of onion domes, first in black and red bikinis, and then in sparkling and slinky evening dresses. The women did not speak except to give their name and country.

Arida, Cynthia Duque of Mexico and Elmira Abdrazakova of Russia drew the biggest cheers and were greeted by flag-waving fans.

Arida also cracked the favorite list of Frenchwoman Ines Ligron, who used to send Japanese delegates to the Miss Universe pageant, including 2007 Miss Universe Riyo Mori and runners-up Miyako Miyakazi and Kurara Chibana. Ligron drew her list of 30 favorites before the preliminary round.

The Filipino not only figured on the list of international beauty experts but was also chosen to appear in several other activities where only a few delegates were tapped. Arida had the most number of appearances among the contestants.

She was among nine who joined 2012 Miss Universe Olivia Culpo in shooting the music video of pop singer Emin Agalarov, whose family company built the pageant venue, Crocus City Hall. The singer, known as Emin, is also the son-in-law of the president of Azerbaijan, Ilham Aliyev, and performed at the Eurovision song contest when it was held in Baku last year.

Arida joined 24 others in the Moscow Fashion Week presentation of Tony Ward Couture and was the lone Asian among six chosen to shoot a TV commercial for Germany’s automobile giant Mercedes-Benz. She and 11 others took part in the Nobu Kitchen demo and visited a children’s hospital in Moscow.

The organizers promise the unveiling of a million-dollar “emerald, ruby and diamond” swimming costume on Saturday, which the winner will get to wear.

While hardly a trailblazer on gender issues, Miss Universe this year has prompted a row on gay rights.

The show’s initial cohost Andy Cohen, who is openly gay, pulled out in August because of the choice of Russia as the venue. He criticized a law passed by Vladimir Putin in June that barred promoting homosexuality in the presence of minors and has prompted international concern that it could be used to crack down on gay pride events.

However NBC host Thomas Roberts, who is also gay and has married his partner, has taken over the role.

“I choose to offer my support to the LGBT community in Russia by going to Moscow and hosting this event as a journalist, an anchor and a man who happens to be gay,” he said in a statement, while calling Russia’s treatment of gay people “unacceptable.”

Miss USA Erin Brady said she understood why Cohen pulled out. “I think a lot of people had mixed emotions coming here. If that’s something he believed in and he didn’t feel comfortable, then I support that,” she told Agence France-Presse.

But she said Roberts “had a different outlook on it, he thought: well you know what, I want to come here and show people that it’s OK.”

The show’s billionaire owner Trump took to Twitter last month to bar National Security Agency leaker Snowden from attending the show. “Message to Edward Snowden, you’re banned from @MissUniverse. Unless you want me to take you back home to face justice!” he wrote.

Snowden is believed to be living in or near Moscow after leaving its Sheremetyevo airport for a secret address in August.

Trump issued an invitation to Putin, however, telling NBC in October that: “We have invited Vladimir Putin and I know for a fact that he wants very much to come.”

“It would be beautiful to have him there and I would be honored to meet him,” said Miss USA Brady.

The contest began in Palm Beach in 1952 and still bans its contestants from being married or pregnant. Complete with swimsuit round, the contest remains hugely popular, particularly in Central and South America.

Russia won the Miss Universe pageant in 2002, but the policewoman Oksana Fyodorova was dethroned after US shock jock Howard Stern provoked her into chatting about her sex life. She now presents a children’s television show.

The Philippines already has two Miss Universe winners—Gloria Diaz in 1969 and Margie Moran in 1973. Filipino bets advanced to the Top 5 in the last three editions.

Filipinos and fans from around the world may help boost Arida’s bid to become the Philippines’ third Miss Universe winner by casting their votes at www.missuniverse.com. The winner in the online poll automatically advances to the semifinals.

Judges for the main show will include Aerosmith singer Steven Tyler and flamboyant Russian pop king Filipp Kirkorov, while ex-Spice Girls star Mel B will cohost.

The coronation night will be seen live on Star World and The Velvet Channel at 2 a.m. on Sunday.—With reports from Armin Adina and AFP