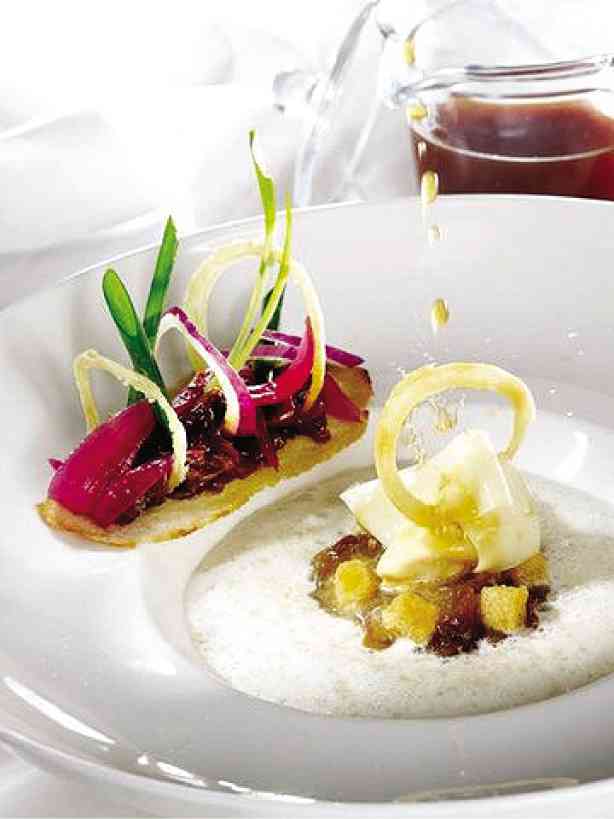 To his credit, chef Nicolas Isnard doesn’t feel a need to conform to the trends deemed politically correct in the culinary world. He dismisses the use of organic products, for instance, as more of a marketing tool. “I don’t use organic (products) just for the sake of using organic,” he says.

For him, what matters more is that he knows and trusts his suppliers.

“What’s more important is that the products are the best,” he says. “Whether it’s organic or not, it’s not a problem.”

Similarly, he doesn’t believe in outlawing foie gras. Its current ban in California, he says,  is “stupid.” After all, it doesn’t kill anybody, and even some Americans themselves think the ban is stupid, he says.

Most recently, L’Auberge de la Charme, where he’s chef and one of the partners, earned one Michelin star within a year of its operations.

Located in the Dijon area in the south of France, the restaurant also boasts four toques from the influential French restaurant guide Gault et Millau.

All these accolades are but natural outcomes of his drive for excellence. To ensure the freshness of what he serves, Isnard goes to the market every day and chooses the ingredients

himself. Going by what’s fresh and what’s seasonal, he changes the menu and recipes in his restaurant accordingly.

His favorite ingredients include tomatoes, artichokes, zucchini, spring onions and lemon vinegar—which he always has in his kitchen and which he describes as having a “fine balance between sweet and sour.”

A strong commitment to work ethics and to his clients is another driving force. “While at work I am in my bubble, where nothing matters except the clients,” he says.

This passion for food dates back to a childhood spent in the south of France, within waving distance to the Mediterranean Sea.

“The sea was my childhood,” he recalls.  Because of the family’s Italian roots, they cooked a lot of pasta, polenta and other dishes. Though he didn’t stick to standard recipes, he learned the importance of using the right tomatoes and the right pasta, and eschewing the use of artificial ingredients.

At age 14 he told his parents that he wanted to be a chef, but they objected; that would make him the first person in the family to “cook for work.”

Nevertheless he went on to pursue culinary studies and to apprenticeships in some of France’s leading restaurants. The Michelin stars would soon follow.

Today, with his strong foundation in French cuisine, Isnard confidently uses modern techniques on classic recipes, imbuing them with a subtle blend of flavors, aromas and colors.

One of his signature dishes is French onion soup, which he adapts to local flavors, changing the dressing or the texture while keeping the taste the same. “It’s simple but different,” he says.

Another signature dish is bouillabaisse, a fish stew especially dear to Isnard because of its association with Southern France. Not only does he cook it with saffron and the freshest seafood, he also adds eggs, which he says is how they’d eat it in France.

A distinguishing mark of his cuisine is the artistic presentation, which he feels is important since we eat with our eyes as well. Garnishes are placed in gravity-defying positions, vegetables are cut into fine geometric shapes, while a whole dish can be arranged in alternating symmetrical patterns.

With his fame and solid reputation as a Michelin-starred chef, Isnard gets invitations to travel the world. He has cooked in places as diverse as Beijing, Dubai, Moscow, Abu Dhabi, Singapore, Saigon and Casablanca, as well as at the Mandarin Oriental hotels in Jakarta and Macau.

These travels have allowed him to taste exotic cuisine, such as the street food in Bangkok, the pepper crabs in Singapore, and the menu at the two-Michelin star Amber Restaurant in Landmark Mandarin Oriental Hong Kong, where he recalls having one of his best meals.

Isnard’s next trip will be to Manila, where he’ll be guest chef at Mandarin Oriental’s Tivoli Restaurant from Nov. 18 to 24. He’ll also conduct a cooking class on Nov. 23.

Diners can choose from a degustacion menu, a business lunch menu and a la carte dishes.