Now, this is the ‘mother’ of all buffets | Inquirer Lifestyle 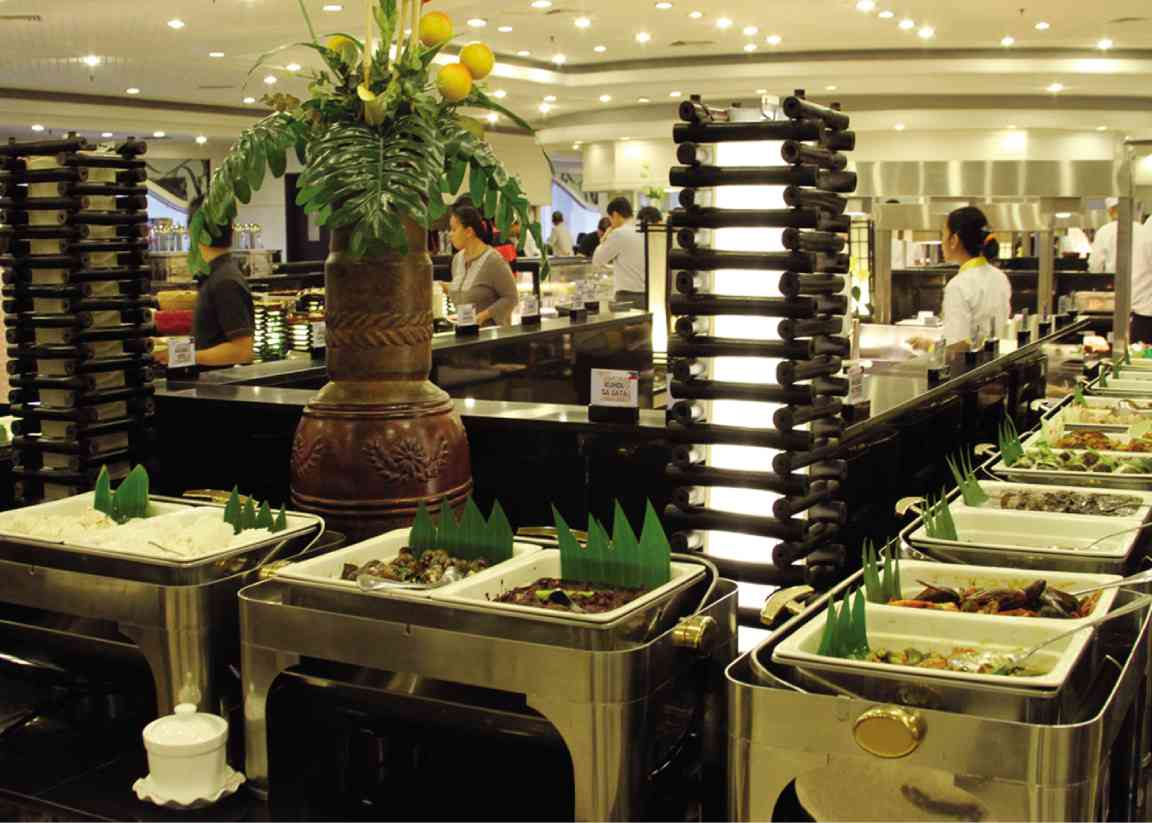 BUFFET stations are more accessible to the diner.

Now, this is the ‘mother’ of all buffets

Behind the granite counter, the server slices three-inch thick slabs of beef and pork before the customer. Tender and chewy, these grilled meats, called churrascos in Brazil, are on long skewers with juicy tomatoes.

The experience of a churrascaria, the Brazilian grill or steakhouse, is recreated at the SM Megamall branch of Dad’s, the restaurant famous for its copious buffet selection at an affordable price.

There’s the Indonesian satay with chicken and beef morsels, barbecued then bathed in a welcome treat of peanut sauce.

The Greek souvlakis—smaller skewers of tender cuts of beef and chicken—are marinated in white wine and lemony olive oil mixture.

The Indian lamb kebab is served with classic mint and coriander chutney, while the Greek lamb kebab is made zingy with lemon, olive oil and herbs.

All the grill items are cooked slowly to allow the meat juices to dictate the flavors.

Trailblazing restaurateur Victor Vincent “VicVic” Villavicencio says Dad’s Restaurant is offering the whole world on your plate for only P748. This includes the Kamayan and Saisaki fare and its fruit shakes.

To celebrate Dad’s 20th anniversary and Villavicencio’s birthday this month, the Dad’s World Buffet will cost only P488 for lunch and P688 for dinner on weekdays. The P748 buffet is on weekends and holidays.

Villavicencio has been in the restaurant business since 1977, starting with the iconic Filipino restaurant Kamayan, followed by the phenomenal success that was Saisaki.

In 1993, Villavicencio introduced buffet dining at Dad’s at SM Megamall, which also integrated his restaurant concepts.

“When the buffet became popular, we folded our short-order restaurants into the buffet. We used to call it Dad’s Crossover because you paid a certain price for the Kamayan buffet, complete with the lechon, and a certain price for Saisaki. If you wanted the whole thing, there was another price. Through the years. we have added dishes, but we never told the public about it,” he explains.

“If you make the buffet cheaper by removing expensive items, I think that’s a cop-out. In our case, whatever price we give you, it’s the same premium items every day. We discount to encourage you to come on those slow days. That’s all we did, discounted the price at certain times, but we never discounted the quantity of the food.”

With the introductory price of P748, Villavicencio says he’s giving customers value for money because the fee includes juices.

Typical of Villavicencio’s out-of-the-box thinking, there is no service charge since he believes it’s the restaurant’s job to serve guests with enthusiasm.

“I believe in value for money. I don’t like to hear P900 and P1,000. People go to a buffet for quality and choices at a reasonable price. But at a certain point, the prices have become unreasonable.

“Others will have a drink bar, but they won’t tell you until you find it. Here, we have Four Seasons, watermelon, mango, green mango, dalandan, buko pandan, carrot and banana shakes.

You can order four at the same time. We put the shakes in small glasses not because we are being stingy. If you like the shake, you can order another in a different flavor.

“Our drinks are bottomless and interchangeable. But we ask you to finish it. We are generous with our food. If you go around, we ask you to try it. We don’t hide it,” says Villavicencio.

He offers other perks. For every 10 buffet guests, one is free of charge (except for the P488 buffets). Birthday celebrators get free buffet.

To get the new concept off the ground, the layout of Dad’s SM Megamall was made even more accessible to diners, with the food stations just a few meters away from the tables. The spaces between the stations are wide enough not only to avoid queues, but also to lure the diners.

The carving station is at the prime section. Crisp golden-skinned turkey (with stuffing in anticipation of Thanksgiving and Christmas) and the New Zealand roast leg of lamb with pinkish insides are a tempting sight.

For dieters, the firm-fleshed mahi-mahi, its flavor stronger than whitefish, is seared and served with light tangy sauce.

There are also global variants for the salmon and tuna. In the seafood grill, the salmon is moist and meaty to satiate the hard-core carnivore, while the tuna is distinctively flaky and firm with a rich, powerful flavor.

There are also curry choices. Depending on the country of origin, the main ingredient is determined by the color—yellow for turmeric, green for green chilli and red for chilli powder.

The mild seafood massaman curry from Thailand is boiled in slightly sweet coconut milk, then thickened with peanuts and made flavorful with fish sauce and other spices that define Thai cuisine.

The Malaysian curry is dominated by coconut milk, more than the layering of red chillies, slowly cooked onions, lemon grass, a dash of turmeric and chunks of slowly braised beef and lamb.

Velvety and voluptuous, the Indian chicken curry delivers the most intricately blended and pungent spices of all.

Dad’s selected the dishes that have made it to the World’s Best List.

The Chinese section has the sharp, fast-fried dishes from Szechuan and the tender, slightly sweet Cantonese cuisine with its repertoire of noodles, soups, delicacies, mellow sauces, rotisserie meat, seafoods and dimsums.

In the Mexican section, you can make your own fajitas, grilled meat with side servings of bell pepper, bell pepper onion, guacamole, sour cream and salsa into a warm, flour tortilla.

Then there are the familiar Spanish food such as the lengua, hearty callos made with soft tripe, chicken relleno and the steamy pan of paella, topped with shrimp, lobster, mussels and cuttlefish.

The Italian lasagnas are either infused with tomato sauce and minced meat or béchamel sauce.

Going Americana, the buffalo wings are marinated in spicy sauce and cooked to a crisp with tender insides.

For the cool months, the thick and creamy seafood chowder with freshwater fish and shellfish is the ultimate comfort food, unless you want to head to Kamayan’s arroz caldo or the flavor-packed ginataan for merienda.

Next to the carving station, the Saisaki buffet is the most popular, with its wide array of sushi, sashimi, cold noodles and Japanese grilled items.

The Kamayan buffet has the classics—pritchon, kambing, kuhol, buro, freshly made halo-halo, puto bumbong and  bibingka.

Villavicencio estimates that Kamayan offers some 70 entrées—achara not included. You pay P468 for entrees, P648 if desserts and drinks are included.

In exchange for Dad’s bounty, Villavicencio has one request: Be eco-friendly by avoiding leftovers on your plate.

Other Dad’s outlets will offer the World Cuisine next year: Glorietta in January; West Avenue in February; Padre Faura and Edsa in March.