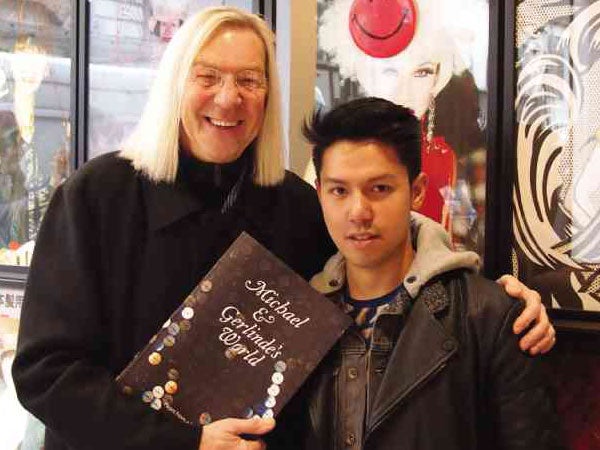 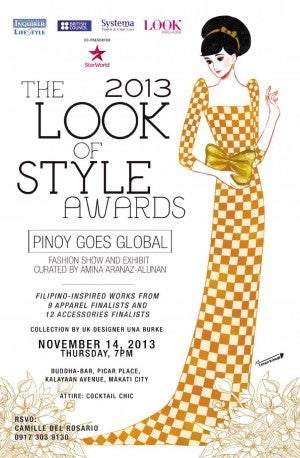 More than anything, Alzaté just wanted to showcase what he could create, particularly the fabric he had developed with weavers in Kalibo, Aklan, a kind of hybrid piña.

It’s this motivation he hopes to see in this year’s contestants. “I hope the finalists would give it their mightiest best…to compete well-prepared,” says the head fashion consultant of Suyen Corp. (HerBench). “I believe that you have to give your best in every way you can even if it’s just for your self-fulfillment.”

Since it was started four years ago by Look Magazine, Inquirer Lifestyle and the British Council, the Look of Style Awards has been gaining prestige because of the opportunity it gives budding designers to gain exposure and access to Central Saint Martins. This is the significant effort of the British Council.

The past winners are Pablo Cabahug, who now has a growing clientele, and Geof Gonzales.

For the first time last year, the Look of Style Awards went on a nationwide search for designer participants.

This year, it  has two categories—apparel and accessories. There will be two winners.

The finalists’ collections will be presented in a fashion show on Nov. 14 at Buddha Bar on Kalayaan Ave., Makati City.

Both winners will receive an all-expense-paid trip to the United Kingdom.

The winner of the accessories category will be given the opportunity to enroll in a short course at Sheffield Hallam University in South Yorkshire.

As in previous Look of Style winners, the designer who wins the grand prize in apparel will go to the prestigious Central Saint Martins (CSM) in London, also to take up a short course.

Alzaté spent three months at CSM, from March to May, and in that period took up short courses: Creating New Concepts; Building a Fashion Collection; Designing a Fashion T-shirt Collection; Exploring Your Fashion Design; and Cool Hunting Fashion.

The most difficult course, he says, is Creating New Concepts.

“The class challenged all the rules and standards I have in fashion. I felt ‘raw’ after that class, exhausted,” says Alzaté. “But I learned so much about ‘getting inspiration’ not directly from fashion, but from life in general, then turning it into a story through fashion.”

Alzaté spent a lot of time outside the classroom as well. He explored museums and galleries, like the David Bowie Gallery and Hayward Gallery. He took time to watch plays such as “Matilda” and “The Lion King,” taking in as much art as he could to further inspire his craft.

Shortly after his London stint, Alzaté found himself in Canada, where he presented his first Bench collection and Roland Alzaté collection at the 1st Canada Philippine Fashion Week, held last June.

He’s also in talks with other retail companies abroad.

“I feel much better now when I design. I explore more now rather than just go with everything I get inspired with and draw. I try to look deeper,” Alzaté says. “The experience at CSM made me a lot more explorative.”

Before winning Look of Style, Alzaté won “Weaving The Future,” a design competition by the Fashion Design Council of the Philippines. He has also had a number of high-profile clients, among them Lucy Torres-Gomez and Cindy Yap Yang (McDonald’s Philippines).

He learned about fashion design and business mostly from his two-year apprenticeship under Noel Crisostomo.

“He (Noel Crisostomo) allowed me to play a part in every aspect of the design process,” says Alzaté. He also apprenticed a couple of months for Francis Libiran, who helped him “gain interest on softer fabrics, flirtatious designs.”

Like any fashion designer, Alzaté hopes to become a global icon. He’s even making a list of VIPs he wants to dress—why not? Kate Middleton, Victoria Beckham, actress Rooney Mara, DJ Diplo and Russian designer Ulyana Sergeenko (“She challenges me”) are just some of the names on Alzaté’s list.

“I hope to someday, soon, be a great inspiration for many young designers,” he says.