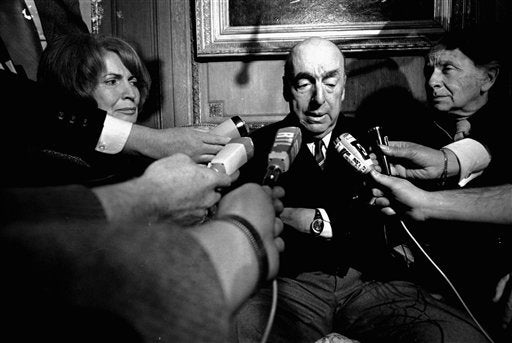 This Oct. 21, 1971 file photo shows Pablo Neruda, poet and then Chilean ambassador to France, talking with reporters in Paris after being named the 1971 Nobel Prize for Literature. Forensic experts say no traces of chemical agents have been found in Neruda's bone remains. AP

SANTIAGO, Chile — The four-decade mystery of whether Chilean Nobel Prize-winning poet Pablo Neruda was poisoned was seemingly cleared up on Friday, when forensic test results showed no chemical agents in his bones. But his family and driver were not satisfied and said they’ll request more tests.

Neruda died under suspicious circumstances in the chaos that followed Chile’s 1973 military coup. The official version is that the poet died of cancer. But Neruda’s driver and aide has said for years that dictatorship agents injected poison into the poet’s stomach while he was bedridden at the Santa Maria clinic in Santiago. His body was exhumed in April to determine the cause of his death.

“No relevant chemical substances have been found that could be linked to Mr. Neruda’s death,” Patricio Bustos, the head of Chile’s medical legal service said as he read the test results of the seven-month investigation by the 15-member forensic team.

Bustos said experts found traces of medicine used to treat cancer in Neruda’s remains but that there’s no forensic evidence to prove that Neruda died from anything else other than a natural cause.

“The Neruda case doesn’t close today,” said Chilean Communist Party lawyer Eduardo Contreras. “Today we’re going to request more samples. They referred to chemical agents but there are no studies about biological agents. A very important chapter has closed and was done very seriously but this is not over.”

Neruda, who won the Nobel prize for literature in 1971, was best known for his love poems. But he was also a leftist politician and diplomat and close friend of socialist President Salvador Allende, who committed suicide rather than surrender to troops during the Sept. 11, 1973, bloody coup led by Gen. Augusto Pinochet.

Neruda, who at the time was 69 and suffered from prostate cancer, was traumatized by the coup and the persecution and killing of his friends. He planned to go into exile, where he would have been an influential voice against the dictatorship.

But a day before he planned to leave, he was taken by ambulance to the Santa Maria clinic, where he was being treated for cancer and other ailments. Officially, Neruda died there on Sept. 23 from natural causes. But suspicions that the dictatorship had a hand in the death have lingered long after Chile returned to a democracy in 1990.

“We’re not satisfied with this but it’s an objective result and there’s still a way to go,” said Rodolfo Reyes, one of Neruda’s nephews. “A deeper investigation is needed.”

Chile’s Neruda bone remains to be analyzed in US