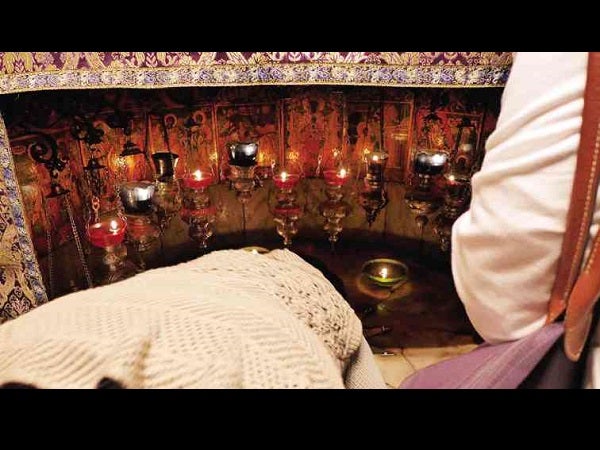 Reliving the first Christmas in the Holy Land

The greatest story ever told comes alive with a trip to the Holy Land itself.

This Christmas season, performing artist couple Robert Seña and Isay Alvarez and their children, along with other pilgrims, will visit Israel and parts of Syria, Palestine, Jordan and other ancient holy sites identified with the birth, ministry, suffering, death and resurrection of Jesus Christ.

Traveling with the Journeys of Faith entourage, Seña and Alvarez will also perform at a free concert, dubbed “Songs for the Christmas Child of Bethlehem,” on Dec. 23 at Manger Square in the Church of the Nativity in Bethlehem where, the Bible says, Jesus was born.

Among the holy sites that the Journeys of Faith group will visit are:

Basilica of the Annunciation; Cana; and Nazareth

The Basilica marks the spot where the Virgin Mary is believed to have accepted God’s will for her to give birth to Jesus. The walls of the Basilica have representations of Mary contributed by several countries, including a pearl-encrusted image from Japan.

Seña and Alvarez recently celebrated their wedding anniversary in Cana—where Jesus is said to have performed his first miracle during a wedding feast.

Church of the Beatitudes; Galilee; and Church of Peter’s Primacy

The Church is located in the traditional site of Jesus’ delivery of the Sermon on the Mount, otherwise known as the Beatitudes. Seña says he plans to do some soul-searching here “about our life, work and other special intentions.”

The journey includes a boat ride to the Sea of Galilee, the largest freshwater lake in Israel which, the Bible’s New Testament says, many of the miracles of Jesus occurred within its shores—including his walking on water, calming the storm, and feeding five thousand people.

The Church of Peter’s Primacy is where Jesus prepared breakfast for the Apostles after his resurrection.

This Church in Haifa, Israel, commemorates the place where Elijah the Prophet defended God against those espousing false idol worship. The oratory is dedicated to the Virgin Mary as Our Lady, Star of the Sea (Latin for Stella Maris).

Its ceiling has colorful motifs from the Old and New Testaments with Latin inscriptions of Biblical verses around the roofed dome. There will be a side trip to the Bahia gardens and the Aqueduct at Caesarea Maritima.

This is one of the high points of the pilgrimage, where the Christmas spirit is felt strongest as one awaits his/her turn to kiss the spot where Jesus was born.

The Church of the Angels commemorates the place where angels announced the birth of Jesus to shepherds in the fields outside Bethlehem.

From here the pilgrims make their way up the more than 100 steps for Mass at the Church of the Visitation in Ein Karem, Israel—where Mary is said to have recited her song of praise, the “Magnificat.”

This will be highlighted by the free concert in Manger Square.

Church of the Holy Sepulchre; Church of All Nations

After the festive mood, the pilgrimage takes on a somber atmosphere in Jeruslaem with the Via Dolorosa—the path where Jesus walked, carrying his Cross, on the way to his crucifixion—from the Church of Condemnation to Golgotha at the Basilica of the Holy Sepulchre.

This is followed by a trip to Dominus Flevit where Jesus wept on his way to Calvary. Pilgrims insert their arms into a hole where the Cross stood; and kiss the stone where Jesus’ body was laid and anointed with oil.

Next is a veneration of the bedrock at the Garden of Gethsemane inside the Church of All Nations in Jerusalem, and a Mass at Ecce Homo Church, traditionally the location of Jesus’ trial by Pontius Pilate.

Church of the Peter Gallicantu; The Upper Room; Church of Dormition

The Church of the Peter Gallicantu commemorates Peter the Apostle’s rejection of Jesus thrice (Gallicantu is Latin for “cock’s crow”).

The Upper Room, also known as the Cenacle, is said to be the site of the Last Supper where Jesus shared a meal with the Apostles the night before he died. During this meal He also instituted the Eucharist.

It is likewise in the Upper Room where tradition marks the coming of the Holy Spirit, and is recognized as marking the birth of the Christian Church.

The Church of Dormition (or Mary’s Assumption) is where Mary was supposed to have been assumed into heaven.

From mountain to mountain, and from church to church, Christmas at the Holy Land is a real life-changing experience for the faithful. The free concert featuring Seña and Alvarez will also be a prayer of thanksgiving and healing.

There is still a chance to join this pilgrimage.