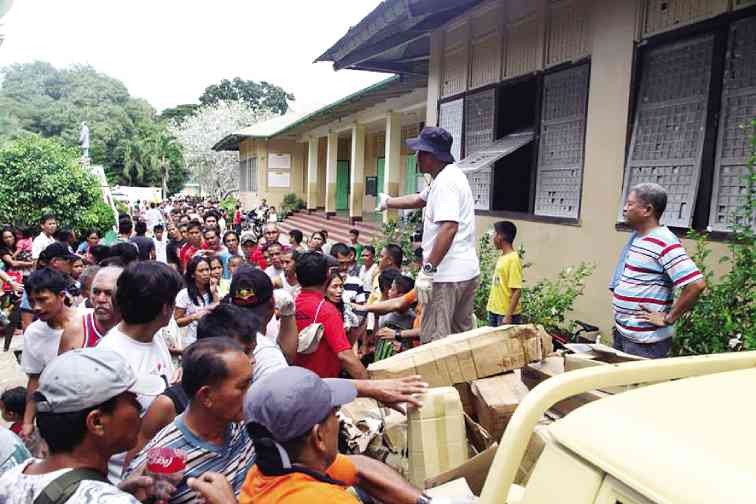 ‘In a gentle way, you can shake the world,” Mahatma Gandhi once said. When a 7.2-magnitude earthquake shook Bohol and, to a thankfully much lesser degree, Cebu, last Oct. 15, several individuals as well as private and nongovernment organizations in the Queen City of the South proved Gandhi’s words true. They responded to the violent tremors with a gentle yet successful push to mobilize relief efforts for devastated Bohol—in effect making a difference, or “shaking the world,” as the venerable one would say.

Here, we’ve decided to cite individuals and organizations who, while the rest of us were still trying to regain our balance, were already thinking on their feet. We recognize that there are many heroes in this story, and regrettably, we cannot mention them all, but in many ways, that’s the beauty of it.

A mere few hours after the earthquake hit, The Islands Group, spearheaded by CEO Jay Aldeguer, initiated a movement called #BangonSugBohol (Rise Up, SugBohol), a portmanteau of Sugbo (Cebu) and Bohol popularized by former Cebu Gov. Lito Osmeña and resurrected for this relevant purpose by The Islands Group. With almost lightning speed, it caught on.

Jay Aldeguer recognizes the power of symbolism, and that’s what he gave Cebu. He unified this island by giving it a common battle cry, words to rally behind, and an idea to pin its hopes on.

Quick on its feet

Beyond the symbolism, though, The Islands Group was also quick on its feet. All of its stores and hotels (Islands Souvenirs, Islands Pasalubong and Islands Stay Hotel) served as drop-off points for relief goods, like food, water and medicine.

And to ensure that these goods ended up where they should, it wisely decided to partner with Gawad Kalinga for the distribution of goods through its Operation: Walang Iwanan.

Those interested to donate in cash may do so through the Gawad Kalinga Community Development Foundation Inc., BPI Account No. 9081-0019-41; Swift Code: BOPIPHM.

Days after the earthquake, it was hard to walk around Cebu without coming across anyone dressed in a #BangonSugBohol T-shirt, a new line of shirts released by Islands Souvenirs. By wearing the shirts, not only were you helping the earthquake victims who were the beneficiaries of part of the shirt’s proceeds, but also serving as a gentle walking reminder for those who have yet to do their part.

‘We Will Rise Again’

Speaking of doing their part, one couple who can be consistently relied on to do just that are Cebu Chamber of Commerce and Industry’s Wilson and Melanie Ng, who birthed the brilliant idea of staging a benefit concert for the earthquake victims in Bohol.

Conceptualized and executed in only three days, the “We Will Rise Again” concert, still a part of the #BangonSugBohol movement, was held at Ayala Center Cebu on Oct. 20.

With the participation of over 500 local musicians, there was no shortage of performances for the benefit concert, which ran from 2 p.m. until midnight, and there was no lack of public support either, with over P1.2 million raised in cash and pledges.

With a successful showing like that, the only sensible thing to do was to do the whole thing all over again. The second time around, on Oct. 26, “We Will Rise Again” was held at The Northwing, SM City Cebu, with the participation of universities and student associations led by the University of Cebu’s chancellor Candice Gotianuy and Lotlot Neri.

According to Melanie Ng, the participation of the artists was so overwhelming that not all of them were able to perform in the concert, which ran from 3 p.m. to 9 p.m. and raised more than P1.5 million in cash donations.

The University of Cebu

After having spearheaded the sequel to “We Will Rise Again,” Gotianuy and Neri could have called it a day, but no, they were hard at work even after the concert—and before that, too.

Immediately after the earthquake, UC set up a drop-off center on their Banilad campus. The initial plan was just to collect relief goods for the earthquake victims, but after several requests from out-of-town friends who wanted to make cash donations, they opened a separate account for this purpose. They went over and beyond what was expected by providing absolute transparency, keeping tab of all donations and posting them on the University of Cebu’s and SunStar Cebu’s websites for all to see.

To date, they have been able to raise over P500,000 in cash or check donations, all of which have been converted to essential relief goods. For cash donations, please send to BDO Ayala (Cebu City) Branch; account name: University of Cebu; Peso Account No. 2420075958. E-mail your deposit slip or details to [email protected] so that your donation may be properly acknowledged.

In true Bayanihan fashion, UC has enlisted the help of various organizations. It offered one of its campuses to DSWD Manila for storage and repacking of relief goods, thus serving two simultaneous relief operations.

UC worked closely with the Metro Cebu Uptown Jaycees and their Bohol counterparts not only to help in the distribution, but also to identify which towns were in most need.

One of our favorite stories of UC’s collective heroism is when their team delivered relief goods on foot to Barangay Sohoton, Calape. This is situated between two mountains and was so remote that it was impassable even for two-wheeled vehicles.

With no available chopper, UC’s team, headed by the relentless Ernest Evanglista, found a two-kilometer motor trail through the municipality of San Isidro, gathered eight motorcycles, and delivered the relief goods to 179 households in Sohoton and adjacent barangays.

Equally moving are the smaller gestures witnessed by the University of Cebu. One gave a truckload of noodles, while some gave what they could—P3, a can of food, a bottle of water. Heroes were everywhere indeed.

With a thrust to provide relief to calamity victims in remote areas that cannot be reached easily by rescue teams, Amro’s founder, esteemed Cebuano neurosurgeon Dr. Wyben Briones, led a team of over 100 volunteer doctors and nurses in providing medical aid and relief goods to the towns of Tubigon and Maribojoc.

That trip made them realize the greater need for help, so they returned the following weekend with 70 medical professionals, to the towns of Carmen, Sagbayan and Danao.

Their four-wheel-drive vehicles allowed them to reach isolated barangays after the earthquake damaged roads and bridges. We heard that in one such place, a group of children they had helped expressed their gratitude by suddenly bursting into song, giving the volunteers more fulfillment than they could have asked for.

Gilt Artisan Lounge’s Jay Chiongbian, Lani Pasquet and April Rama prove that they are there not just for the good times, but also for the uncertain ones.

Knowing that most relief efforts are already going toward basic necessities, they decided to focus on medical missions.

They also coordinated with a team of doctors from Malaysia and St. Luke’s Hospital, the Elite Malaysian Rescue Team, Manila Paramedic Team, Philippine Mine Safety and Environment Association, the Angel Brigade and the Land Rover Club of the Philippines, as well as volunteers, to mobilize three medical missions. Cheers to their efforts!

In under 48 hours, Qube Gallery’s Jon Kenneth Gotiong and Maris Holopainen put together Art for Bohol under the #BangonSugBohol movement, a benefit exhibit with Jay Aldeguer’s Islands Souvenirs, Gawad Kalinga and StreetKonect, a nonprofit art, design and street culture organization.

The outpouring of support from the local community of artists was overwhelming, and in one day, they received over 100 pieces of art ranging in price from P200 to P20,000, from such distinguished painters as Dennis “Sio” Montera, Kimsoy Yap Jr. and Javy Villacin.

Hive, a design house founded by Kenneth Cobonpue, pitched in with three metal house sculpture prototypes, which will be part of their Village collection.

Fashion accessories designer Neil Felipp San Pedro contributed brass skull cocktail rings and a cuff, while Venezuelan photographer Jose Antonio Nigro, who has called Cebu home for the last six months, supported the cause with a beautiful black-and-white photograph of a Venice canal.

Maia Villarica-Franco, an avid art collector, joined the cause and gave two paintings by Cebuanos Manuel Pañares and Gabriel Abellana from her personal collection.

Artists from StreetKonect, including graffiti artist Kidlat of The Junks Collective, customized #BangonSugBohol T-shirts on the spot.

The tremendous group effort last Oct. 25 raised over P200,000, all of which went straight to Gawad Kalinga.

According to husband and wife duo Toby and Yvonne Florendo, who are both with Gawad Kalinga-Cebu, through the combination of the proceeds from Art for Bohol and all their other fundraising endeavors, GK has already delivered over 20,000 relief packs and 70,000 liters of water to over 108 barangays from 14 municipalities as of Oct. 27.

Relief operations are ongoing but are slowly giving way to the much more daunting task of rebuilding.

In our book, these individuals and organizations are heroes that deserve more than a pat on the back—they ought to have all the help they can get. To again borrow some words from someone more eloquent than us, this time Henry David Thoreau: “One is not born into the world to do everything, but to do something.”