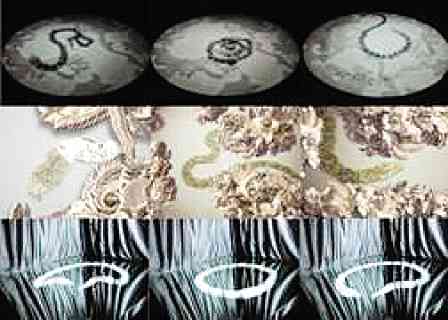 Pinto Gallery in Antipolo is showcasing the varying art forms of the Vinluan family of artists, Nov. 17-Dec. 3.

With the exhibit “Pieces from Heaven and Earth,” painter Nestor Olarte Vinluan continues to create works of quiet spirituality.

As an artist possessing a childlike fascination with the natural world—the texture of a stone, the veins of a leaf, the blue washes of the sky—Vinluan distills his observations of nature on the canvas, a craft he has mastered in his 40-year career.

He says control is imperative in a creative process teeming with chance-drips, splatters and dots, likening it to “drips on an unknown space; this makes one’s universe complete.”

A 1972 Bachelor in Fine Arts graduate from University of the Philippines, Vinluan earned his master’s degree from the Pratt Institute in Brooklyn, New York, on a Fulbright Hays Scholarship in 1980.

He received the Cultural Center of the Philippines’ Thirteen Artists award in 1974, for the “new, visual thinking” manifested in his body of work.

Art historian Rod Paras-Perez describes his work as “strangely mesmerizing.” Critic Leo Benesa calls him “an artist who had uncompromisingly committed himself to high abstraction.”

He was dean of the University of the Philippines College of Fine Arts, a position he held from 1989 to 1998.

Lyn Romualdez Vinluan’s “Woven Seas” consists of tapestries in varying sizes, in jewel tones and rich hues. The title was derived from the place that inspired these tapestries, the Bingag beaches of Bohol.

Lyn studied weaving in New York, an art she had learned during her stay in the city while accompanying her children and husband, who was then studying at the Pratt Institute.

Using a wooden loom (which still stands in the family home), she worked on her pieces during vacant hours while raising their two children.

To be screened is siblings Paulo and Liv Vinluan’s animated short “Ambrosia Temporale.”

Paulo was a former Play-doh champion in the defunct 1990s television show “Uncle Bob’s Lucky 7 Club.” Liv has a fondness for plastic animals. Together they make animated shorts that examine death, using animals and fruits as metaphors.

Their claymation short “Fruit of the Doom” follows the short life, decay and rebirth of a fruit. They are now working on their next film, involving skeletons and hybrid animals.