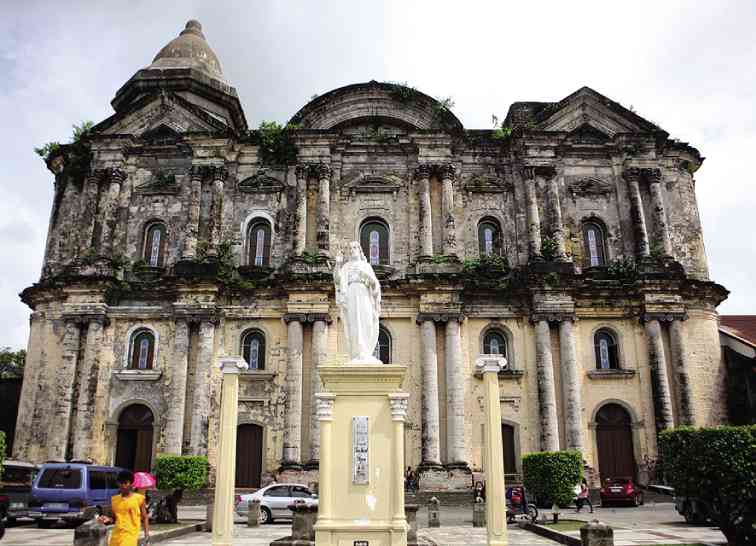 TAAL, BATANGAS—Three weeks after the National Historical Commission of the Philippines (NCHP) requested Msgr. Fred Madlangbayan to stop the construction of a building beside Taal Basilica, workers are still busy finishing the structure’s washroom.

The foreman, who identified himself only as Ramil, said that Madlangbayan—parish priest of the church formally known as Basilica San Martin de Tours—instructed the 24 workers to focus on the washroom so parishioners could use it by next month.

Ramil added that Madlangbayan also wanted to rush the completion of eight commercial stalls at the side of the new building facing G. Marella St. at the soonest possible time.

Asked what the stalls were for, Ramil shrugged his shoulders and said in Filipino: “For selling food like burgers. That’s what I heard.”

Madlangbayan has been assailed by disgruntled Taal residents for insisting on the construction of the building, to be called the Jubilee Hall, which he reportedly intends to use as  venue for social events like weddings and baptisms.

Trouble is, Taal Basilica was declared a National Heritage Site under Ferdinand Marcos’ Presidential Decree 375. This means it is a protected monument and cannot be renovated, improved or be subject to similar efforts without the express consent of the NHCP.

Ramil said he had heard about the complaint aired by the group led by sculptor Ramon Orlina against the ongoing construction of the Jubilee Hall, and the so-called “ruins” beside it that was recently completed.

Orlina pointed out in an Inquirer interview last month that the new structures were not in keeping with the basilica’s Augustinian architecture, and were actually eyesores “with no historical basis.”

Ramil said he and his men would rather heed Madlangbayan’s orders to proceed: “Only the rains can stop us from going on. We are aware of the controversy, but only Monsi [Madlangbayan] can tell us to stop.  And until he does, we will continue.”

In a letter dated Oct. 16, NHCP chair Maria Sereno Diokno had asked Madlangbayan to cease all activity in the construction site. The request was made after Orlina alerted the commission of the allegedly clandestine projects around the basilica.

Diokno also told Madlangbayan that the NHCP would sponsor a dialogue where the priest and his supporters could thresh out their differences with Taal residents who were against the project.

The meeting was set last Nov. 4 but did not push through. Orlina said Madlangbayan asked that the meeting be rescheduled.

“I’m worried because a new date has not been set at all.  Meanwhile, the construction is ongoing. I think it was a ploy by Madlangbayan to delay the meeting so he can still continue building the Jubilee Hall despite the NHCP’s request for him to stop,” Orlina told Inquirer Lifestyle in a phone interview.

NHCP’s Diokno sent word through her staff that she would give a statement about the Taal Basilica controversy once the dialogue between Madlangbayan and Orlina has taken place.

Orlina, whose parents hailed from Taal, is at the forefront of efforts to preserve the architecture of the basilica, famed as the largest Catholic church in Asia.

The sculptor had already locked horns with one of Madlangbayan’s predecessors, the late Bishop José Salazar, who insisted on building an Adoration Chapel in the middle of the church’s courtyard nearly 10 years ago.

In 2004, Orlina and  other members of the Taal Church Historical Authentic Restoration Movement (CHARM) took Salazar to court for violating PD 375.

After a protracted court battle that reached the Supreme Court, the case was finally declared a violation of the provisions for a heritage site; the Adoration Chapel was ordered removed from the basilica’s premises.

But it remains in the courtyard.

Orlina noted that, despite the legal precedent set by the case filed against Salazar, he found it “ironic that a similar controversy plagues the same church now.”

In an earlier Inquirer interview, Orlina already asserted that, apart from violating the heritage-site provisions, Madlangbayan also violated the Building Code since the construction began despite the lack of a building permit issued by the local government concerned.

Efforts by Inquirer Lifestyle to get Madlangbayan’s side were all for naught. “Ignore mo na lang” was his curt reply via text message, when asked about the postponed meeting that would have pitted him against Orlina in a formal venue.

Orlina also complained that, apart from being illegal, the Jubilee Hall’s location would also adversely affect the ventilation inside the church.

Orlina, a licensed architect, said regulations required a 5-meter space between two structures. “If you look at the distance between the old church and the Jubilee Hall, it’s only about 1.5 m,” he huffed.

Not so, Ramil countered. The foreman stressed that he personally measured the distance.  “There is a 3.4-m space between the two structures,” he said.

Inquirer Lifestyle informed Madlangbayan of a plan to revisit Taal Basilica last Nov. 5. The priest sent a text message saying he would be in Nasugbu, Batangas, for an appointment.

When this reporter paid a second visit to the site, both the external and internal walls already had a cement finish (palitada).  The floor, with an approximate area of 16 x 12 m, was being smoothened.

Ramil said the Jubilee Hall would have a utility room where materials for food catering like china, silver, tablecloths and the like could be stored.

“That, too, is now in the process of completion. And the windows are next to be given a cement finish,” the foreman noted.

“Trabaho lang,” he added, with another shrug.