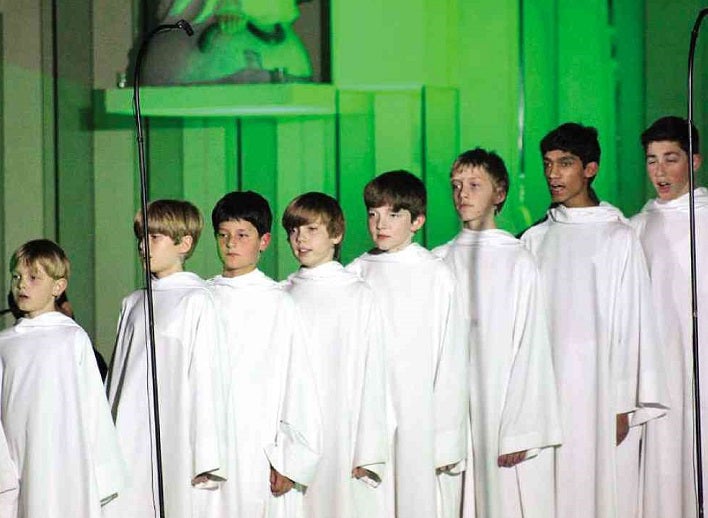 When Libera arrived in Cebu for a one-night concert at the Chapel of San Pedro Calungsod in SM Seaside Complex, South Road Properties, the first order of the day was a meet and greet at SM City Cebu. It was well-attended.

Visiting the country for the fourth time and having come from a successful show at PICC in Manila, the British vocal group enjoys a growing and enthusiastic fan base among Filipinos. Quite a feat considering this is not your typical boy band.

“The songs of Libera do not bring you to your feet to do a primal dance,” said Dr. Roberto de Ocampo, former Finance secretary and chair of the British Alumni Association, in his remarks before the boys’ performance. “Rather, they uplift your soul.”

Indeed, the South London-based group, composed of 24 boys, between the ages of 8 and 14, did just that when they won over a packed audience with an 18-song repertoire (and three encores).

The show was part of the festivities of this year’s Philippine-UK Friendship Week.

The Cebuanos couldn’t but note the timeliness of the choir’s visit.

Trying to recover from the deaths and devastation caused by the magnitude 7.2 earthquake that rocked Central Visayas, particularly Bohol and Cebu, the people were looking for calm and reassurance wherever they could get it.

Dressed in white, flowing monk’s robes (some oversized  sleeves fell past the hands of the littlest members) and sporting a variety of haircuts—from the tousled bedhead reminiscent of One Direction’s Harry Styles to the sideswept ’do a la Justin Bieber—Libera made the crowd smile as they filed in quietly on an elevated stage.

Onstage was a handful of musicians from the Manila Symphony Orchestra.

Libera broke into song, the rousing Latin Catholic hymn “Dies Irae.” Those hearing the choir for the first time were in awe at how such vocal purity could come so effortlessly from the boys.

“Angelic” and “celestial,” words often used to describe the choir’s vocal style, are apt indeed. Their singing could bring you to tears.

A versatile song selection, from traditional church music and Christmas carols to Irish singer Enya’s “Orinoco Flow,” kept the audience in rapt attention. They dedicated the latter number to Cebu, much to the delight of the audience.

They stood in clusters, in “V” formation, the image lit dramatically by Luke Avery.

Most endearing, however, was when the boys addressed the crowd every two numbers to narrate charming anecdotes.

They have traveled to the US, Europe, Japan, Singapore, South Korea, Taiwan. They go on tour only when they’re free from school and never without “Moose,” their small stuffed choir mascot.

The DVD format of their recently released holiday album, “Angel Voices: Christmas in Ireland,” was recorded in the summer, prompting a production crew to source towering Christmas trees in the middle of August. Samples of their vocal warm-ups and exercises drew admiring cheers.

Learning tunes from the countries they perform in also keeps “Asia’s Best Loved Boys’ Choir” relevant and loved by fans the world over.

First sung in Taiwan, the Chinese hit “Moon Represents My Heart” was also part of Libera’s Manila and Cebu repertoire.

At the Cebu show, the concert’s finale drew a standing ovation. It was a moving rendition of “Bayan Ko.”

Whether you’re watching Libera for the first—or fourth—time, you’re sure to be a fan.