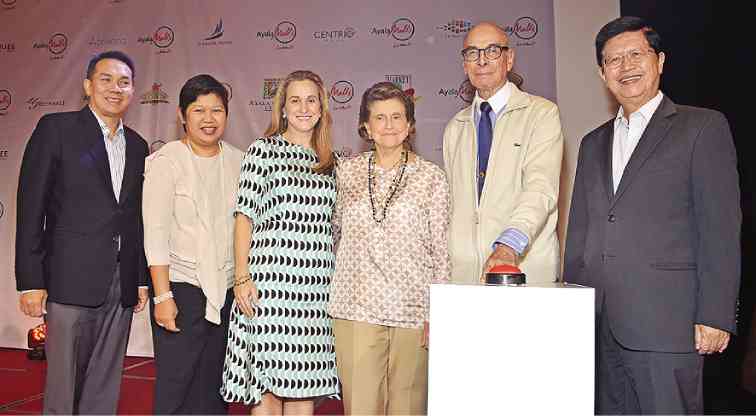 It was a sober moment at the Raffles Ballroom of the Raffles Suites Makati as Ayala Land dedicated a minute of silence for the victims and families left behind by Supertyphoon “Yolanda.” In an event that was supposed to highlight the joys and revelry of the Christmas season, Ayala Land reminded everyone about the spirit of sharing and giving.

“Today is a mixture of joy and sadness. The resiliency of the Filipino is almost wondrous, but for those of us who have seen pictures caused by Yolanda… it makes us very, very sad,” said Jaime Zobel de Ayala, artist and chairman emeritus of Ayala Corp.

Zobel said that, despite the trying times, he hopes everyone can still find a moment of peace and joy this Christmas.

“The Joy of Sharing,” the Christmas theme that celebrates Ayala Land’s 25 years and Ayala Center’s 50th, as in previous celebrations, will consist of performances by the country’s favorite heartthrobs and artists.

This time, however, mall-goers will also be encouraged to donate; donation boxes will be placed in all Ayala Malls.

“Every Christmas, Ayala has always been conscious about giving back or doing something for other people,” said Sofia Zobel Elizalde, director and founder of Steps Dance Project which is scheduled to perform “Pepe’s Secret Christmas” at Ayala Malls nationwide.

Elizalde, who was shocked at the catastrophic aftermath of Yolanda, said her sister, Bea Zobel Jr., was still devastated by the earthquake that struck Bohol when Yolanda came barreling through the Visayas region. Zobel Jr. had undertaken restoration projects in the province for many years before the 7.2-magnitude earthquake hit on Oct. 15.

“But when you’re up against nature, what can you do?” said Elizalde.

Ayala will be focusing on the rehabilitation component of a group of islands in Iloilo, close to where Yolanda made its fifth landfall in Concepcion, said Ayala Land president and CEO Antonio T. Aquino. That means doing the basic cleanup, providing temporary shelter, relocating and finding permanent homes, and helping the locals regain their livelihood.

It’s a long-term commitment Ayala is more than willing to invest in.

“From a business standpoint, what should really happen is that the Manila businesses should continue to invest in the Visayas. If you start to talk about major rehabilitation, that is the best way. We have to see to it that we continue aggressively in our investments in those areas, notwithstanding all these calamities,” Aquino said.

In the Visayas, Ayala is present in Cebu, Bacolod and Iloilo City. Aquino said they chose the rehabilitation component in an obscure town down south from Tacloban because the government and the private sectors are already focused on Tacloban, the city most ravaged by Yolanda.

In areas no longer deemed habitable, such as coastal areas, Aquino said Ayala will help the displaced population look for a new location and build permanent homes for the families. These will be made possible in cooperation with LGUs, NGOs and Habitat for Humanity.

Back on their feet

“In our own small way we want to help put them back on their feet. You will see a lot of events, like concerts, become a venue for fundraising. The concierge booths will have donation boxes, and proceeds of shopping bags will go to rehabilitation projects and help victims,” he said.

The “Stars of Joy” concert series will feature dance and music performances directed by Audie Gemora, with musical directed by Mel Villena. This will be held on Nov. 19, 6:30 p.m., at the Glorietta Activity Center, with Piolo Pascual, Martin Nievera, Kuh Ledesma, Joanna Ampil and Steps dancers.

“Pepe’s Secret Christmas,” written by Floy Quintos, is a Christmas celebration of the Filipino seen through the eyes of a young man and talking, dancing animals. It will have performances on Nov. 23, Harbor Point, Subic;  Nov. 30, Centrio Mall, Cagayan de Oro; Dec. 7, Abreeza Mall, Davao; and Dec. 14, Marquee Mall, Pampanga.

Jaime Zobel de Ayala’s “Tunnel of Joy,” images of Christmas through the lens of an artist, will be a panoramic spectacle at the tunnel of Greenbelt. A photo competition and booth inspired by Zobel’s exhibit called “A Thousand Encounters” will be open to all Glorietta Christmas shoppers on Nov. 14-17. Categories are Solo Creative Photo; Couple Creative Photo; and Group Creative Photo. Solo category will receive P25,000 worth of shopping spree at Ayala Malls; the couple winner will get an overnight stay with breakfast at Raffles Suites; and the group winner will be treated to a buffet for 10 at Holiday Inn restaurant.

An exhibition of photographs of ceiling paintings of Bohol’s colonial churches will also be showcased Nov. 11-14 at the Fashion Walk of Greenbelt 5.

“We are committed to make sure we are able to help out in communities that are badly affected. All the activities in the mall will be for fundraising to help the victims,” said Ayala Land chief operating officer Bobby Dy.