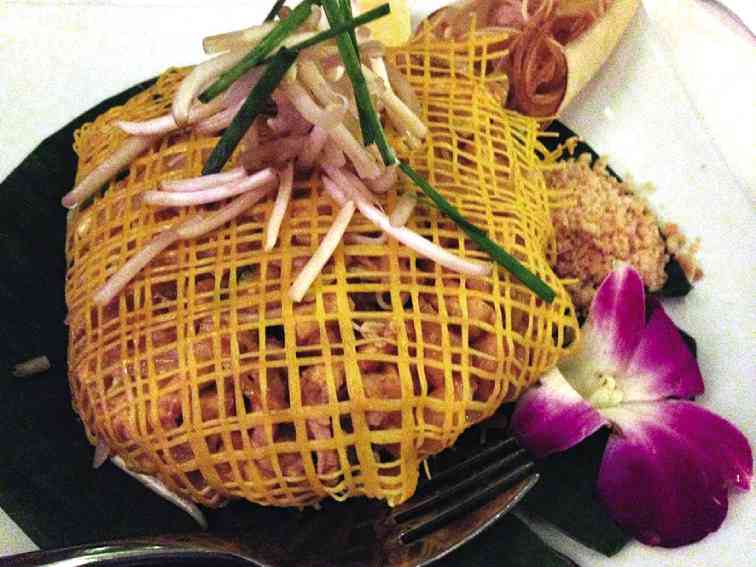 Rice, sardines, corned beef, instant coffee and clean water are what should be on everyone’s mind right now, as well as how to get them to the people most in need. The weekend news cycle had been kind to the typhoon survivors because the circus at the Senate had taken a break, and footage from the Visayas was just beginning to trickle in.

Public consciousness tends to wane as the workweek sets in and Manila-based politics dominates the news once again. But the need for rice, water and other basic foods will not have waned by today, nor next Thursday, nor the week after that.

The food community is fractious, with lots of bickering and gossiping at the back of the walk-in chiller. But vanity and ego give way to mutual respect and cooperation when something cuts as deeply as the recent tragedy does.

A number of chefs have been organizing fundraiser dinners and I urge people to try to go, or to start one of your own if you know how to cook and have friends willing to contribute something in return for a meal.

There are many ways of giving, but I feel food is particularly appropriate because it’s an offering and something done in commensality. The fraternity of chefs, food writers and researchers is, for the most part, not a wealthy one, but we do have wealthy patrons. And we owe so much to the Visayas—it has given us many great talents and a culinary heritage and ingredients to draw from.

(See details at the end.)

In conversations and on social media, there is an existential cry for meaning as people try to make sense of what just happened. Because surely, everything happens for a reason.

The storm was God’s punishment for bacchanalia and excess and homosexuality. It was a man-made weapon being tested by the Americans. It was caused by pollution and disregard for the environment.

There is a restaurant at the corner of 31st Street and 4th Avenue in Bonifacio Global City which, for no reason, is completely empty when it shouldn’t be. Either that, or we have reached the point at which there are more restaurants than people who go to them.

It’s fairly new, just on its fourth week. At this point the buzz should be at its height, and it should be full and buzzing.

If a restaurant is serving only seven people at a crucial point in its infancy, when every impression it makes is important,  it will pass all too quickly into the slow death of half-price drinks and live music sets.

I was expecting a truly terrible meal when we arrived on the weekend, when every table seen through the tall windows was empty. Perhaps others knew something about Silk Road that I

Why are there long queues in other, terribly mediocre restaurants, while good ones like this get the silent treatment? In a just world this wouldn’t happen, but we live in a terribly unjust world.

Thus we ended up being the only table in the restaurant and were served, treat after delectable treat, in the uncomfortable silence—outnumbered by staff, anxiously scrutinized through the kitchen peepholes.

Silk Road doesn’t cook “authentic,” which usually means “traditional,” Thai cuisine. The food here is unabashedly modernized and localized (the purists would say bastardized), but I like it very much.

Think of it not as Thai food, but as a whole lot of delicious and interesting concoctions with a vaguely Southeast Asian peninsular accent.

We ordered the mieng kham, which is street food rather than an appetizer, but works very nicely as one, stuffed in demitasse cups. As one does after buying it from a street vendor, wrap the leaf (cha phlu) around the shallots and toasted coconut and pop the parcel into the mouth.

Other versions use the more easily sourced alagaw leaves (Premna odorata as opposed to Piper sarmentosum), which are just as delicious but not quite the same.

What was written on the menu as Thai ravioli turned out to be lumpia with steamed rice flour wrapper. This was not at all bad, as was the Pad Thai.

There was nothing particularly Thai or even distinctly Asian about the soft-shell crabs, but they were excellent—little morsels of flavor and crunch that flaked like  turon  in the mouth.

The roast duck curry was one of the few less than stellar productions of the evening. We thought they had given us the lamb curry by mistake, but it turned out to be very, very coarse duck.

The other was the “silk nest,” ostensibly coconut ice cream in a taro basket; that was not taro but sweet potato and was chewy and woody, like an actual nest would be, rather than crunchy.

I also feel that the ice cream was either poorly made or had been allowed to melt and then refrozen, unless the crumbly texture of sorbet was what the chef wanted.

In any other restaurant I would nitpick about the flavors of each dish, all set at maximum, and ask for modulation. But I’d rather that the chef err on the side of more flavor rather than too little.

As it is, the meal consisted of myriad little explosions of goodness. The restaurant misleads and does itself an injustice by calling itself a Thai restaurant. What we had was a well above-average, non-authentic, non-Thai meal.

Let’s just call it good things to eat, and an establishment well worth trying out.

Ginny de Guzman and Allen Buhay of Wildflour will host a dinner at Gustare on Nov. 17. Call tel. 4030345 for details and reservations.