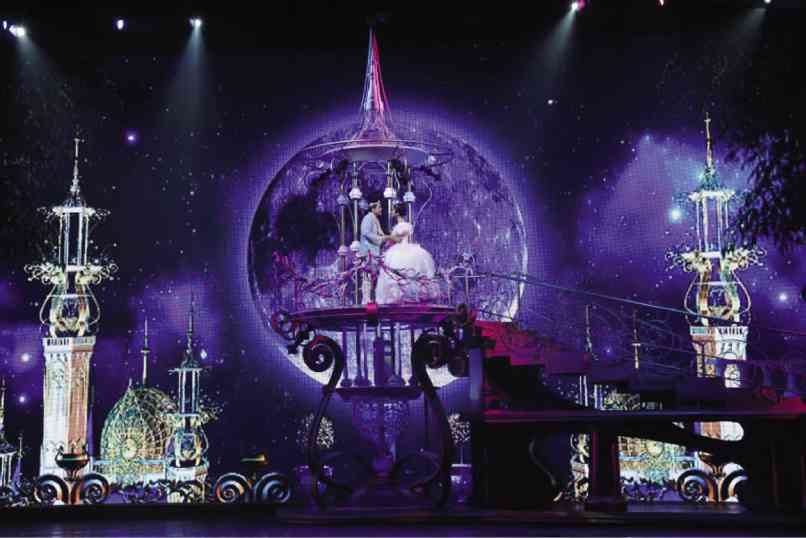 Mortal and reachable, but still a magical ‘Cinderella’

“Rodgers and Hammerstein’s Cinderella, 2” which opened Oct. 10 for a three-month run at the cavernous Newport Performing Arts Theater in Resorts World Manila is not exactly how people would picture a musical based on a children’s fairy tale.

(That’s how the show is properly billed, by the way, to distinguish it from the 1950 Disney animated film that’s arguably the most recognizable version of the centuries-old fairy tale for current generations.)

More than 50 years of Disney movies have taught us that fairy tales thrive in fantastical extravagance, in the omnipresence of magic and elements far removed from reality. In “Cinderella’s” case, extravagance is in the form of transformation—a ragged dress becoming an exquisite ball gown, or a pumpkin morphing into a royal carriage, as the Disney version so efficiently immortalized onscreen.

That’s not to say that Resorts World’s “Cinderella” lacks any of the requisite sparkle and glitter; it has ’em aplenty, actually. One need only consider how the insanely creative trinity of Andrew Botha, Aksana Sidarava and lighting designer John Batalla has made this production look like it’s just finished bathing in the swankiest hues of the color wheel.

Botha lays the foundation with his gargantuan sets—mainly, a staircase and two rotating pieces that are on one side, facades in a town square, and on the other, the interiors of a house. But his flair for design is most evident in the details—in the curves, curls and twirls that dominate the sets to give off that fancy, first-class feel. He also employs the theater’s LED screen to project sweeping backgrounds that virtually deepen and extend the stage.

Sidarava’s costumes are just as opulent, from the pumped-up gowns and humongous wigs to the elaborately dressed lowly villagers, their seeming sartorial individuality a product of intricate mix-and-match. And the technique involved in the pivotal transformation of Cinderella’s tattered clothes to a glamorous gown succeeds in providing a thrillingly marvelous five seconds (no spoilers here).

Such opulence also extends to Rodel Colmenar’s musical direction. Under his baton, the Manila Philharmonic Orchestra has brought to lush and succulent life the melodious, if not particularly striking score by Richard Rodgers.

This “Cinderella,” then, is quite the overachiever as far as the technical aspects go. But that’s about the tangible magic coursing through this production.

Thank goodness, director Michael Williams drew the line there. After all, how many times must audiences be told this tale as old as time itself to be convinced that “Cinderella” can wave its wand and cast a spell as good as any?

The book by Oscar Hammerstein II generally bears the same plot as the Disney film. There is the titular orphan girl and her abusive stepfamily, the fairy godmother, the carriage and the gown, the ball at the palace, the glass slipper, the happily ever after. Put in the musical numbers, the pomp and grandeur, and the show is set to go.

But under Williams’ watch, this “Cinderella” is as compact as possible. Moving the story forward takes precedence; all other concerns—the theatrics, the songs, the dance numbers (choreography by James Laforteza)—must bend to the story.

That, without sacrificing nuance and artistry. For instance, the scene where the Prince searches for the foot that fits the slipper is now an amusing pantomime featuring the ladies of the kingdom and the steward Lionel (Red Concepcion, hilariously scene-stealing all throughout).

The more potent magic of “Cinderella,” however, is the result of how Williams steered his cast to attack their characters. This production’s refreshing appeal stems from the full-blooded characterizations; for such a grandiose fairy tale, the characters are surprisingly earthbound, “un-magical,” real.

Thus, we have the likes of Menchu Lauchengco-Yulo’s fairy godmother, a motherly figure whose parenting style is anchored on tough love. (Though, it must be said, Lauchengco-Yulo looks more like the queen of the sea in her cape of purple scallop shell, and her talents are atrociously underused in this three-scene role).

Cinderella’s stepfamily, too, has undergone a personality makeover. Pinky Marquez (who plays the fairy godmother in certain performances) becomes a stepmother who is not an all-out evil hag, but rather, a jealous and desperate woman long past her prime (Sweet Plantado-Tiongson alternates in the role).

The same sentiment can be extended to the stepsisters. As portrayed by Gianina Ocampo and Maronne Cruz, they are no longer just spoiled brats; they have become pathetic, unsophisticated girls who are actually more pitiful than despicable. And their duet, “Stepsisters’ Lament,” is no longer comedy; it is now a confession of envy by way of song.

Even the royals have not been spared the overhaul. Miguel Faustmann and Sheila Francisco are utterly convincing in portraying the monarchy as just another bickering couple with mundane problems. Francisco’s Queen, in particular, is that mother whose desire to see her son find a wife compels her to do outrageous things like dreaming up a kingdom-wide ball behind his back.

But above all, this “Cinderella” owes much of its success to its leads—Julia Abueva in the title role and Fred Lo as the Prince. (Pop artists Karylle Tatlonghari and Christian Bautista receive top billing for those parts.)

Abueva, all of 17 years old, is simply enchanting. Her Cinderella is the embodiment of youth’s fragile innocence, a meek and obedient creature (in homage to the Chinese version of the tale) at once brimming with dreams and crushed hopes.

In the mold of former Cinderellas such as Julie Andrews and Lea Salonga, Abueva, too, sings most beautifully, delivering her songs with precise diction and emotional clarity that further underscore the promise of a luminous future onstage.

In fact, this production’s most magical moment, should there be only one, belongs to Abueva: Early in Act I, under the shadow of the colossal sets, she sings “In My Own Little Corner” and weaves a pristine union of poetry and melody, the imagery of the song—Norwegian princess, milkmaid, heiress, huntress on safari—brought to vibrant life.

Meanwhile, Lo initially plays his role as a reluctant heir to the throne, a boy-prince hungry for adventure and life beyond the castle. But it is his visible transformation from boy to prince that is most remarkable.

Together, Abueva and Lo also make this “Cinderella” an inadvertent tale of young love. Truth is, they fit so well into their roles, work so well as a pair, and are totally convincing as a couple, that it’s hard to imagine how, say, Abueva paired with Bautista would have worked out.

“Cinderella,” by the way, is Resorts World’s third consecutive Rodgers and Hammerstein musical. But the material itself isn’t exactly considered one of prodigious duo’s finest. What this production has achieved is a triumph well beyond script and sheet music. It’s the magic of the fairy tale made mortal and reachable.

In a world where “impossible things are happening every day,” the characters are very much flesh and blood, and so they make it easier for the audience to suspend disbelief. It’s not how fairy tales usually work; most are too engrossed in their own fancies to even be involving.

This “Cinderella” tries to break the mold, and the results are ravishing.