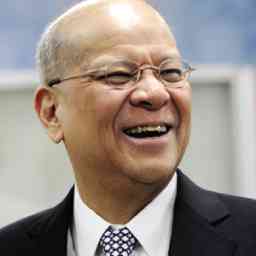 It’s common knowledge by now that Ramon Ang, top honcho of both San Miguel Corporation and Philippine Airlines, got his start by working as an auto mechanic, fixing cars that he then sold for a profit.

A 2011 Bloomberg profile of him said Ang was repairing Japanese auto engines at age 13, and selling them for a 150-percent markup.

Ang is proud of his beginnings. “It was difficult work,” he said in a 2011 interview with the Inquirer. “But business was good and the money was clean.”

His love for fixing machines was such that not only did he take up Mechanical Engineering (at Far Eastern University), he also began collecting cars. Now he is said to own about 100—one of Asia’s best collections, pronounced Bloomberg.

What not many people know is that Ang’s love for metal and machine extends to planes. He is a licensed pilot who flies his own aircraft. His takeover of Philippine Airlines (PAL) in 2012 seems, therefore, one of those life moves preordained by destiny: the former mechanic once again getting all greasy and grimy to fix an ailing airline, pilot it and make it fly once more.

Under his watch, PAL has expanded aggressively, acquiring a new fleet of aircraft and reopening routes to Toronto and London, with Amsterdam, Paris, Rome and Frankfurt up next on the timetable.

Ang likes to rattle off the innovations the airline has pursued: WiFi onboard, gourmet cuisine, a better flying environment afforded by newer and more wide-bodied aircraft, and the convenience of nonstop flying to select destinations.

He feels strongly about such things, because “I do enjoy traveling,” he says. “My favorite place to go is Japan—Tokyo, Hokkaido, such places. The people are very friendly, and it has the best food, the best weather. And very near Manila. Pare, apat na oras lang, nandun ka na.”

The “pare” is not an affectation. Ang is as well-known for his sense of informality. He calls long-time business journalists who cover him “pare,” slaps them on the back, peppers his remarks with colloquialisms.

Asked about a much-hyped business development, he disarms with a folksy metaphor: “Kwentong kutsero lamang yan!”

“In Europe, the best place to visit is really London. Tapos pag nandito ka na, sumakay ka lang ng train from London to Paris, less than three hours ’yun. And when you’re there, you’re already at the center. When you’re in Frankfurt, you’re even closer to more places. So I think, kung mamamasyal ka, that’s the order of priority.”

The young, however, should aim higher and be more adventurous, says Ang.

With a spokesperson like that, PAL and the business of flying seem in good hands.