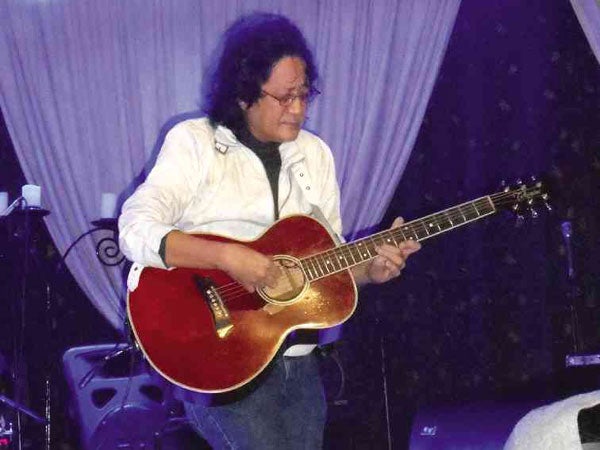 Noli Aurillo is overcome with pain and anxiety. The musician has not heard from his mother, sister and other relatives who live in Tacloban.

“If I screw up tonight, I guess I can be forgiven,” he says before playing his acoustic guitar.

It’s a windy Wednesday night at 19 East club in Sucat, Parañaque, where a full-house audience has turned up to watch Aurillo, the Flippin’ Soul Stompers, Jonan Aguilar, Ebe Dancel, Imago, Pedicab, Sandwich, Kjwan and Stick Figgas in a benefit show for Supertyphoon “Yolanda” victims in the Visayas.

The gig, organized by music website Radio Republic, is one of the first fundraising efforts of the local music community in response to the disaster.

The mood at 19 East is upbeat, the crowd enjoying the short sets (two songs each) of the featured bands. The tunes that Flippin’ Soul Stompers frontman Bing Austria sings, “What’s Going On” and Pick Up the Pieces,” are appropriate, even as he opens with “Dancing in the Streets.”

In any case, nobody wants to get depressed here tonight, and music, whether happy or sad, is what we need in these trying times.

Laughter punctuates Aurillo’s first number as singer Jay Ortega flubs the first line in “Tao” with the wrong key. But this is not a classical recital and, as Aurillo demonstrates in his instrumental piece, there is room for mistake this evening.

He plays desolate-sounding notes which later give way to jarring moments, his fingers hitting the strings harder and harder till all torturous thoughts of death and misery are exorcised.

Ebe Dancel sings his bittersweet ballads, followed by noisy sets from Pedicab, Sandwich, Kjwan and Stick Figgas. The loudness of the music is not really an assault to the ears—19 East has one of the best acoustics among all clubs in Metro Manila because its owner, Wowee Posadas, is a musician himself.

Posadas is also here tonight, relaxing with a drink, happy with the thought that he’s doing his share of extending help.

More benefit gigs, all for the Visayas, are set in the next weeks:

The Roadhouse Rocks for Relief features 69 Proof, Black World Gypsies, Bleu Rascals, The Blue Rats, The Brat Pack, The Deputies, Dr. Crowley, Electric Sala, Ian Lofamia Band, Khumpas, King Pineda Band, among others, on Nov. 24 at The Roadhouse Manila Bay, SM Mall of Asia complex, Pasay City. There will be an auction of collectors’ items such as signed boxing gloves from Manny Pacquiao and “The Boss” Yamaha Dragstar 1100 Motorcycle. All proceeds go to relief efforts in the Visayas.

The [email protected] (1951 M. Adriatico, Manila) is donating 100 percent of sales every Thursday, Friday and Saturday this November to musicians affected by Typhoon Yolanda.

British singer-songwriter Paul Simpson of The Wild Swans has posted this message on his website: “To help raise much-needed emergency funds for The British Red Cross Typhoon ‘Yolanda’ appeal, the long-deleted Wild Swans five-track live mini-album ‘For One Stormy Night Only’ is once more available to download. It will be deleted on Dec. 1. All the money from this release will go to the Red Cross appeal.”

As we write this, plans are afoot for a big benefit concert for the Visayas, tentatively set February 2014 at Smart Araneta Coliseum. It is being organized by the people behind ’70s Bistro in Quezon City and the massive “Bistro sa Amoranto: Tugtugan Pamorningan” marathon concert held at Amoranto Stadium more than 20 years ago.

The lineup of performers is still being finalized, and the possibility of inviting Bruno Mars, The Black Eyes Peas, Journey and other international acts with members having Filipino lineage to join the gig is being seriously considered.