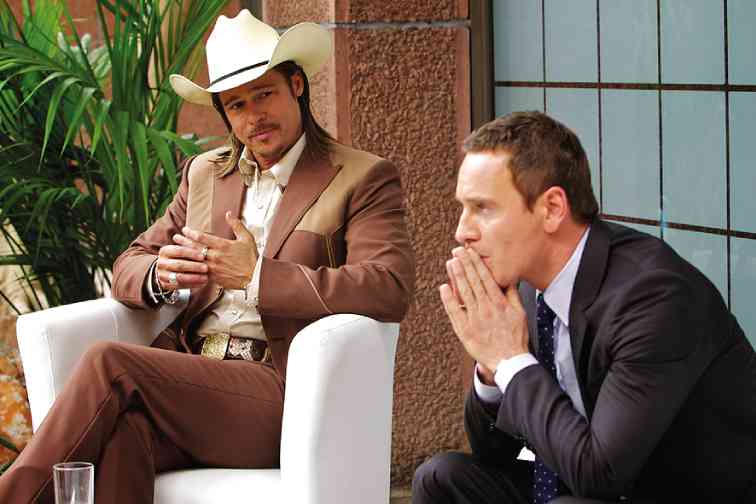 BRAD Pitt and Michael Fassbender star in “The Counselor”

Pulitzer Prize winner Cormac McCarthy, whose novels have been adapted into film, has, for the first time, written an original script directly for the big screen.

A contemporary thriller, “The Counselor” is about an American lawyer who, tempted by the lure of quick money, finds himself involved in the dizzying business of drug dealing with the ruthless Mexican cartels. Soon enough everything spirals out of its course.

The film is directed by Ridley Scott, who is known for classic sci-fi films as “Alien” and “Blade Runner.”

Michael Fassbender plays the counselor, whose name is never revealed throughout the film. He is joined by an all-star cast led by Penelope Cruz, who plays the counselor’s beautiful girlfriend Laura; Javier Bardem as drug dealer Reiner; Brad Pitt as Westray, a middleman in the drug dealing; and Cameron Diaz as the exotic and dangerous Malkina.

Fassbender says of the script: “The writing is so exquisite and sophisticated and you just don’t get that opportunity very often. This is one script where you just don’t know what is going to happen next and how these characters are going to progress or regress.”

Scott has recently directed the smash hit, “Prometheus,” which is the fifth of the “Alien” franchise. Scott, who is a big fan of the novelist, thought directing “The Counselor” would be the “perfect project” to follow it.

“[‘The Counselor’] is a great script; it’s savage and rude,” Scott says. “I met Cormac in Albuquerque four and a half months before we started shooting and he just said, ‘So, do you want to do it?’ And we shook on it.”

McCarthy is one of the executive producers of the film.

Fassbender describes his character as an ordinary man who, probably unaware of his actions, gets himself in the point of no return.

“There’s an arrogance to him, which is going to be costly,” he says. “I wanted him to be an everyday guy. I wanted him to be you or me, but who has over-pitched himself. He’s taken a risk without fully taking on board what the consequences of that risk could be, and he subsequently finds himself way out of his depth.”

Greed was what led the protagonist into the drug dealing business in the first place, something he thought would only be a one-time thing. He was wrong.

“For me, [the counselor] has overreached himself and he needs to pay some money off and that’s why he has decided to go for this one-time deal,” Fassbender says. “Of course, as we all know, if you enter that world there is no such thing; it can’t simply be a ‘one time deal.’ And it sets off a chain of events.”

Although “The Counselor” is McCarthy’s first feature film screenplay, he has already written for TV. He wrote “The Gardener’s Son,” a two-hour episode of the TV series “Visions,” which was broadcast on PBS in 1977. Three of his novels, “All The Pretty Horses” (2000), “No Country For Old Men” (2007), and “The Road” (2009), have been adapted for cinema.

Rated R-18 and strictly for adults only, “The Counselor” is showing in cinemas nationwide.