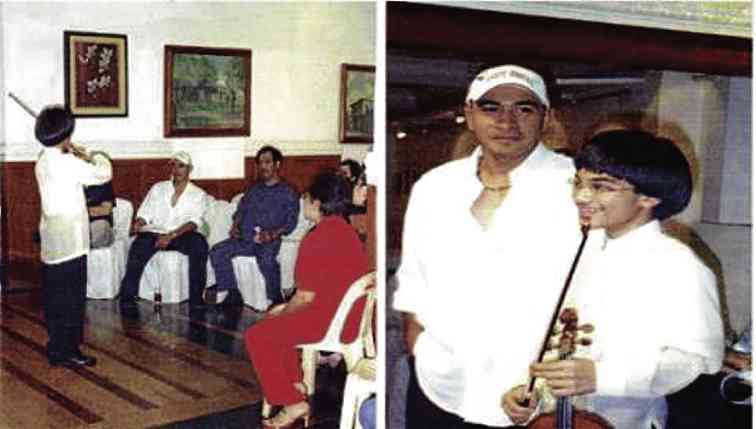 A YOUNGER Chino Gutierrez playing for the late filmmaker Marilou Diaz-Abaya; with actor Cesar Montano at the Pasig Museum.

He was only 7 when he took his first violin lesson, and two years later placed second in the National Music Competition for Young Artists.

At 10, he bagged the First Prize and made his orchestral debut at the Cultural Center of the Philippines with Lalo’s Symphonie Espagnole. His performance was such that Germany-based Filipino conductor Oscar Yatco blurted: “That boy is the Cecile Licad of the violin!”

Joaquin Maria Gutierrez was easily accepted at Munich’s prestigious State Academy of Music and Theater, where pedagogue Jens Ellermann instantly classified him as “a major talent.”

Chino—as the young violinist is known to friends—is now into his early 20s. He will appear in a special recital with pianist Corazon Kabayao on November 30 at the BDO Francisco Santiago Hall.

He feels dismayed that the country went through another calamity when it hasn’t recovered yet  from a killer-earthquake. “The issue here is not preparing for the storm,” he says. “‘Yolanda’ was larger and more powerful than any typhoon we’ve ever encountered, and so there was little we could have done to prevent the damage. Rather, it’s how quickly we pick up the pieces right after.”

The violinist is also aware that the country is located in the typhoon belt and in the Pacific Ring of Fire.

“I think we have learned to eat typhoons and earthquakes for breakfast,” he says. “Why are we still being caught flat-footed at times like these?  Why is it that somebody like Anderson Cooper, who flies in five days after the event, finds that nothing is still in place? I think it’s time that we, as a nation, should start specializing in disaster management. Instead of being victims all the time, let’s be more proactive and find a way to deal with all the givens in our equation.”

He cites the case of The Netherlands which has found an excellent way to cope with flooding from the sea. Or Japan which deals with tsunamis and earthquakes rapidly and efficiently.

He has gone through some personal storms himself.

While some of the country’s legislators are feasting on billions in pork barrel, Chino has to take a leave from his Munich studies for lack of financial resources. He admits to being depressed initially.

“You know how it feels when you’re so full of dreams and plans, when everything inside you has fallen into place and you’re ready to forge full-steam ahead, but something you can’t control holds you back? Nevertheless, I’m trying to be pretty cool about it, though it’s not easy.
“The time factor weighs heavily on my mind. I’ve been on leave for three semesters now, and, as I understand, I need to return to the academy by March or I will be de-registered for good. If I don’t make it by then, I’ll have to start from the beginning all over again. Also, I’m trying to get ready to join competitions and festivals, and it’s much easier to do it from there.”

He is taking things in stride and believes there must be a reason for all this trial.

“For one thing, I see it as a chance to enrich other facets of myself that I may have unwittingly neglected because of my violin. Now that I’m back home, it’s also a chance to re-bond with my family and achieve wholeness that way, spend precious time with them, and celebrate birthdays, Christmas, New Year, and help take care of my grandma—things I can’t do when I’m in Munich.”

Chino believes he has come of age, and so has his playing. “I’d like to think that my playing now is more nuanced and complex compared to what it was 10-13 years ago. I’ve been through a variety of experiences, and gone on the roller-coaster of life. I’ve also experienced how it feels to fight for my music when it looks like my violin career would have to end. All these things have impacted my playing deeply, in contrast to the time when I was young and everything was smooth-sailing and comfortable.”

His Nov. 30 concert is a fundraising event for his interrupted Munich studies.

For now, he reveals a major change in his approach to music. “I now have a wider perspective, and thus I focus on different things than before. For example, the process of conveying emotions more readily to my audience. As a child, I focused more on technique and correctness, whereas now I try to play so that, aside from being technically superior, the music comes alive. I experienced having a member of the audience suddenly standing up in the middle of my ‘Tzigane,’ as he could not contain what the music was making him feel, and that was especially gratifying for me because I knew my music had hit its mark.”

“Of course, I am a work in progress,” he added. “My playing, which has evolved from what it was when I was 10, still has a long way to go.”

The consummate artist that he is, he found an ally in the person of violin icon Gilopez Kabayao with whom he had long coaching sessions in Iloilo.

It was another learning experience. “Due to his full and lengthy career, Mr. Kabayao has a tremendous wealth of experience with which to approach different types of music. His comments and insights on the pieces have been invaluable. He is a very generous and supportive mentor who does not hold back on anything—even in terms of work hours. Also, he has been instrumental in preparing me mentally and emotionally for my concert. I will always be grateful to him for all that he has done—as a teacher-coach and as a person.”

What followed was a chamber-music experience with pianist Corazon Pineda Kabayao. “She was very familiar with the violin repertoire, having played with Mr. Kabayao for most of her life. So there wasn’t much adjusting to do in that department. She is also a superb sight-reader, in cases where she’s unfamiliar with the piece. I find her to be a very generous artist who lends excellent support to whoever she is playing with at a particular time. We have very good rapport, and approach many of the pieces from the same perspective.”

The Nov. 30 program consists of Ysaye’s Sonata No. 2; Cesar Franck Sonata in A Major; and “Tzigane” by Ravel.

He will try to achieve a few things  beyond getting his notes right. “I always try to tell a story to the audience—to make the music interesting and relevant and an immersive experience for everyone. Since music is the most fleeting of the arts, if I manage to play such that something lingers on in my audience—perhaps a strain of music inside their head; a sense of well-being; or a feeling that all is right with the world—then I’d consider my performance a success.”

Gilopez Kabayao’s verdict on Chino: “I can say with conviction that Chino is one of our most promising and exciting violinists who could be a big success on the international concert scene. A prodigy who could play difficult works at 7 or 8, and hailed as a young virtuoso at 16, he amazed me with his musical maturity, technical security, the mastery of his instrument, and the passion to learn and perform the great works of the masters.”