Nonoy Froilan, the King of Dance, dances up a storm as Scrooge | Inquirer Lifestyle ❮ ❯ 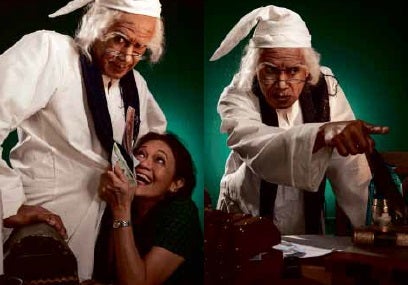 ON PLAYING Scrooge: “He resonates with audiences because he mirrors so many of the things they experience during this time of the year—so a great deal of the impact made by the character lies on the acting involved.”

Nonoy Froilan, the King of Dance, dances up a storm as Scrooge

Prince Albrecht in “Giselle”; Basilio in “Don Quixote”; Franz in “Coppelia”; Prince Siegfried in “Swan Lake”; and the Young Man in “Songs of a Wayfarer”—name it, this superb Filipino dancer has played the male lead opposite some of the world’s most brilliant ballerinas in almost every popular production imaginable.

And now, 20 years after his retirement in 1993, Nonoy Froilan, the country’s only premier danseur, finally returns to immortalize yet another memorable character as he plays Scrooge in Ballet Philippines’ staging of Charles Dickens’ “A Christmas Carol.”

Making it an even sweeter comeback is the fact that his wife, Edna Vida, is the production’s choreographer.

“Edna was the one who encouraged me to return on stage,” admits Froilan, adding that he was hesitant about it at first, as he wanted to devote all his time to his primary work, directing videos for Froilan Video Arts.

“But then again, I also need a break from all that,” he concedes. “I consider this a major highlight of my journey as a performer, although in a different way, as when I was performing opposite Yoko Morishita and starring in every major production of Ballet Philippines.”

It goes without saying that one of the things he is looking forward to in this production is working with his wife.

“Edna based her choreography of Scrooge on how I specifically move, and I can openly tell her my opinion. Developing the choreography with her is a great and enjoyable experience, because Edna works in a very light and playful manner, much like that of a child exploring new things. Her process is really very interesting,” he reveals.

At the same time, there’s the challenge of dancing hip-hop—a technique Edna and her team of choreographers have creatively integrated into the show.

“I’m going to be an old man attempting to do hip-hop!” he quips. “Don’t expect fireworks, but I’m hoping that puts more life into the role.”

Taking on the character of a cold-hearted, greedy man who despises Christmas with a passion, Froilan considers playing Scrooge more an acting than a dancing challenge.

“Scrooge resonates with audiences because he mirrors so many of the things they experience during this time of the year—so a great deal of the impact made by the character lies on the acting involved,” he points out.

Bearing in mind the overall theme of the story, Froilan reflects on its specific message to the Filipino audience.

“‘A Christmas Carol’ is all about giving and sharing, even what little we have. We’ll all be able to relate to this because there’s a Scrooge in all of us,” he muses. “But being Filipinos, our generous and hospitable nature can override this tendency, just because we love to give.”

He concludes: “This is one dance performance that doesn’t just make for good entertainment. ‘A Christmas Carol’ will cause us to examine ourselves and reflect on our actions. Are we harboring a Scrooge-like heart? How can we balance giving and not being taken advantage of? This story poses so many great questions for us to think about as the holiday season approaches.”