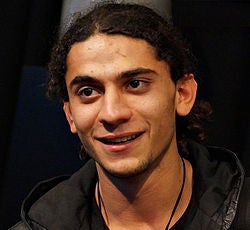 COPENHAGEN, Denmark — Danish police say a man has been arrested for assaulting a teenage poet of Palestinian descent whose poetry is critical of Muslims.

Spokesman Ove Bundgaard Larsen says 18-year-old Yahya Hassan was slightly injured in the head when he was attacked from behind at Copenhagen’s central train station on Monday evening.

In his poems, Hassan criticizes what he claims is a culture of hypocrisy underpinning Denmark’s Muslim population. He has also pinpointed his Palestinian immigrant parents and their generation as the reason why he quit school and committed petty crimes.

His book of poetry has sold more than 17,000 copies since its publication on Oct. 17.

Since then Hassan has received death threats and has been placed under police protection when attending public readings.