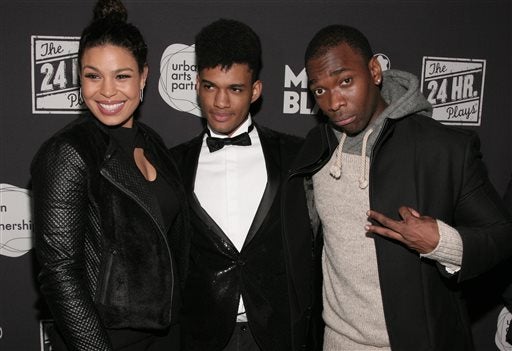 NEW YORK — The stars were out in force on Broadway on Monday — and they were frantic.

The coffee-fueled benefit performance of “The 24 Hour Plays” was held at the American Airlines Theatre, an annual event in which more than two dozen actors — this time including Jesse Tyler Ferguson, James McAvoy, Jason Biggs and Zachary Levi — teamed up with six writers and six directors to write and rehearse a half-dozen plays over a single day. The event raised $500,000.

They were asked to audition with a prop and a costume, both of which often found their way into the final play. Frequently the actors wanted to show another side. Natalie Dormer asked not to play her usual seductress, and so was cast as an assassin. Another actor wanted to die onstage and a third suggested he might like to be a murderer. Four people oddly brought clown props.

There was a cramming-for-college-finals feel about the venue in the hours before the show, with actors busy tweaking their lines and bonding over catered food or lounging about. The fact that several were “Saturday Night Live” veterans — Dratch, Pharoah and Taran Killam — seemed to help their moods. “I have a knack for retention,” Killam said.

Although Lucas stunningly shaved his beard onstage, the evening belonged to Cross, a veteran of five previous shows. The comedian appeared in the last four plays uttering a single line: “Oh, come on. It’s just milk.” He explained that he didn’t have time to commit all day this year but managed to get lured onboard if he did just a walk-on.

“That’s what it is for me: meeting celebrities,” Cross deadpanned backstage. “I just don’t get the opportunity to meet and chitchat — just small talk. I don’t want to talk about anything substantive. Just small talk with celebrities is kind of my thing.”

The playwrights gathered at 10 p.m. Sunday and each wrote a 10-minute play by 7 a.m. Monday. The celebrity actors then were picked by the playwrights taking turns and rehearsed the work for the next 12 hours. At 8 p.m., the plays were performed for a live audience. With only a few hours to rehearse, some performances were a little ragged but ad-libbing and helpful co-stars aided the dialogue.

Most were comedies, including a psychotherapist session that ended up with nun chucks being waved about, and another in which three cats turned on their owner.

This is the event’s 13th year in New York and it has lately branched out to Los Angeles.

The one-night-only show benefits the Urban Arts Partnership, an organization that brings arts education into New York City classrooms. The play project is backed by German luxury pen maker Montblanc, which has helped fund the project for eight years, as well as the Montblanc Young Writers Program.

“It takes a lot of guts. You never know what’s going to happen,” said Jan Patrick Schmitz, Montblanc’s North America CEO. “I think the actors and playwrights realize that it’s such a creative and unique process. To be part of it is such a great experience. You see the great skills and camaraderie. At the end, the audience has a highly creative experience.”

Review: ‘Nikolai and the Others’ bittersweet drama