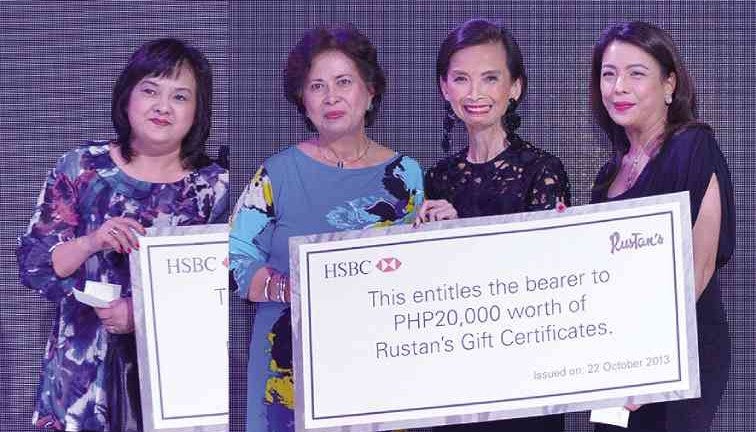 Fashion a valuable tool in raising funds for education

Cosmo Manille’s prominent personalities turned up to show their support for the project.

For her show, the Manila-born-and-bred Josefina Cruz-Natori explored the exotic theme of Chinoiserie in fabrics—a merging of Eastern and Western textures within a Chinese context. The glistening and opulent drama of red and black, blending with the richness of orange, blue, yellow and purple, made Natori’s creations a gorgeous sight to behold, palangga.

The funds raised from the show would go to the construction of additional classrooms in the Assumption school in Iloilo.

While the fashion show was in progress, some women were overheard saying, “I’ll buy that one and the other one…”

Après the crowd’s applause and expressions of gratitude to Natori and the organizers, a grand raffle draw was held. Three lucky ladies each won a Natori gift certificate worth P20,000.

Leading the A-list guests were Ambassador Jorge Domecq, Criselda Lontok and Katrina Ponce Enrile, among others. Spotted at the sidelines was designer Ian Giron of the Natori team. Buddha Bar was filled to the brim, proof that this fashion-for-a-cause event was a rousing success, palangga.

Speaking of Assumption, the still vivacious Marieliese Saldaña Evaristo couldn’t allow the 50th anniversary of her high school class from passing without gathering her batchmates for a post-“Velada” celebration at her home.

Everyone showed up, dahlings, all pumped up with energy as they danced to the hit songs of their teenage years.

Classmates like Assumption Sisters Amcie, Bernie and Stella flew in from the motherhouse in Paris to join the fun.

Marieliese served a divine spread of Thai, Vietnamese and Japanese cuisine, plus the must-have food of a Pinoy celebration, lechon.

“The years have taught us many lessons that have served us in good stead. Let us be grateful for friends who have remained steadfast, true and reassuring. If we’re still standing, we will celebrate far into the future,” chuckled Marieliese. Yes, gal, I’ll drink to that!

Needless to say, dahlings, the gals all had a blast way past their going-home time.

Leading fast-food chain Jollibee honored a new batch of outstanding Filipino families who have made a difference in the lives of others at the 3rd Jollibee Family Values Awards (JFVA).

From more than 1,500 nominations worldwide, hailed as this year’s most exemplary families were: the Rayo family of Sta. Ana, Manila, who champion children’s education; the Bernardo family of Camarines Norte, who advocate the rights of people with disability; the Supanga family of Camarines Sur, whose projects benefit underprivileged kids and the environment; the Elio family of Antique, who bring the gift of healing to the poor and the sick; and the Lim family of Zamboanga City, whose advocacy brings loads of hope to impoverished children.

The Duque family of London was the first recipient of the Jollibee Coca-Cola Global Pinoy Family of the Year award, “for their remarkable commitment to help their fellow Filipinos overseas.”

A special citation went to the Carmona family, whose members are based in Spain, Bahrain and the US. This fab famillie works together to help their needy kababayan in their hometown, Oriental Mindoro.

The special citation came with a plaque of recognition plus P35,000 in cash, and Jollibee Padala vouchers worth P5,000.

Hats off to Jollibee and the awardees. May your tribe increase!