For babies and mothers who survived ‘Yolanda’ | Lifestyle.INQ ❮ ❯ 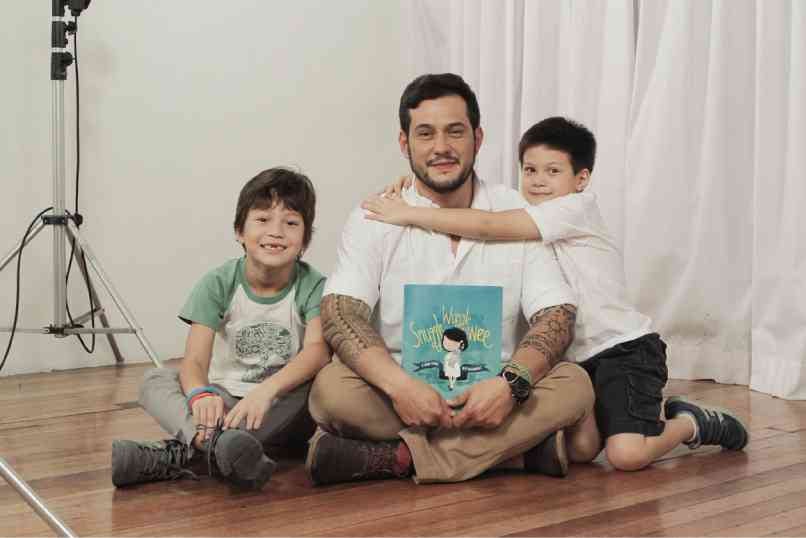 PACO Guerrero with Gael and Aiden

For babies and mothers who survived ‘Yolanda’

As an only child, I grew up very close to my cousins. I am part of the youngest batch, which means I have a number of ate and kuya to look up to.

I have all kinds of cousins, all of whom I love dearly. We have our eldest cousin, who is the most serious and watches over all of us—except when he gets a hold of a karaoke microphone.

There are the tres Marias I went to school with from elementary to high school, and therefore, are both barkada and family to me. Then, of course, there’s our cool Ate Buding, who, long before we were allowed to wear makeup and go out at night, asked our parents’ permission to take us with her and give me and the tres Marias mini-makeovers in her room.

When we were growing up, my cousin, Ate Buding Aquino- Dee, was always full of fun and exciting stories that we loved to listen to. As young girls, we lived vicariously through her stories. And today, as mother to Tommy, 13, and Colby, 6, and to Arie, 4, Buding is still telling those stories.

But now she has a much bigger audience as she launches the children’s story book, “Snuggle Wuggle Wee.” But I am getting ahead of myself!

Going back to our childhood years, not long after those makeover sessions, Buding married her longtime boyfriend, Dudu, in 1998. A year later, she had her first child, Tommy, while they were based in Vancouver, Canada. Just like any new mother, Buding “struggled with breastfeeding at the start.”

Fortunately, the state assigned a public health nurse and lactation consultant named Mercedes to help Buding get through the first few weeks.

“This was a life-altering experience for me, and her guidance and support planted a seed in my consciousness and a very strong desire to become a source of encouragement and enlightenment for others as well,” Buding tells me.

This desire led her to take a course and get certified as a lactation counselor and breastfeeding educator because she felt that “no mother should have to go through breastfeeding in the dark. Having a newborn is a momentous stage in a woman’s life, and it is crucial that she feels supported at this time.

“It is also in the baby’s best interest that he/she receives the greatest possible start in life in terms of nutrition and nurture, and that is why I choose to advocate breastfeeding.”

In 2005, Buding and her family moved back to Manila, where she immediately noticed the lack of support and opportunities for lactation education. “Sure, there were books and the Internet, but there wasn’t a peer support group that Filipino women could identify with,” Buding points out.

Two years later, in 2007, Buding, with like-minded friends, formed Latch (Lactation, Attachment, Training, Counseling, Help), an organization devoted to supporting breastfeeding Filipino women. It was launched with the purpose of “giving breastfeeding a fresh new face of empowered young mothers who were off to spread the wonderful gospel of breastfeeding through education and peer counseling.”

Today, Latch is a popular organization at the forefront of protecting, promoting and supporting breastfeeding through various projects.

One of its current ventures is the launch of the first Pinoy breastfeeding storybook, “Snuggle Wuggle Wee.” This is in line with Latch’s efforts to introduce the concept of breastfeeding not just to moms, but to the whole family as well.

“Snuggle Wuggle Wee” is a delightful tale of a young family as told by a little girl named Clara.

The story is simple enough to be grasped by young minds, but carries a profound message that will surely stay in their hearts long after they have grown up.

The book is a collaboration of Latch members Buding Aquino-Dee, Justine Tajonera and Jenny Ong.

“It took several months, a lot of crafting and a lot of determination to come out with the book. Part of the creative team is illustrator Bryan Delfin, who brought a lot of light and made poignant moments come to life in the book,” Buding says with excitement.

She explains: “Latch believes that breastfeeding isn’t just one of the to-dos on a new mom’s checklist. It is a whole culture that brings mothers closer to their babies and closer to other mothers as well. And what better place to start with culture than in childhood?

“The story of breastfeeding is a very old story, as old as humanity itself. But it has come to be taken for granted in an age when technology makes it possible for breastfeeding to be an option rather than the norm. This is why, in the story, the word ‘breastfeeding’ is not mentioned at all. The practice of breastfeeding is part of Clara’s family life. It is something that can only be articulated as love itself, ‘snuggle wuggle wee’ being a code in a close-knit family for that feeling of joy and warmth that comes with breastfeeding.”

“Snuggle Wuggle Wee” will be available at the Latch booth at the Global Pinoy Bazaar at the Rockwell Tent this weekend, Nov 23-24, from 10 a.m. to 10 p.m. The booth will be right across the registration area, and the book will be sold at P250. Part of the proceeds will go to funding projects that will help the mothers and babies who survived Supertyphoon “Yolanda.”

Under normal circumstances, Latch members are usually found conducting classes and giving training seminars to mothers and healthcare workers. But not many people know that when calamities strike, the members become even more active as they strive to help both mothers and children through infant feeding assessments, breastfeeding education, counseling and support, and breast milk collection drives.

As a response to Yolanda (international name: Haiyan), Latch is again working with breastfeeding advocacy groups and the Department of Health/Infant and Young Child Feeding Practices coordinators to set up Nanay Bayanihan, a day nursery at the Villamor Air Base that provides a safe and secure space for mothers with babies 0-2 years old.

This provides the refugees a place to rest, feed, change their babies, get some basic clothing, food and counseling as well.

Latch is also part of The Cold Chain Project, which aims to protect babies in the Philippines during calamities and natural disasters through the use of the principles of Infant and Young Child Feeding in Emergencies, as suggested by the IFE Core Group composed of leading organizations such as the World Health Organization, Unicef, UN High Commission for Refugees, World Food Program, International Baby Food Action Network, Care USA, Foundation Terre des hommes and the Emergency Nutrition Network.

There are many things that Latch does in times of emergencies, but “topping its to-do list was to provide a dedicated freezer, generator and the requisite fuel to the Eastern Visayas Regional Medical Center in Tacloban so that human milk can be made available to babies in the neonatal intensive care unit, and other infants requiring human milk.”

Hopefully, through your help and support, it can replicate this project in the surrounding provinces that were also affected by the typhoon.

Drop by the Latch booth and get your family’s own copy of “Snuggle Wuggle Wee” this weekend! Here’s what other parents have to say about the book:

Niña Corpuz, journalist, ABS-CBN: “I love the book! It’s about being close to each other and embracing change as well because there is a new member of the family. As a nursing mom myself, I could relate to the book because it spoke about the joy of breastfeeding, which is one of the best, most beautiful gifts in the world. It’s also great that the dad had a crucial role to play in the book, not just the mom.”

Cherie Mercado, broadcaster, TV5: “This is the first book I’ve read that explains breastfeeding in story form for children. This is a nice way of teaching them about what mothers go through. Reading it brought back memories when my babies were much smaller. I hope it makes mothers appreciate the breastfeeding process, even if it could be difficult.”

Paco Guerrero, photographer, host of “What I See”: “I love the book’s illustrations. I also appreciate that the lola is part of the story, so it shows that breastfeeding is a generational thing, and that it is something that’s been done for millennia and should continue and not be stigmatized.”

Issa Litton, actor, host: “What I like about it is that it brings siblings closer together, and it welcomes a new member of the family. This is something that you can read to your kids, whether you are expecting kids to come or not.”