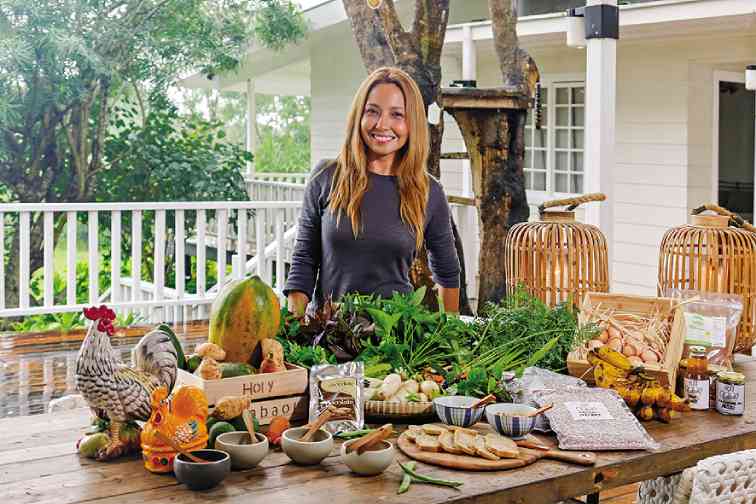 HINDY Tantoco with some of the farm’s produce that includes papayas, camote tops, turmeric and carrots

It’s hard to imagine Hindy Tantoco as a domestic goddess, one who tends to a vegetable patch and makes sure her children have healthier options; but that’s what she is now.

After giving up designing the Culte Femme and U brands for Rustan’s, she now spends most of her time with her family in their house in Sta. Elena in Canlubang, Laguna.

It was here where she first started growing bahay-kubo vegetables for her family. The term comes from the traditional Filipino folk song whose lyrics enumerate the vegetables that grow in profusion around a simple hut: “Singkamas (jicama) at talong (eggplant), sigarliyas (wing bean) at mani (peanuts), sitaw (stringbeans), bataw (hyacinth bean), patani (lima bean)…”

The types of vegetables she grows and the amount of land devoted to growing them has since expanded in the span of three years to include different lettuces, herbs, certain fruits and the very popular kale that she all sells under the farm’s name, Holy Carabao!

“The demand for kale has really grown in the past year alone. Before then, no one knew what kale was but now it’s one of our most popular products,” she said.

During our visit to her home one rainy morning, Tantoco talked expertly about beekeeping, foraging for edible weeds and preparing vermi compost or compost made with the aid of earthworms. This is a far cry from her past life as the lead designer of Rustan’s brands where her world revolved around sketches, fabrics and multiple deadlines.

When she and her family moved from Makati to Laguna three years ago, Tantoco decided to let go of the designing chores and focus on her growing brood. She and  husband Gippy now have four children—the eldest is 14 years old while the youngest is 10 months.

vegetables for my family, make my own honey. It started out as a necessity plus I got so bored while the kids were in school at the Acacia Waldorf,” Tantoco said.

She cautioned about buying honey during the rainy season because some sellers augment their meager supply with sugar.

“The bees don’t produce as much honey, so some sellers cook the honey with molasses,” she said.

Once, when they were blessed with an oversupply of vegetables, she went to her children’s school “like a palengkera with a bilao and told them, ‘Hey, buy naman from me, we have so much.’”

The small business grew from there. Tantoco would get a booth during the school’s Christmas fairs and then the mothers began asking for more premium crops like lettuces, tomatoes, carrots with their tops still intact and kale—items that were harder to find.

“We now deliver twice a week, Tuesdays and Thursdays, to places like Las Piñas and Makati and as far away as Antipolo,” she said. “We have a delivery charge that some clients say is too high, but then we tell then that if they had to go to a mall, then they would have to gas up, pay the parking fee, etc.”

From a frenetic lifestyle that used up most of her time and left her feeling burned out, Tantoco is now surrounded by calming green vistas everywhere she looks. She still designs bridal wear for clients who seek her out, but her family, their health and well-being are central to her life.

This Sunday, Nov. 24, she is overseeing the fourth Balik Bukid, a country fair of sorts to be held at Sta. Elena Golf & Country Estate from 8 a.m. to 8 p.m. 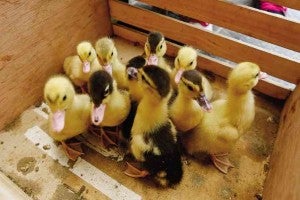 Entrance to the fair is free but all ticket sales for the paid activities will go to the Philippine Red Cross efforts for survivors of Supertyphoon “Yolanda.”

Aside from Holy Carabao! produce, bottled sauces like Tantoco’s Malunggay Pili Pesto, Tomato Feta Relish and Lacto-Fermented Carrot with Turmeric will be on sale at the bazaar.

Visitors can also stock up on organic, unpolished rice in vacuum-sealed packs, and a selection of cheeses from Davao City’s Malagos Farms.

Families are invited to attend with their kids as there will be live music, games, puppet shows, carabao and horseback riding, animal feeding, and kiddie yoga.

This is the fourth time in two years that Balik Bukid is being staged and despite its popularity—2,000 people reportedly attended the last one held earlier this year—Tantoco has no plans of holding it more often.

“I don’t want it to become like a weekly Salcedo market,” she said, referring to the one held in Makati during weekends. “It’s so hard to prepare, plus I want to keep the novelty so that people have something to look forward to.” Spoken like a woman whose priorities have changed for the