How theater transformed Angeli Bayani into the toast of Cannes | Lifestyle.INQ ❮ ❯ 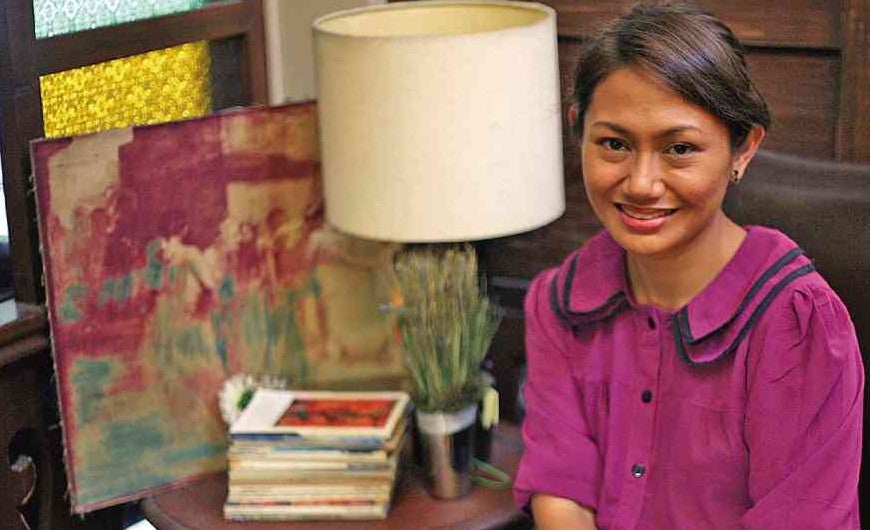 ANGELI Bayani: “The international [stints] resurrected my passion for storytelling. You fight to tell your story the best way that you can.”

How theater transformed Angeli Bayani into the toast of Cannes

At this year’s Cannes Film Festival where “Ilo Ilo” won the Camera d’Or Award, Agnes Varda, the renowned New Wave filmmaker who also happened to be one of the festival jurors, commended her performance. Then, in one of the festival’s last dinner celebrations, jury president and Danish director Thomas Vinterberg spotted her in the crowd and also congratulated her.

All that the flabbergasted Bayani could do was mumble her thanks endlessly. It was a phrase she could not quite stop repeating, especially to the critics and movie buffs who gave both films standing ovations.

“Iba na talaga ito,” Bayani recalls thinking. “It was an international audience… hindi siya biro. It was humbling; I could only say ‘Thank you for watching, for being there.’”

Bayani’s astonishment could probably have been equaled only by those of her colleagues in the theater—though not on account of her acting skills, but of her unassuming demeanor and humble response to all the accolades.

As Bayani now laughingly remembers, she was a tough nut to crack as a theater student at the University of the Philippines (UP) and as a member of the Actors’ Company in Tanghalang Pilipino (TP).

“I was a jerk when I was in college, and TP cured me of that,” she admits. And even then, that transformation took time and quite a lot of effort from her TP mentors, such as then artistic director Herbie Go and company dance instructor Fil Tariao.

“I wasn’t a generous actor,” Bayani adds. “I was just winging it.”

Before her indie rise, she was a successful working actor who was never idle, hopping from teleserye to film projects regularly, with the occasional post-TP stage performances in the Philippine Educational Theater Association and Gantimpala. But, in fact, acting was not part of the younger Bayani’s career plans when she started out.

Her initial plan was to pursue events management; her time as a production manager in Dulaang UP was part of the preparation. Money was mainly her motivation then, and art was not yet part of the picture.

“I am the eldest in the family,” she says. “My parents had expectations. Gusto ko sila maiahon sa kahirapan. A friend of mine was doing corporate events and needed extra hands.  Nakaka-raket ako. For a student, it was a lot [of money].”

Her first professional paycheck literally made her scream in joy and call her mother. There was a light at the end of the tunnel.

But it would turn out to be a spotlight in front of, and not behind, the audience. Maybe part of the reason is genetic: Her father is stage actor Nilo Bayani, a contemporary of Pen Medina and the late Rey Ventura in Rolando Tinio’s Teatro Pilipino.

Bayani discovered her latent gift when circumstances forced her to seek bona fide stage experience in order to finish her student credits in UP. After trying out courses in Biology and Music, she transferred to Theater Arts and found she had a knack for production and stage management.

But the transfer came too late and, per university rules, she was deemed overstaying. The only way she could earn her degree was to obtain actual theatrical credentials outside the university, which it would then credit as a prerequisite for her return.

A friend’s referral led to her audition in TP, which she thought was a mere process that would land her a paying stage management job. To her shock, she found out that she had been accepted as a scholar in the Actors’ Company.

While other acting wannabes would have given their right arm for the honor, Bayani was confronted with a dilemma: “Paano ako mabubuhay? [The allowance] was P50 a day. Doon nagsimula ang gutom ko. Hindi ko masabi sa nanay ko.”

After Go sat her down to a serious discussion, she stayed primarily to prove herself—and to work herself up to better roles.  Again, money was her motivation, and she took to heart the advice of the more senior members of the company who told her, “You have to be good in class, committed, involved.  Throw yourself into the role. As a scholar, you get paid only if you are cast in a role. In the event that you fail in the audition, the artistic director can volunteer you to become part of the chorus [where] you get a minimum honorarium.”

Thrown into serious drama, Bayani’s gifts emerged—along with her lack of enthusiasm for the craft. The first one to give her the needed “kick in the head” was Go: “You’re so ungrateful,” he told her.

Later on, their mutual friends told her the source of Go’s frustrations: “He could never be satisfied [with me]. He [was seeing] something more. So, ginalingan ko sa classes.”

The second shock to her system came from Tariao’s cutting reprimand: “I don’t care how good an actress you are; I would never cast you because of how you behave in my dance class.”

After her own anger and frustration subsided, Bayani conceded her dance teacher was right: “To be an actor in the complete sense, you have to know how to use your body.  More importantly, my attitude was wrong—para magawa lang, mairaos lang. In dance class, you see the commitment of a person because it shows in her body. Kung wala sa puso, hindi siya lalabas sa galaw.”

She pauses, then continues, “When you hold back, you can’t tell a story. Dapat wala ’yung walls.”

As her own walls crumbled and the actress persona in her embraced her craft, her relations with both Go and Tariao improved. Bayani would later graduate to supporting roles in TP plays like “Anatomiya ng Korupsyon” and the smash “jologs” Shakespeare production “R’meo Luvs Dhew-liett.”

Leads eventually came in productions like Bienvenido Lumbera and Ryan Cayabyab’s “Noli Me Tangere,” where director Paul Morales cast her against type as Maria Clara. In 2007, Bayani the actress found herself wanting to stretch her wings, and departed from TP to try out other theater companies, teleserye and film.

But in every stint she did, she never forgot her teachers. “When you work with people like Herbie, Fil, Anna [Valdes-Lim] and Irma [Adlawan], your attitude and perspective change. Every time I do a project, I think of what they would say, and that I want to make them proud.”

The past few years, she found her niche in indie films, probably because of the creative spaces that the genre allows. One colleague with whom she has established such an artistic partnership is Diaz, for whom she has done the films “Death in the Land of Encantos,” “Siglo ng Pagluluwal” and “Melancholia.”

For her role as the wife of a salvage victim in the martial law era, Bayani won the Vic Silayan Award for Best Actress in 2008. In the current festival-circuit hit “Norte,” she plays a poor housewife in a poverty-stricken Laoag that is priming itself for a revolution at the end of historical time.

Working with Diaz, says Bayani, is “like going back as an actor in the sense that you are expected to create, and not just follow.”

Meanwhile, her time with Chen was a “learning experience. He’s a perfectionist who knew what he wanted.”

In “Ilo Ilo,” Bayani plays the Filipino nanny of a Singaporean family who goes through their upheaval as their country suffers from the Asian economic crisis.

“It was based on Anthony Chen’s life,” she says. “He had a yaya from Iloilo and he never forgot [her].”

That lasting attachment removes any stereotypes in the film: “His treatment of the Pinay is fair,” says Bayani. “He showed everything without bias. Wala siyang kinampihan.”

Her recent experience is causing Bayani to form her own biases and perspectives.

“I have this newfound feeling,” she says. “The international [stints] resurrected my passion for storytelling. You fight to tell your story the best way that you can.”

While indie films will remain her staple, Bayani finds herself wanting to return to the theatrical foundations that molded her.

“I want to go back to theater,” she says—though, in a sense, “I don’t think I ever left. I always bring with me the training and discipline that I learned from it.”

“Ilo Ilo” will open in Philippine cinemas on Dec. 4.

Floating through the fest