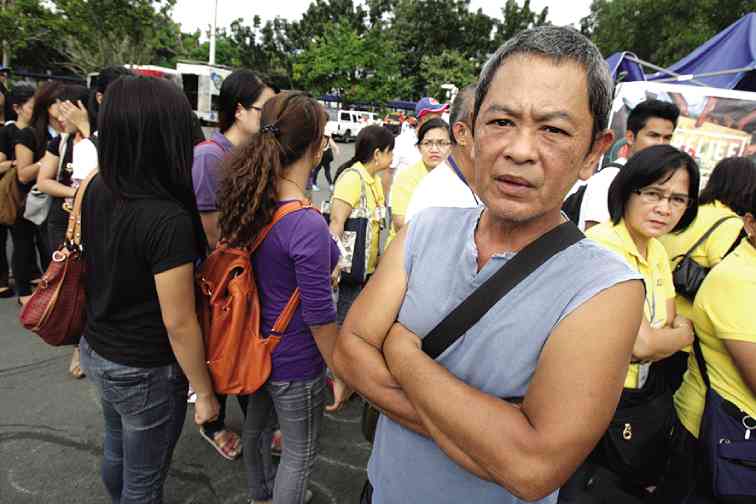 Photographer Alex Baluyut has been cooking since ‘Yolanda’

Alejandro “Alex” Baluyut has hardly slept since evacuees from the provinces where Supertyphoon “Yolanda” struck earlier this month began arriving at the Villamor Air Base in Pasay City.

Baluyut, a veteran photographer, has been busy cooking what he described as “simple meals” like tinola, nilagang manok, monggo guisado, arroz caldo and other comfort food for typhoon survivors as well as the volunteers and military servicemen.

It was a spur-of-the-moment reaction to what Baluyut saw in the news, he told Inquirer Lifestyle, but friends said the man knows what he was doing.

After all, Baluyut is known among media insiders as a “really good cook” whose soy sauce-less adobo and balbacua are to-die-for.

The man described himself as a “kusinero” who learned to cook when he was just a kid as he watched, with fascination, while elders ground rice for kare-kare.

That Yolanda’s victims were being flown to Manila a week after the storm was Baluyut’s chance to work out a plan he has been toying with for the past year or so.

“I was thinking photographers always have a hard time getting access to a disaster, especially if you are a freelancer with no specific assignment,” said Baluyut, who now spends more time teaching the online Master Course on Documentary Photography.

“The only way to get access is to go with either the Red Cross or nongovernment organizations (NGOs) like Médecins Sans Frontières. You go with those people, you hitch a ride. You tell them, ‘I’ll shoot for you if you let me go with you,’” he noted.

Baluyut wondered, what if there were an NGO made up of “voluntary cooks who are also photographers” who could set up mobile kitchens in disaster areas?

The idea is to have a clearly defined base or work area where photographers can do their job and at the same time have a self-sustaining environment where they can feed disaster victims and not go hungry themselves.

“We could do our job better that way, that’s my concept. I noticed that the photographers who covered the storm in Tacloban ended up among those looking for food. Muntik pa silang maging victim,” Baluyut said.

Monitoring the “depressing” news on TV and social media finally made him put his idea to action.

“There was a lot of bashing (of the government’s slow response). Napagod na rin ako… But do I stay in front of this computer and do nothing?” he asked.

Just a few days before the storm hit the Visayas, Baluyut attended a five-day workshop with colleagues and automatically assumed the role of de facto cook.

Little did Baluyut know that his experience of being on his feet and having little rest for the duration of that workshop was a foretelling of things to come.

The photographer noticed that his kitchen equipment were still packed and apparently ready for further action when he heard the news about typhoon survivors arriving at the Pasay air base.

He went online, alerted other photography enthusiasts about his new baby called “Art Relief Mobile Kitchen” and hoped for the best.

In a few minutes, his friend, Dr. Tony Ramos, called to ask how much cash Baluyut would need to support his project.

Not much later, another photographer volunteered her vehicle to take Baluyut and his kitchenware from Los Baños to Villamor.

“May pera na ako, may sasakyan pa ako,” he mused.

Wasting no time, Baluyut called two other colleagues from the Photo Collective. One said yes immediately and agreed to see him at the air base.

The other had other plans but lent Baluyut “a giant kaldero” as a form of support.

Armed with nothing else than guts, Baluyut proceeded to the air base’s grandstand where the military and civilian volunteers received typhoon survivors.

“Other than coming to Villamor to cover the news, I hardly know anything about the place. And I wasn’t really sure whether they would allow me to cook but I decided to set up a station near the outpost in the parking lot and cooked arroz caldo on the spot,” he recalled.

Baluyut said few people paid attention at first, something that worried him since he whipped up a batch for 50 to 60 persons.

The C-130s carrying typhoon survivors arrived every two hours that Friday, Nov. 15. Surely someone really hungry would pass by the outpost and get a whiff of his dish.

A handful of people eventually stopped to enjoy the arroz caldo. By nightfall, Baluyut was scraping the bottom of the giant kaldero.

Turns out, the civilian volunteers and servicemen noticed his station but were too shy to approach Baluyut to ask for food.

By morning, more came asking whether Baluyut had coffee.

The photographer thought it was time to consider turning his effort into a 24-hour round-the-clock operation. All it took was convincing friends to take turns helping out.

On Day 2, Baluyut decided to move his station to the covered walkway leading out of the grandstand. A day later, a mobile phone company set up booths in the parking lot.

Baluyut was offered two for being the first to volunteer at the scene. The photographer took four instead, since more people were turning up either to eat, help with the cooking or provide him with free ingredients.

“The thing is not to go hungry. Puyat ka pero dapat kumakain ka,” he said.

Despite the presence of friends, Baluyut did not leave his station until the following Monday to go home, change clothes and take his turn to look after sons Ricky, 11, and Dylan, 8.

Come Tuesday, the photographer was back in the air base.

The photographer said he has no immediate plans of leaving the air base since his “client base grew 150 percent.”

On the night that Inquirer Lifestyle visited Baluyut’s station, students from two culinary schools helped with the cooking and the systematic storage of ingredients.

The photographer said he learned a lot from the young volunteers and admired how they would not leave the station until the next batch arrived.

“For example, salt and sugar should not be together. Because you (might) make a mistake, so nakahiwalay siya, ganung simple stuff,” he noted.

“You also have to be quick in terms of making decisions, ang daming stocks and you have to remember where and what they are. I learned a lot from them today, those students. Nakita ko ’yung systematic handling of the stocks, you never leave the kitchen without leaving the next one onboard an inventory,” Baluyut said.

The photographer’s tinola with tanglad was the most well-received dish so far.

“I know that people in the Visayas like tanglad in their food. It’s very uplifting. I also put a lot of ginger,” he said.

“One morning, people will unload 20 kilos of chicken on you. And then you have no control over that so you have to cook all of the chicken,” he said.

While whatever is delivered by generous souls to his station determines the day’s menu, the adage “Ask and you shall receive” also works.

There are moments Baluyut said he is thinking of a specific item and it comes as if on cue.

Wednesday night had Baluyut praying for mayonnaise. It was yet to come.

Two freezers, one Baluyut’s own, have been brought to the air base to prevent spoilage of ingredients.

From the handful of survivors and volunteers, Baluyut’s diners have grown to 800 to 1,000 on a given day.

Baluyut has been a photographer for the past 30 years. His most “productive” period was the mid-1980s, in the newspaper Malaya, in the final years of the Marcos regime.

“Masarap ang camaraderie sa dyaryo. I was working for an opposition paper. I was young. The paradigm I was in fit my character perfectly—a kid in my late 20s who wanted to be an activist,” Baluyut said.

On hindsight, the photographer said his apparent restlessness was what brought him to many adventures.

The young man who wanted to be a farmer eventually left Malaya to freelance for wire agencies as he tried “to get my act together.”

Baluyut said “no” when asked whether he took time to lug a camera and take photos of the survivors.

“Ang feeling ko, matanda na ako sa photography. It’s time the younger ones took over. Hindi ako naniniwalang you can stay there forever,” he pointed out.

Baluyut said he would rather see the Villamor experience as “a chance for people to meet and discuss, whether it’s food or what to do about Tacloban.”

Eventually, the exchange of ideas could lead to “a new thing coming out…and a possible shift to new paradigms from a simple thing like cooking,” he surmised.