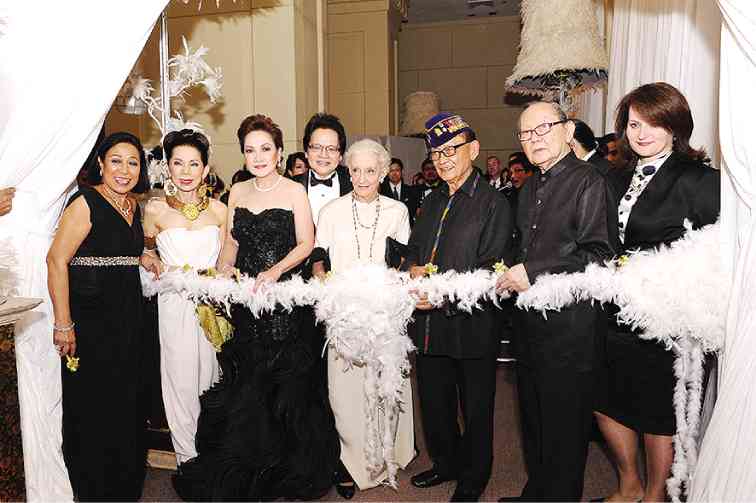 It’s a brand-new day! After the darkness wrought by Supertyphoon “Yolanda” comes the sunshine of worldwide compassion and support for our people.

Last week, almost all social events that had been planned for months were either canceled or refocused on fundraising for Filipinos in the Visayas. For instance, Philippine Tatler postponed its eagerly awaited ball to next year. Kudos to publisher Irene Martel Francisco and editor Anton San Diego for that brave decision.

The spectacular feathered gown that my fave fashion designer Rajo Laurel had made for me for the Tatler Ball will instead have its debut at the “Filipino para sa Filipino,” a fashion extravaganza to be held on Nov. 29, 6 p.m., at the Samsung Hall of SM Aura Premier in Taguig. The event is the local fashion industry’s fundraiser for the entire Visayas.

In the wake of Yolanda comes Tabang Visayas Task Force, an umbrella group that will coordinate various relief efforts. This is composed of the core groups involved with Tabang Mindanao in the late 1990s including Ayala Foundation, Assisi Development Foundation, Catholic Bishops’ Conference of the Philippines, and the foundations of corporate giants Metrobank, Unilab, Zuellig and others.

“Filipino para sa Filipino” will feature over a hundred designers in a show directed by Jackie Aquino and Robby Carmona. Find out more about Tabang Visayas by watching the show at SM Aura.

SM Aura, by the way, has a wonderful Christmas display after its Christmas tree lighting ceremony at the Atrium. It was highlighted by a performance from the Metropolitan Symphony Orchestra.

SM Prime Holdings president Hans Sy and Taguig deputy city administrator Jorge Bocobo lit the Christmas tree. The display transforms the mall into a veritable winter wonderland, with giant reindeer and wispy white flora to get everyone into the holiday mood.

As Christmas nears, I am drawn to events that celebrate the beauty of life. Photographer Rupert Jacinto just launched “Faaabvlous IV,” his latest coffee table book, at the Gallery of The Peninsula Manila.

The book is a collection of portraits of distinguished personalities, including former President Fidel Ramos, who also did the ribbon-cutting at the opening. Guests included many of the book’s subjects such as Italian Ambassador Massimo Roscigno, Philippine National Artist Arturo Luz, Rustan’s president Zenaida Tantoco, painter Betsy Westendorp and the book’s cover ladies, Nene Leonor and Elaine Villar. An exhibit of the photos is ongoing at The Gallery of the Pen until Dec. 2.

I’m glad to note that among the beneficiaries from the book’s proceeds are Yolanda survivors through the AdFoundation’s Kayanihan Project. Major sponsors include The Peninsula Manila, Lexus Manila, Stores Specialists and Titania Wine Cellar.

I love supporting art auctions because they are ideal avenues to raise funds for charity. The annual Carewell Foundation fundraising dinner always includes an art auction, with many local artists donating pieces for Carewell.

This year’s dinner was called “FUNdraiser 2013: An Auction with a 2wist.” The event was packed to capacity, with over 400 guests enjoying beautiful music by the youth players of the Manila Symphony Orchestra, delicious food by the Manila Polo Club and elegant wines care of The Straits Wine Co.

Enthusiasts gamely participated in a silent and live auction of over 80 exciting items, featuring elegant jewelry by Miladay, and luxury items from Cartier, Tory Burch, Ferragamo and Kenneth Cobonpue; exotic weekend getaways at El Nido’s Lagen Island Resort, The Ananyana Resort and Spa, and Plantation Bay; and collectible art by Jigger Cruz, Gus Albor, Nilo Illarde and many other well-known, as well as up-and-coming, artists.

Carewell’s primary objective is to raise funds for medical assistance and psychosocial support to persons with cancer and their loved ones. This year, the group is also donating half of its proceeds to Yolanda survivors.

Michelle Dayrit Soliven, a cancer survivor and Carewell advocate, gave a touching speech about Carewell being a compassionate center and how it was so helpful to her and other survivors.

After her moving talk, I think everyone was a bit more generous and excited to participate at the live auction. Sponsors of the Carewell event included Parkway Cancer Center and Med Central Health System, with support from The Legaspi Collection, Alessi, New Zealand Naturals Ice Cream, Boehringer Ingelheim, San Miguel Corp., Salcedo Auctions, and Ricco and Tina Ocampo of Celestina.

Let me close with a plug for the Noel Bazaar at the World Trade Center, which is ongoing until Dec. 1. The bazaar has over 400 booths and is the perfect place to find value-for-money Christmas gifts.

Among the bazaar’s highlights is the Dingdong Dantes and Marian Rivera Celebrity Ukay-Ukay, proceeds from which go to GMA Foundation to fund school projects in Eastern Visayas.