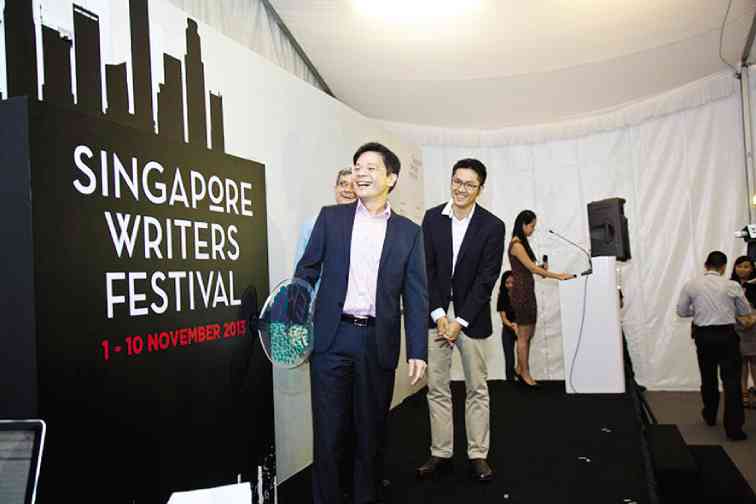 Utopia, dystopia and ‘Disneyfication’ at the 2013 Singapore Writers Festival

The Singapore Writers Festival has grown by leaps and bounds since the biennial event became annual in 2011, but trust writers to bring down the dark clouds on a sunny day and ruin everyone’s bright outlook. As the bard of bleak Philip Larkin would say, “Happiness writes white.”

So the theme of this year’s SWF on Nov. 1-10 was “Utopia/ Dystopia,” and the binary couldn’t have been put in starker terms by the Festival District—the  campus green of the Singapore Management University embodying the first, and the writer’s whine and portent representing the second.

Light and darkness converged in the SWF itself. Running for 10 days and with some 180 writers featured, the festival is perhaps the most extensive writers gathering of its kind in this part of the world.

The SWF provides as well a corrective to Filipinos always hung up on Hollywood and the American bestseller list. It checks their insularity that seems to make them forever ignorant about the geopolitical and cultural currents in Asia.

For example, American journalist Tom Plate launched his newest book during the 2013 SWF, “In the Middle of the Future: Tom Plate on Asia.” It was Plate who had interviewed Lee Kuan Yew, Mahathir Mohammed and other Asian leaders to check American misperceptions on Asia and its rising nations in the 1990s. (During the launch, he said Americans should now watch out for the rise of Indonesia.)

European writers were also represented. This year, SWF trained the spotlight on Nordic writing. Even the French are represented in the persons of  “The Sleeping Beauty” filmmaker and fantasy writer Catherine Breillat and Nobel laureate Gao Xingjian, a French citizen.

But despite its great success, SWF chose to dwell on the negative.

So the first panel in the 2013 SWF had the foreboding title, “Renaissance/ Dark Ages,” the bar a punctuation mark either to disguise an either-or proposition (or question) or to underscore that rebirth and death are two sides of the same coin.  Moderated by lawyer-writer Eleanor Wong, the panel  discussed whether dystopia is a world where no one reads.

Young Singapore playwright-poet Alfian Sa’at lamented the lack both of readers and democratic space for artists on the island-state (Dark Ages). His pessimism was balanced by New Zealand writer Jennifer Crawford, an assistant professor at the Nanyang Technological University, who made optimistic remarks about her students and the enrollment at the NTU’s Creative Writing Programme (Renaissance).

Meanwhile, Goh Eck Kheng of Landmark Books presented the struggles and challenges of publishing (Dark Ages and Renaissance both).

The fact that it is the only SWF lecture featuring local writers should indicate that the topic was very close to Singaporeans’ hearts, betraying their fear that the tropical island utopia they have created may really be a dystopia in the making.

The lecture was prefaced by Singaporean distrust about rapid changes taking place in the world—“Obama, Tahrir  Square, Occupy Wall Street—surely, the future lies in change… But what if these actually change nothing and prove neither brave nor new?”

The two sides of Singaporean utopia are mirrored in the two novels. While “1984” may present Singapore as the end-product of its leaders’ striving to ward off the fear created by being in the midst of larger, perhaps hostile, neighbors, a city-state of efficiency and progress in a neighborhood of chaos and mess, “Brave New World” may present how the city-state has evolved—a shoppers’ haven (Orchard Road and its malls), an entertainment complex (Universal Studios), and a gambling resort (Marina Bay Sands); in short, a pleasure paradise where desire may be the virus that would unravel everything.

Of course, rival Hong Kong is also pure pleasure without the guilt, and it has Disneyland to Singapore’s Universal Studios, but even Disney, to Singaporeans and the SWF, it appears, disturbs and inevitably destroys.

In the “fringe” parallel program of writers’ talks at the Art House, American folklorist and children’s fictionist Terry Windling lashed out at the Walt Disney Co. for dumbing down children’s stories by Hans Christian Andersen and other classic writers and deracinating them of their powerful psychological content, “Now Disney’s ‘Little Mermaid’ has become the official version of Andersen’s tale,” she said.

Perhaps it was dystopian obsession that made SWF invite the atheist Grayling to come to Asia, the birthplace of the world’s major religions.

Grayling spoke on the topic, “A Good Life in a Bad World?”—a predictably British topic laced with irony and condescension. Quite predictably, too, for a Briton and a New Atheist (Grayling forms that rabble-rousing media clique with Richard Dawkins and the late Christopher Hitchens), the smug title and lecture seem to put the onus of the blame about the badness of the world on religion, specifically Christianity.

Of course, for smug Britons with a quaint sense of history like Grayling, most of the wars and conflicts have something always to do with religion and not, say, with British colonialism and capitalism; no, these things should not be blamed for the wipeout of the Indians in North America and the aborigines of Australia, the Opium Wars and the humiliation of China, the bloody Partition of India, and the Middle East conflict.

The smugness is typical of Anglo-Saxon philosophy which is noted for its literalism going by the logic of empiricism or logical positivism. The literalism is quite evident in Grayling’s parroting of Edward Gibbons’ judgment that it was Christianity that caused the collapse of the Roman Empire, and which  led to the Dark Ages. Of course, Grayling and Gibbons ignore that it was Christian Europe that emerged from the Dark Ages, leading to the glory of the medieval ages, which, of course, they denigrate.

Grayling exalts modern enlightenment and says religion should be replaced by “secular humanism” and modern values. GK Chesterton might as well have been talking about Grayling’s lot when he wrote:

“I mean, it will be a melancholy relic of the only period in all human history when people were proud of being modern. For though today is always today and the moment is always modern, we are the only men in all history who fell back upon bragging about the mere fact that today is not yesterday. I fear that some in the future will explain it by saying that we had precious little else to brag about. For, whatever the mediæval faults, they went with one merit. Mediæval people never worried about being mediæval; and modern people do worry horribly about being modern.”

Against the world’s “badness,” Grayling calls for “community” based, however, on secular humanistic values, whatever that means.

But Asian writers can show Grayling a thing or two about “communal values” anchored on history, culture, cosmology and, yes, religion.

Sudhir Thomas Vadaketh, who returned to Singapore in 2005 after studies in Harvard and Berkeley, writes about his bicycle travels through Singapore and Malaysia in “Floating on a Malayan Breeze” (2012, published by the National University of Singapore Press and Hong Kong University Press).

The “road narrative” affords him the chance to reaffirm the ties that bind the two countries together (Singapore used to belong to the Federation until it was kicked out in the 1960s). But he does this without glossing the distinctive ethnic, political, sociocultural features that divide the two, particularly Malaysia’s pro-Malay Bumiputra policy and Singapore’s (or is it Lee Kuan Yew’s?) meritocracy  but strongly anchored on the overwhelming Chinese majority, what some would call as ethnic determinism.

The use of “Malayan” in the title is calculated: Vadaketh is a Singaporean  nostalgic for the time when the two countries were still together.

Vadaketh’s journey back to the core of Asia is echoed in Sunil Nair, a Malaysian who has made a career in academic publishing in London. His first novel, “When All the Lights are Stripped Away” (2012, Marshall Cavendish Editions), tells of a city man’s return to his hometown upon receiving news that his father is dying.

Sense of place and community and a shared past drive the publishing project, “Balik Kampung,” edited by playwright-fictionist Verena Tay and published by Math Paper Press. The book is an anthology of stories by writers, many of them their first time to be published, who have lived in their neighborhoods for 10 years or more.

The length of time appears insignificant until Tay reminds everyone that it is rare for a Singaporean to have stayed in the same house for 10 years; the rapid pace of development since Singapore became independent in the 1960s has meant a constant remapping of the topography and the erection of newer skyscrapers and fancier edifices over the old kampungs, burying in the process personal and family memories.

These works are communitarian endeavors that should illustrate humanism is as much an instance of solidarity as it is of individuality. Perhaps the dystopian fear is merely an artist’s obsession. As the film director Rouben Mamoulian said:

“Ours is a peculiar age—while scientists are lifting man into space, most artists keep shoving him into the gutter. Sex, violence cruelty are, at best, half-truths. ‘Noble impulses’ and ‘immortal longings’ are also part of human nature. Art must be concerned with the whole truth, not just its sickly fragments.”

Stangely enough, Acting Minister Lawrence Wong of the one-year-old Ministry for Culture, Community and Youth referred to the dark theme of the 2013 SWF only once, and he put an optimistic spin to it: He explained that the Utopia/ Dystopia “invites us to consider visions of our future.”

But he adumbrated the negativity of the SWF theme with that of another cultural event going on at the same time, the Singapore Biennale, which is running till February. He said that the biennale theme, “If the World Changed,” “is also about imagining alternative realities, good or bad.”

Still, Wong managed to put a positive note  to the two themes in his address: “Both events reflect on our aspirations and values in history in ways that only art allows us to do so.”

So the SWF—and Asian writing in general—are not as dark or gray as Anglo-Saxon writers would depict the world. Take that, Grayling.