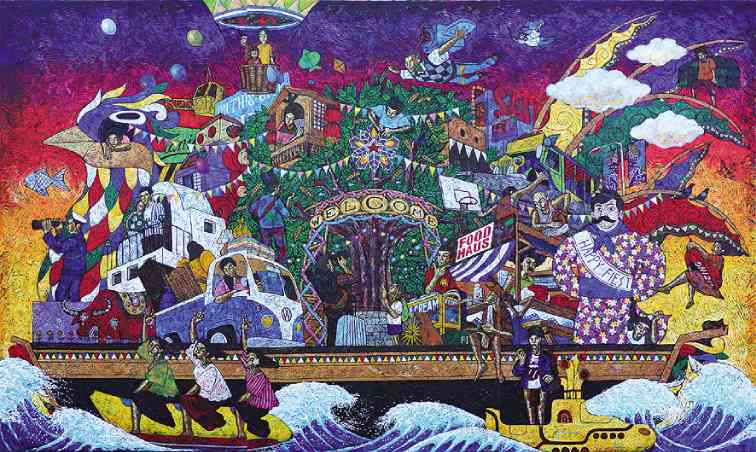 Balanghai refers to the large boats used by early Filipino settlers. It is also the origin of the word barangay—the smallest political unit in the Philippines; a small village, district  or neighborhood.

“Citizen Ship” is a triptych of a huge rooster-shaped barge with the whole community aboard it—culture included. There are symbols of the various Filipino fiesta; a basketball court (for the Filipino’s favorite sport); and other icons from American, British and Japanese pop culture that have made themselves part of ours—The Beatles’ yellow submarine, Domokun, The Rolling Stones. In the middle, a big tree implies the replanting of one’s roots.

“Fleet” is composed of three women riding on a jet ski rushing into life’s ups and downs.

“Courier Express” is an image the artist saw in the floating market during a trip to Thailand—a boatman ferrying different types of luggage of different people.

“Big Catch” shows a man flying a group of kites like taming a school of  fish.

“Love Boat” is a couple traveling together on a paper boat, not minding the risk of their fragile vessel.

“Paper Boat” 1-4 are shaped canvases in the form of paper boats, with people doing their own activities and just enjoying the ride.

John Paul Antido,  “Japs” for short, is a Fine Arts graduate of  University of the Philippines, major in Painting. An artist from Antipolo, his works have been exhibited in Laos, Singapore, Malaysia  and Denmark.

The art works are lively in color and movement. By mixing traditional and modern symbols—backgrounds of fiestas and “natives” wearing Rolling Stones T-shirts—he is able to succinctly capture the vibrancy of Filipino culture, its hybridity and ever-changing nature.