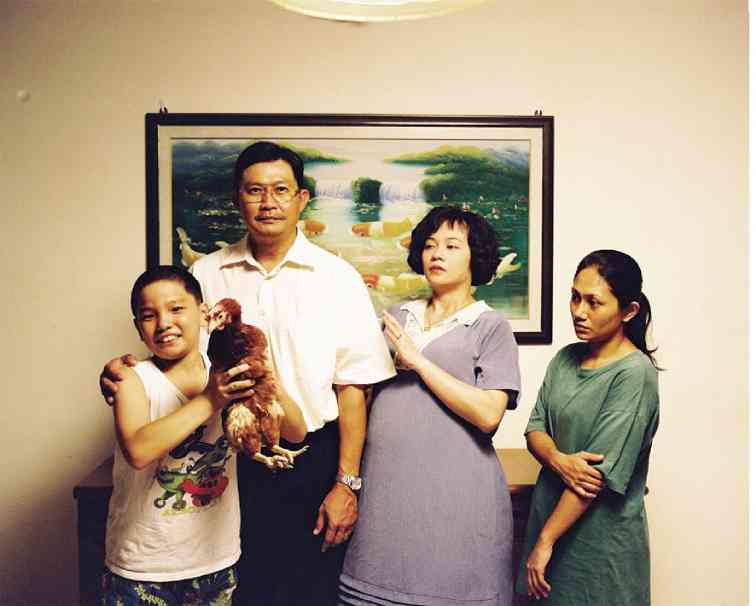 THE LIM family with Terry and Jiale’s chicken

The award-winning film “Ilo Ilo,” by Singaporean filmmaker Anthony Chen, will be having a benefit screening for the victims of Typhoon “Yolanda” (“Haiyan”) on Nov. 26, 7 p.m., at SM Mall of Asia.

“Ilo Ilo” won the Camera d’Or award for Best First Feature in this year’s Cannes film festival and is the official entry of Singapore to the 2014 Oscars’ Best Foreign-Language Film category.

The film depicts the relationship of a Singaporean family with a Filipino maid.

Despite having many people jobless during the 1997 Asian financial crisis, Terry (Angeli Bayani) finds herself landing a job as a househelp in the Lim family. She confronts the challenges of  housekeeping for a pregnant  Hwee Leng (Yann Yann Yeo) and jobless  Teck (Tian Wen Chen). She also looks after the 10-year-old brat Jiale (Koh Jia Ler).

The Singaporean family is having a rough time as a result of  the recession: Teck has been sacked in his job as a salesman. To support his family, he applies for different jobs and ends up doing  temporary work as a security guard. Meanwhile, his wife continues working as a secretary amid fear of getting fired herself.

As the couple struggles with finances, son Jiale  creates trouble at school and for his Filipino nanny. But Terry eventually manages to capture the loyalty of the kid, and creates a special bond with him. This sparks jealousy in Hwee Leng, prompting her to keep a stricter eye on the domestic helper.

When the the economic crisis worsens, the couple decides to send Terry back to the Philippines because they cannot afford anymore her services.

The film presents economic pressures as they’re brought to bear on people from different classes and ethnic backgrounds. With subtle drama and humor and in beautiful images, the movie  shows the heartwarming relationship between the domestic helper and her employers as they try to break the walls that divide them and become intimate with each other, almost like a family.

The incredible closeness between Jiale and Terry makes the film special. As Terry fills in some of the maternal responsibilities that Hwee Leng can’t fulfill due to her work and pregnancy, the stubborn Jiale becomes at ease with her nanny and treats her as if she’s a  Lim.

It is also refreshing to see that Terry’s character is presented  not as weak and helpless. She’s depicted making respectful objections to Hwee Leng’s accusations. She’s also not overwhelmed by Jiale’s brattish behavior.

The cast of “Ilo Ilo” delivers wonderful performances. Filipino actress Bayani delineates the role of Terry sensibly and connects well with the Singaporean cast. Yeo, who is actually pregnant during the film, effectively delivers the role of the strict employer and  mother. First-time actor Koh surprisingly gives a competent  performance as the hardheaded Jiale.

During the Singapore Writers Festival last month, “Ilo Ilo” director and writer Chen said the film was semi-autobiographical and admitted he had difficulties in writing and directing his first full-length film.

“I have mastered the process of [creating and writing] short films, and making my first full-length film did not come easy,” Chen said. “When I was writing, it was a recollection of my childhood. But not everything is based on real life.”

The filmmaker has been to the Cannes film festival in 2007 for his short film “Ah Ma,” which won Special Mention.

Chen said that when he was young, his family had a Filipino domestic helper named Teresa Sajunia whom they fondly called Aunt Terry. She came from the province of Iloilo. Chen’s relationship with Sajunia is one of the inspirations of the film.

When the Philippines was hit by Yolanda (Haiyan) and the province of Iloilo was one of the affected areas, along with  Leyte and Samar, Chen got concerned about the fate of his former nanny.

Chen said he found out Sajunia survived the storm.

“For those of you who have been asking, Auntie Terry and her partner survived the storm and are safe and sound. Let’s do what we can for the people of the Philippines,” Chen wrote on his Facebook.

In an interview with Channel NewsAsia  last Nov. 14, Chen said he wanted to hold a charity screening of “Ilo Ilo” in Manila for the benefit of the victims of the typhoon.

“Ilo Ilo” made its debut screening in the Philippines during the Cinema One Originals Festival last Nov. 13 at Robinsons Galleria. It was graced by director Chen and actress Bayani.

The film will be screened in Philippine cinemas starting Dec. 4. “Ilo Ilo” is distributed nationwide by Origin8 media.