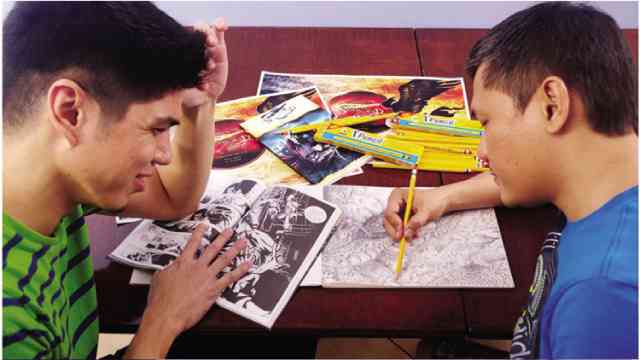 How the ‘tikbalang’ is capturing the imagination of Filipino readers today

Portrayed as a humanoid with the head and legs of a horse but with the physique of Manny Pacquiao, the tikbalang of Philippine folklore has captured the imagination once again of 21st century readers, thanks to a local comic book series produced by writer Mervin Ignacio and artist Ian Sta. Maria.

Named Makabo, the English-speaking tikbalang has made it his mission to defeat the Asuang clan in the Skyworld series and in the process was in the Top 10 Bestsellers list of National Book Store for four consecutive months after its release. The half man-half horse, nevertheless, does not confine himself to the forests of old. His quests in Skyworld also take him to SM Mall of Asia and Ayala Avenue, according to  writer  Ignacio and   Sta. Maria.

Unlike the Filipino komiks writers of the golden age of the ’60s and earlier who were backed by huge publishing houses, Ignacio and Sta. Maria are self-published comic book creators whose works are now being promoted by National Book Store. They grew up in the ’90s strongly influenced by America’s DC and Marvel comic book heroes.

In 2002, the two who were then working in the same ad agency decided to create their own unique comic book hero inspired by the growing popularity of the literary genre in both English and Pilipino.

At the start of their partnership, Sta. Maria relied on digital programs to create the renderings and layouts that accompanied Ignacio’s inventive plot and dialogue. Unfortunately, the computer that contained their initial works crashed and they lost everything. Both decided thereafter to initially do their works in pencil, to digitally scan them then do the final art work online.

Just like the first step of a long journey, the first stroke on paper of a comic book illustration can either prod or impede the creative process, says Sta. Maria, who has been named as an artist to watch in the fledgling Philippine comic book scene.

A pencil with a non-secure graphite center or lead will tend to break when newly sharpened, a cause for frustration and creative blocks when experienced repeatedly. Implements like T-Pencil, a product of Amalgamated Specialties Corp. (Amspec), does away with those possible blocks. Amspec is also the licensed manufacturer of Crayola in Asia.

Unlike other pencil brands in the market, T-Pencil ’s graphite is glued to the wood in which it is encased from end to end. Substandard ones are only glued in spots and tend to break during sharpening. T-Pencil is thus “tough to the tip,” say Amspec executives, and can keep up with Sta. Maria’s quick and fluid strokes.

Skyworld author Ignacio is himself particular about pencils. He “psyches himself to write by sharpening a bunch of pencils until I run out of reasons not to work on a story.” A brand that can easily be sharpened keeps the creative process flowing. Made of cedar wood,  T-Pencil imports this species from managed forests in the US. T-Pencil line also has a triangular barrel that is easy for left handed individuals to grasp and helps them to avoid cramping.

In the Afterword of one of their “graphic novels,” as comic books are now called, Ignacio and Sta. Maria reportedly did not really intend to concoct history, myth and legend into one engaging tale for the modern-day reader. The two just wanted “to do a comic book about a tikbalang with a big-ass sword and have him kick aswang ass.” Their passion for telling and illustrating a good story—supported by quality pencils—accomplished the rest.