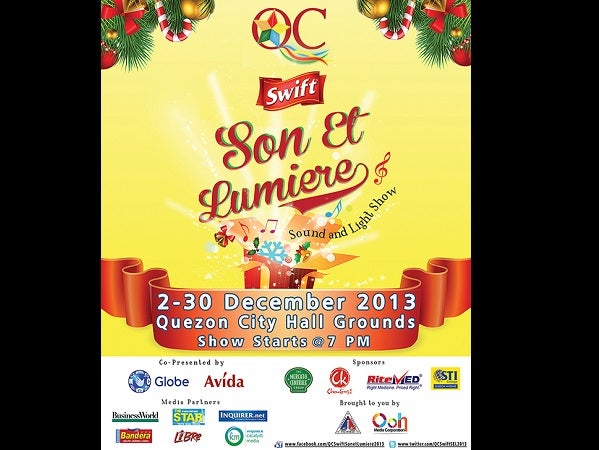 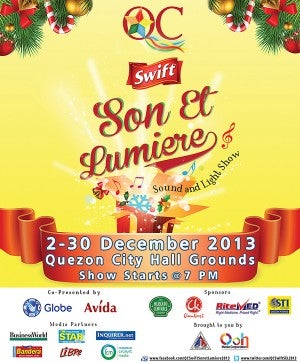 For the very first time in Quezon City, a unique form of night time entertainment that is usually presented in an outdoor venue of historic significance is coming!  OOH Media Corporation (OMC), the Quezon City Government and Swift Hotdogs and Hams, will bring you a spectacular sound and light show entitled “QC Son et Lumiere 2013”.

For the month of December, (from December 2 to 30, 2013) starting at 6:00 pm all the way to 12 midnight, the façade of the Quezon City Hall will be transformed in to an extravaganza of sounds and lights. Using energy efficient and environment friendly LED luminaries accompanied by digitally arranged medleys of music, OMC will transform the Quezon City Hall Façade and Grounds to create a musical and visual once in a lifetime experience for the enjoyment of the young and old alike.

Add to this month-long event of entertainment, the unique outdoor dining experience brought by the Mercato Centrale Group boosted by a night market put together by RVJ Event Philippines. The City Hall grounds, will become a one stop shop for busy bodies, late night revelers, foodies and shop-a-holics!

It is also an opportune time for the launching of the “Juan Peso Initiative”, a drive to aid the rehabilitation efforts of Quezon City for the victims of STY Yolanda particularly the municipalities of Palompon, Santa Fe and Tolosa.

Quezon City Hall is just a stone’s throw away from the Quezon Memorial Circle along the Eliptical Road in Diliman, Quezon City.