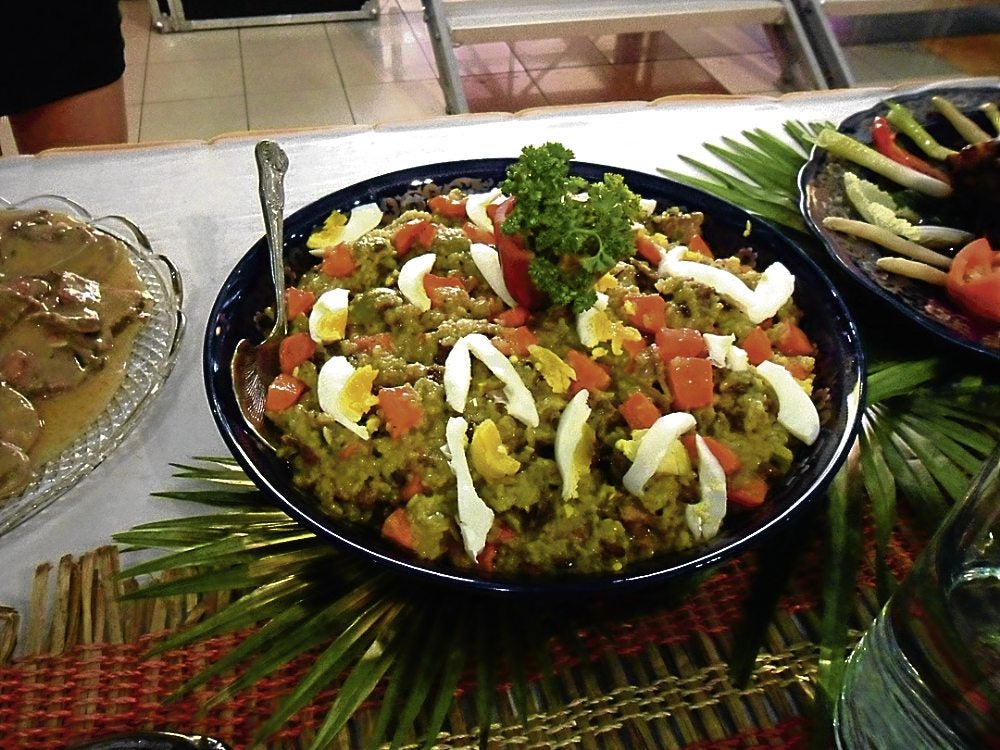 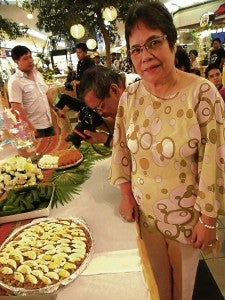 I’ve seen those bamboo arches at fiestas but it was only recently that I learned what they’re called—singkaban. It’s an art form using bamboo as medium, some parts shaved so the curly fibers form part of the décor, and some cut into pieces and put together to form figures such as flowers.

The artist is known as Mang Kiko from Hagonoy, Bulacan, and his art graced the entrance of SM Mall in Marilao as the whole province celebrated the Singkaban Festival.

One of the events was a competition by the town cooks, who would do their own version of pancit Marilao, the noodle dish the town is known for. I still remember tasting two versions of those. One was at Ka Yoying Pancit Palabok and the other at Nena’s Pancit Palabok. So, I had a reference point by which to judge the cooking contest.

The noodle is bihon and the sauce or palabok has the flavoring from broth and/or shrimp juice thickened with egg or flour, then colored by achuete. Garlic is a major flavoring, and so are patis, salt, pepper and calamansi. Chicharon (pork cracklings) adds not only flavor but texture.

The Ka Yoying version has chicharon bigas, rice crackers and a cup of rendered pork oil poured over the pancit. The pancit of Nena’s, on the other hand, adds pig’s brain, which certainly makes it richer and oilier.

All the judges noticed that the eventual winner cooked slowly, letting the garlic from four heads brown unhurried, emitting an aroma that promises good eating later. Good cooks have this quiet way about them. I have come to that conclusion through years of doing my judging chores.

But the pancit wasn’t all that was cooked that day. Four contestants also concocted a dessert that included pastillas as a major ingredient. We were told that pastillas in packs, instead of individually wrapped, can be ordered in San Miguel, the town known for the milk candy. And at the awarding, several Bulakenyo brought the dishes of their homes and restaurants.

The hamon Bulacan is one of the recipes of the late Mila Enriquez, a great promoter of the province’s cuisine. Her family brought it there—pork belly made into ham. There was also 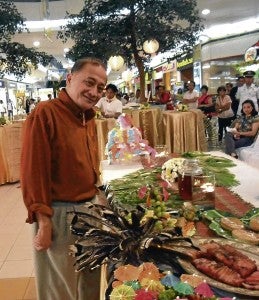 gorgorya, a traditional cookie made of batter then shaped into balls with ridges done with a fork. There was her dessert called pasensiya, made of crushed Jacob’s crackers and condensed milk. The name, reflecting Bulakenyo sensibility, asks for patience from the eater as that is all the host can offer.

Luz Ocampo, a treasured Bulacan artisan, was also there. She is known for her pastillas wrapper cutting and fruit carving. One of the specialties brought in was her carved dayap cooked in syrup, then stuffed with pastillas just before serving. She is now 90 years old, and those who know her hope she has passed on the art to the younger generation.

It was a happy reunion with Dez Bautista, director and art director, and my first guide to Bulacan cooking, who brought me from town to town, making sure that I learned about the culture as well. He brought fiesta cooking, pavo embuchado with a pork filling, bringhe (rice cooked with turmeric and coconut milk, lengua (ox tongue) in gravy with olives.

Yoying sent her sister Neny to bring her famous pancit Marilao. Another one brought crab cooked with miswa, several rice cakes, pickled dampalit (a form of grass harvested from the walls of fishponds) and the sweetened fruit of the nipa palm.

The nipa palm or sasa is ever present in the environment and in the cooking of Bulacan. Although nipa forests have been depleted through the years, there are many dishes made from its products, like the sweetened fruit as well as the vinegar that has been branded as Paombong, from one of the towns.

Two dishes presented there—paksiw sa tuba and lumlom—were new to me, and used the tuba or toddy of the nipa. We thought those needed plain rice because both were so flavorful. 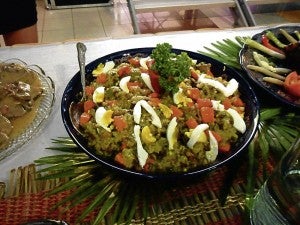 Paksiw sa tuba is done by lighting the hot toddy of the nipa palm over and over until all the alcohol has evaporated, then putting in the ingredients intended to be cooked. Inside the clay pot that day, the paksiw had frog and small crabs I call talangka, but which fellow judge Sonny Tinio said is called damuko in Nueva Ecija.

The tuba used has to be just tapped, always done in the morning, and so sweet that it is called tinamis. When harvested late in the day, tuba is called balasubas, a hilarious name because it suggests something that is haphazardly done.

Lumlom is fresh tilapia buried in mud to make it rot for a day, and then cooked as paksiw sa tuba the next day. While the Bulakenyo with me loved it, I have to get used to its slightly fermented taste. It’s pulutan favored by drinkers.

What I did miss that day was the pancit cooked in Hagonoy by a lady who was called Konsehala by everybody (she was a town councilor). That was years ago. She also had bangus placed inside two leaf bases of the nipa, sealed with mud, then grilled with charcoal in a hole dug near the nipa palms.

Like the singkaban and the other Bulacan dishes presented that day, I hope someone in Hagonoy is still doing that pancit with the seafood and small crabs and the cooked bangus in the mud oven.

The National Food Showdown, a culinary competition, will be held Sept. 17-18 at the World Trade Center. Watch as professionals and culinary students compete in several categories.