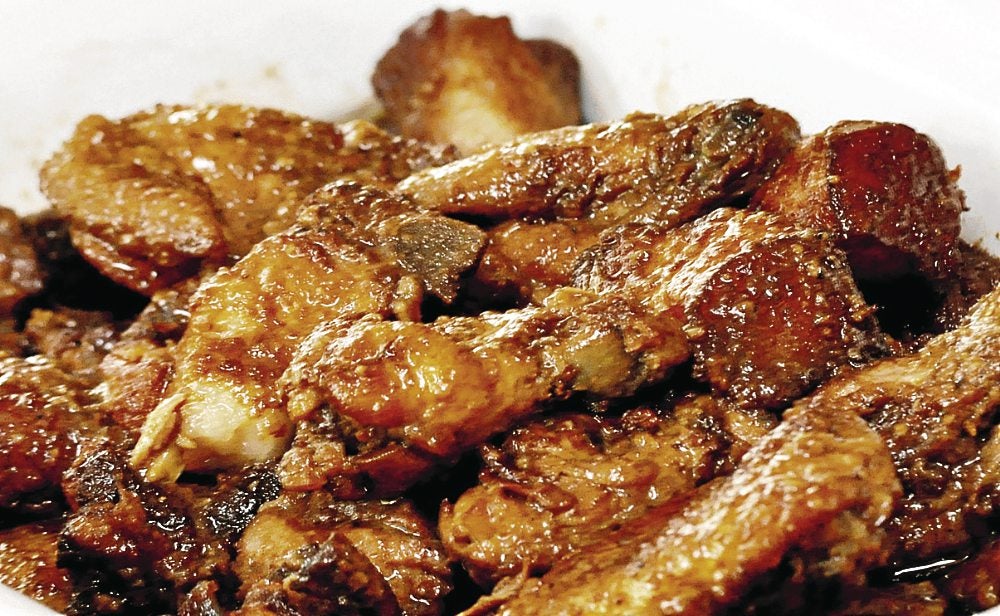 ‘Lechon kawali’ made into ‘adobo’ They call it the Duavit Killer Adobo.

And, why not? The pork and chicken adobo, marinated in tons of garlic, is served warm swimming in its own fragrant oil. The dark brown-colored sauce comes from frying the pork separately to almost lechon kawali (crispy and crunchy) quality before the meat is returned to the simmering broth.

Along with the pungent aroma of sweet garlic, the more-salty-than-sour flavor of this dish further intensifies as it is stored and reheated several times.

The family uses pork belly (liempo) with all its fatty layering to make this adobo extra-luscious.

The Duavit clan enjoys their adobo with mounds of rice gently smothered with adobo sauce. The perfect balance of soy sauce and vinegar in the dish cuts nicely into the tender meat. The loads of garlic (half a kilo for a kilo of pork and chicken) also lends the dish a richer taste.

The adobo is paired with either sinigang na hipon or halabos na hipon.

Yes, Manang Elena (Padayao) has been with the Duavits since 1984. She introduced this cholesterol-packed adobo to the family after she learned it from a cooking class sponsored by her former employer.

“It’s my own original version of adobo, and it’s easy to cook,” says Manang Elena, who has been whipping out this adobo in almost all occasions in the family—reunions, political meetings, board meetings, etc.

“Everyone asks for Manang Elena’s adobo,” says 24-year-old Rosana Duavit Vazquez, granddaughter of Vilma. “When we have our family reunions, the first thing we say after greeting one another is, ‘where’s Manang’s adobo?’”

Rosana adds: “Ever since I was a baby, this has been our kind of adobo. It’s like any standard adobo but I’d like to call it lechon kawali made into adobo. It’s really delicious. The meat is still crispy even when served with the sauce.”

“We love the layering of the pork fat or everything sinful,” Vilma quips. “But, believe it or not, our cholesterol is normal. We just love Filipino food. We prefer the saucy type of adobo.”

Rizal Rep. Joel Duavit, son of Vilma, shares that the adobo recipe had evolved over time to suit the taste of the family.

“We like it garlicky more than the sour taste of the dish,” says Joel. “The adobo is actually best eaten on the third day with kanin lamig (leftover rice).” 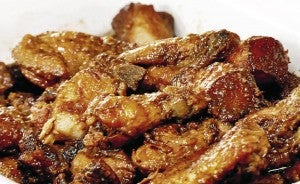 Manang Elena cooks about 20 kilos of chicken and pork for the adobo whenever there are occasions in the house, or when the family goes to their other house in Binangonan, Rizal, for a get-together. They would wrap the steamed rice topped with adobo in banana leaves with salted egg and tomatoes. Manang Elena’s other specialties include kare-kare, menudo, barbecue and lechon kawali.

Even the friends of Duavits have gotten hooked on Manang Elena’s adobo.

“They never fail to ask for take-outs, that’s why I always have ready plastic containers for them,” says Vilma.

In fact, some of their friends would even send their maids or cooks to learn Manang Elena’s recipe. Gretchen Oppen Cojuangco, wife of businessman Eduardo “Danding” Cojuango, sent her cook to the Duavit house to watch Manang Elena cook the dish.

Manang Elena would also hold cooking demonstrations for the family and friends of Vilma’s children in-laws. However, for some reason, many still find it hard to duplicate Manang Elena’s adobo when they get home.

“Even if we give them the exact brands of the ingredients, it’s still not the exact taste that they’re looking for in Manang’s cooking,” Vilma observes.

The family simply presumes it’s the TLC (tender loving care) that Manang Elena puts into her cooking that makes a big difference. 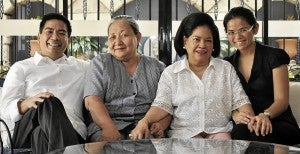 The Duavits’ Sunday get-together is not complete without the adobo. Whether it’s being held in the family house in Greenhills or hosted by the children in their respective houses, the family adobo is a must-have.

Judith and Jack, says Vilma, also have a passion for cooking which they got from their late grandmother Rosa Muñoz Duavit, or Lola Osang. Judith’s specialties include Osso Buco, paella, gourmet pastas, Oysters Rockefeller, etc.