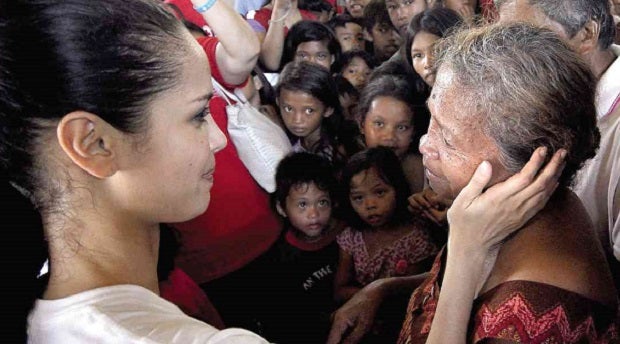 TACLOBAN CITY—It was a bittersweet moment for Miss World 2013 Megan Young, who led in the distribution of relief on Friday to hundreds of survivors in areas heavily affected by Supertyphoon “Yolanda.”

Although she was happy to be back home, she said she was deeply saddened by the extent of the damage caused by the supertyphoon.

“It’s very sad, especially seeing the children who lost their loved ones and those who took care of them,” Young, the first Filipino crowned Miss World, told the Inquirer in an interview.

Young first visited the town of Basey in Samar before proceeding to Tacloban province, where she stopped by the Redemptorist Church, which served as an evacuation center in Tanauan, Leyte.

In Basey, she and her group visited a clinic and a water-treatment facility set up by the Red Cross.

She shook hands and talked with evacuees at the Redemptorist Church, where 935 Yolanda survivors from 15 villages in Tacloban have sought refuge.

Cristine Matandag, 13, who was carrying her 1-year-old sister Luisa, gave details of their experience during the superstorm but also requested her picture taken with the actress-model, who was mobbed by the evacuees.

Her visit at the Redemptorist Church, where she was welcomed by parish priest Eliodoro Reteracion and Tacloban Red Cross administrator Jenny Chico, lasted for about 30 minutes.

“She is very beautiful and she smiles a lot,” said Rodolfo Sumaya, 70, who was happy to see Young although he had no idea she is an international beauty titlist.

Young came on the last day of the evacuees’ stay at the church after they were given notice that they would have to leave the place by Saturday. They have been camping out in the church for 21 days.

“Tomorrow (Saturday) will be our last day here. We hope they will give us at least a four-day extension,” said Estrella Buranday, 48.

According to Buranday, they were informed early this week to leave the church Saturday and return to their respective barangay (village), join their relatives or transfer to other evacuation centers.

“Where are we supposed to go? Our relatives were also affected by the typhoon. Evacuation centers are now brimming with evacuees. We have no home to return to,” Buranday said.

But Reteracion said the 21-day stay of the evacuees—consisting of 208 families—was “more than enough.” “We have helped them,” he said.

Reteracion said they have to clean up and prepare the church for the Christmas Masses.

He added that they have offered P1,500 in financial assistance as well as blankets, mats and even construction tools to each family.

Young and her group also visited Tanauan Church where they distributed relief to typhoon victims who lined up not only to receive assistance but also to get a glimpse of the beauty queen.

“She is beautiful. Seeing her makes me forget my problems,” said 28-year-old Ana Saballa.

Young said that as a Red Cross volunteer, she would personally check on the concerns and needs of the evacuees and others affected by Yolanda.

She also expressed hope that her visit to the typhoon-ravaged areas has made the evacuees happy.

Eastern Visayas survivors to get 100 bunkhouses