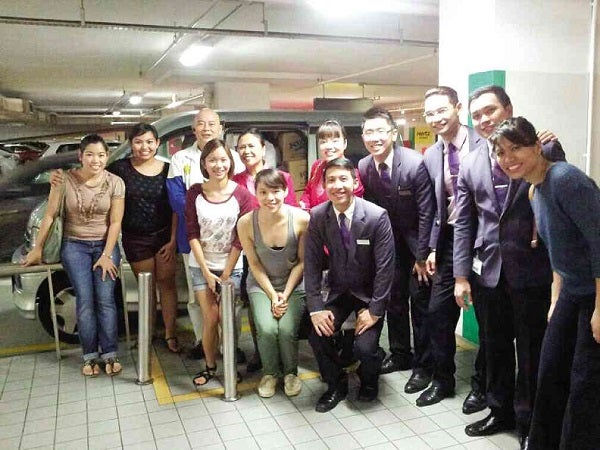 UNCLE Darry, in a Pilipinas jacket (third from left), with new friends Imet through the Typhoon “Yolanda” donation drive.

Selfless Singaporean does his part to help relief operations

“My small contribution to the Pinoys in need …”

It was a short message that answered our problem of transporting the donations collected for “Yolanda” victims. Uncle Darry, a Singaporean, offered his car service for free when he learned that we were doing a donation drive.

Living overseas is not always easy, especially when calamities hit home and you feel helpless not being physically there to make sure your family is safe or  to extend help. You rely on news from the television, or if you are stuck in the office, from the Internet and text messages from people back home.

Times like these you can’t just sit and wait. Something has to be done even from thousand miles away. When a colleague asked me what the office could do to help, a friend told me about her plans. We began asking around for donations, posting on Facebook what items were needed and how others could help. We relied on our network of friends to pass the message along. Soon enough, calls, texts and inquiries started coming in. There was an overwhelming response from Singaporeans, OFWs and other foreigners, all offering to help through donations.

Logistics proved challenging since we volunteered to pick up the donations. We struggled to find a way to transport several boxes of relief goods that wouldn’t fit in a cab. Luckily enough, a friend told me she knew someone who could transport the boxes for free. Uncle Darry arrived in a jacket emblazoned with the Philippine flag, cheery and ready to help. He made sure that all the boxes were in his mini van, properly arranged and accounted for.

As we drove, I noticed the baubles in his van, there were jeepney and kalesa models, car window curtains you often find in jeepneys, DVDs of Tagalog movies and Magic Sing, to entertain his passengers. I was already feeling right at home when he popped a CD which started playing Regine Velasquez’s “Dadalhin.” He told me that his favorite was Aiza Seguerra and he also liked Gary V.

He talked about his trips to the Philippines and how much he enjoyed being around the jolly Pinoys. I guess that explained his choice of providing transport service exclusively for Pinoys for the past four years.

He wished us luck and made a small request, to comment on a blog about him and to recommend him to friends who might need a ride. Done and done.

You know how you keep searching on the web for validations to restore your faith in humanity? If you had the chance to meet Uncle Darry and the strangers who went out of their way to help and give, they are proof that humanity isn’t lost after all. We don’t need another tragedy to bring us together. There are still thousands of Filipinos struggling to get back on their feet after what happened and it’s far from over. Help is still needed. Give what you can, ask and encourage anyone you know. Who knows, you could be another one’s proof.

Miko Cabuyadao is a sometimes off-the-wall 20-something Pinoy living in Singapore.