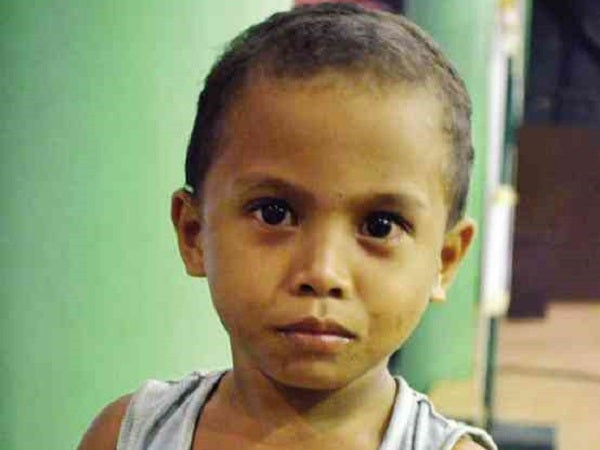 This story really moved me. The boy’s name is Benjie. He begs for money every day in Butuan City. He was near one of the drop-off stations of our donation drive for the victims of Supertyphoon “Yolanda” manned by members of the Alpha Phi Omega.

One of our volunteers in the drop-off station was surprised when Benjie handed him a P1 coin. Apparently, he was giving his donation, taken from the proceeds of his begging. That caught everyone by surprise. But the story doesn’t end there. Several minutes later, Benjie came back to the station and gave another P1 coin. Maybe he realized  his first donation was not enough so he came back and gave another peso.

Even in his situation, where he begs for money and, on many occasions, is ignored, Benjie possesses the value of being socially responsible. If in his young heart and mind he already feels the responsibility to help those in need, the more that we should feel the same kind of responsibility.

Benjie Bermoy is just 4 years old. He has two other siblings, a boy and a girl. His father has no permanent work and only acts as a “spotter” in the parking lot of Mang Inasal. His father used to work as a construction laborer but due to the scarcity of work available, this is the only way he knows to earn money. All three children beg in the same area where their father does his “spotting” because nobody can look after the children. Benjie and his family live in Brgy. Obrero, Butuan City, and are currently renting a small house for P30 a day. Benjie left them for another man. They do not know of any other relatives here in Butuan.

I see Benjie more often now. I sometimes have little chats with his father. I lead a small group of volunteers and part of my advocacy now is helping indigent children. We’re arranging to have Benjie and his siblings go back to school.

Let us all be Benjie at this time where thousands of our countrymen are dying and suffering. We can all be like Benjie every day.

Eldie Nollora David is an active volunteer of BiG-I Bridge the Gap. (facebook.com/groups/ibridgethegap) If you want to help Benjie, e-mail [email protected] or call 0947-8087464.