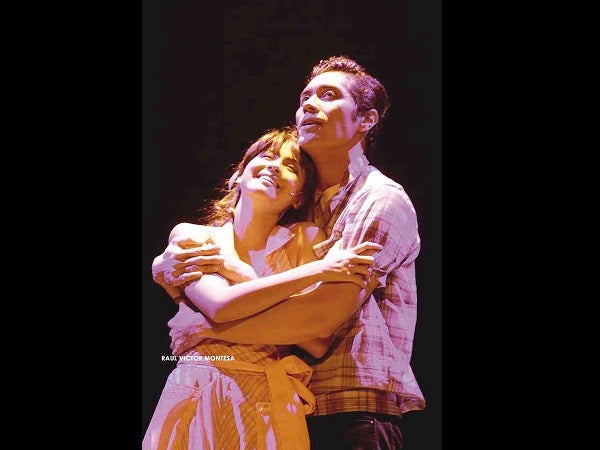 “Sexual tension blows up Makati theater.” Now that’s a rather crass way of summing up 9 Works Theatrical’s “Grease,” but really, inside the Carlos P. Romulo Auditorium, where this production plays until Dec. 1, the air feels so thick with testosterone and estrogen, it’s almost suffocating.

Which is to say, this latest local staging of Jim Jacobs and Warren Casey’s cult musical about teenage American troubles of the 1950s gets it right—part of it, at least.

When it premiered on Broadway in 1971, “Grease” was lauded for painting an astute image of hormone-infused raunchiness unseen in earlier attempts to capture the vulgar spirit of adolescence (“West Side Story” and Shakespeare’s “Romeo and Juliet” being the most notorious examples).

Such an image is ever present in this production directed by Robbie Guevara. The 10-person main cast playing the T-Birds and the Pink Ladies—two cliques of high school seniors in fictional Rydell High—completely embody the rashness and impulsivity of youth. It’s as if they’re one cigarette puff away from bedding each other or brawling with the audience.

The problem is that this “Grease” also finds the need to be as loud as possible, oftentimes to jarring effect.

Make no mistake: The singing here is glorious. Just look to Vince Lim’s rendition of “Those Magic Changes,” where, as guitarist superstar-wannabe Doody, he scales the number’s ever-ascending chorus with remarkably smooth control. (And that’s unsurprising: Lim is part of the illustrious Ryan Cayabyab Singers.)

Other songs, however, become excuses for this production to jackhammer its put-on rough-and-tough appeal straight into our eardrums. The most atrocious example comes not even 15 minutes into the show.

In “Summer Nights,” arguably the musical’s most popular tune, we are first properly introduced to the lead characters, Danny Zuko and Sandy Dumbrowski, as they recall to their friends their short-lived summer romance. The lyrics’ mushy nostalgia—“Summer lovin’ happened so fast…/ I met a girl crazy for me/ Met a boy, cute as can be”—presents the song as an occasion for both playfulness and subtlety.

This version is playful alright; it’s also overblown, oversung, and devoid of nuance or personality, with a grand choral finish that threatens to bring down the ceiling.

Loudness, however, is absent in this production’s treatment of the musical’s book and its riotous comedy. One suspects it’s because for much of the show’s two-and-a-half-hour run, everyone’s quite busy perfecting his or her New York accent—variations of it fly across the stage—that jokes simply fall flat or don’t register with the audience at all.

Only Reb Atadero (Roger) seems completely at ease with the musical’s humor, effortlessly belting out his butt-showing number, “Mooning,” and affording the production its surprise show-stopper.

The disheartening curiosities don’t end there. For a musical that’s supposedly high on hormones, the overall dancing, on a two-tiered set designed by the inventive Mio Infante to look like a jukebox, is marred by spots of sloppiness.

The Act I opener, the title song, which was first heard in the 1978 film adaptation starring John Travolta and Olivia Newton-John, looks like the work of an inexperienced bloke from high school instead of choreographers Arnold Trinidad and Francis Matheu.

(The Act II opener, set on prom night, is less of a mess.)

The Act I ender, “We Go Together,” now has a dance-along sequence, where the cast break the fourth wall to teach the moves to the audience in the hopes that braver ticket-holders would actually join them. But this just serves to wreck the momentum of an otherwise decent finish for the evening’s first half.

9 Works’ “Grease” also has the added thrill of having different surprise guests play the role of Teen Angel for every performance. On Nov. 9’s opening night, it’s JM Rodriguez (Mark Cohen during the Philippine premiere of “Rent” 14 years ago).

In his four minutes onstage, Rodriguez manages to outshine every single number that precedes his. His booming voice and overflowing charisma literally set the song and the stage ablaze, at a time when the proceedings are in danger of dragging.

Moreover, Rodriguez’s thoroughly corporeal cameo only highlights how one-dimensional some of the characters are, even as they sing in the title song, “There is a chance that we can make it so far/ We start believin’ now that we can be who we are.”

Flimsy characterization, sad to say, is what saddles this production’s leads.

Gian Magdangal perfectly captures Danny’s vulnerability, like a man-child who suddenly finds himself under the glare of the spotlight. His unfussy delivery of his Act II solo, “Sandy,” aches with the longing of young love.

But Magdangal seems to forget that Danny is also the leader of the T-Birds, who identify as greasers with their rock-star getups and slicked-back hair. He can play in-love and in-trouble, but you wouldn’t really listen to him come gang-war time.

In this case, the leader of the T-Birds appears to be Kenickie, as portrayed by debuting performer Rafa Siguion-Reyna. Tall, stately and chiseled, Siguion-Reyna casts a commanding presence, even if his “Greased Lightnin’” is not exactly spectacularly sung.

(The most spectacular portion of that number is the transformation of the titular car—which first appeared, by the way, in 9 Works’ “They’re Playing Our Song” earlier this year).

Presence is what Frencheska Farr also lacks in her stage debut as Sandy. Her voice is truly a thing of beauty, her crystalline tones     allowing for a luminous rendition of the Oscar-nominated “Hopelessly Devoted to You.”

But as a character, her Sandy is a wisp of air, as lightweight as her innocence and as unreal as her notions of purity.

When, at the end of Act II, Sandy finally assumes the form of sex goddess in heavy makeup, Newton-John in the film sizzled with newfound sultriness. Here, we see right through Farr; her masquerade makes her look like a naïve provincial girl playing dress-up.

In fact, among the four principal characters—nay, the entire main cast—the only one who comes across as a totally real person is Betty Rizzo.

Jennifer Blair-Bianco, in her first musical role in the Philippines, is captivating as the sharp-tongued and sarcastic Rizzo. And when she sings “There Are Worse Things I Could Do,” it is to inform us of the character’s bitterness, as well as her many-layered philosophy, giving this production its singular shining moment of true humanity.

That number comes late in the second act, however, and by then, we’ve had enough of this production’s lack of sophistication. Too often, 9 Works’ “Grease” comes across as that jubilantly rambunctious kid, the one you know would be fun for company but would rather keep a safe distance from for fear of getting manhandled.

Even the curtain call is not spared, as the cast blares on with a medley of the songs while taking their bows, ensuring that our ears are stuffed to the brim with the music.

There are worse things this production can do, but as it is, it’s already quite exhausting.