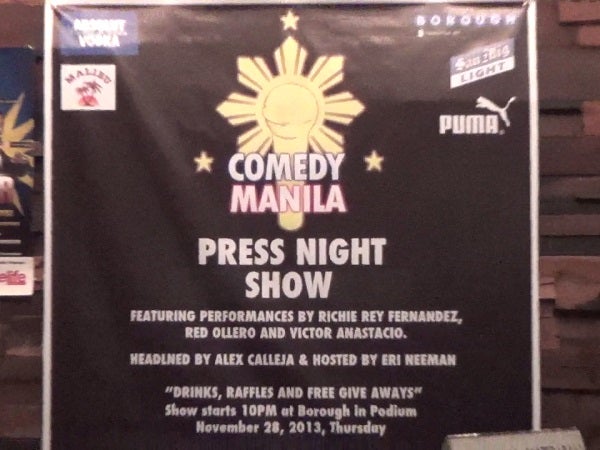 Comedy Manila, a 3-month-old group, is out to change the usual Filipino stand-up comedy dished out in comedy bars, where laughter is mostly elicited by insulting some people in the audience. In this video by taken by INQUIRER. net’s Ryan Leagogo, comedians Eri Neeman, Red Ollero, Victor Anastacio and Alex Calleja dish out samples of their jokes sans audience insults. Video by INQUIRER.net’s Ryan Leagogo

MANILA,Philippines—When stand-up comedy gets within someone’s earshot, the two likeliest responses would be that it’s tackless or that it’s for the coño crowd. However, one group dares to change all that.

“Laughter is universal,” said comedian and host Eri Neeman of Boy Backup fame. “We Filipinos love to laugh, and whatever is funny we laugh at it.”

The comedians put on a stand up Filipinos are not familiar with, stand up comedy sans the audience insults that fuel laughter.

“I wish for this kind of stand up to be accepted since this is still laughter,” Neeman said.

Calleja said that their kind of stand up does not differ much from what Filipinos think of stand up, it’s still the same where people laugh.

Though the television program writer admitted that Filipinos are used to the brand of stand-up from the comedy bars because it is the only brand “available.”

Neeman said that comedy does not depend only on the crowd, “they will laugh as long as it’s funny.”

“We Filipinos are like the black sheep of Asia, because we always laugh so much, we even laugh at ourselves.”

Neeman said that Comedy Manila will “change” the stand up comedy scene in the Philippines.

“We won’t stop until this is an accepted style of stand up in the Philippines…we would like to share this wonderful style of comedy to everyone,” said Neeman who credited the rise of their brand to pioneers Tim Tayag and Allan Manalo who started the style in 2006.

The comedian added that their style of stand up “is for everyone.”

“The jokes are personal and come from their own point-of-view, whether that be conyo, kanto, sosyal or barumbado…this style of of comedy is for everyone who is willing to try it.”