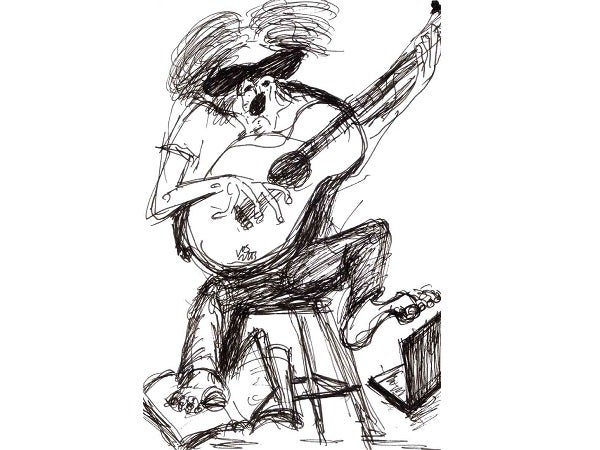 Resting on stands beside my writing table are two guitars, a regular-sized, steel-stringed acoustic and a smaller, nylon-stringed, acoustic-electric. A third one—“Little Martin,” as its own makers have baptized it—has been taken away by my son, Paolo, for reconditioning; being the handiest, it has been my most active collaborator.

Yes, the guitar is a collaborator, although not in the sense that it is in Paolo’s case: He sings with his guitar—in fact, professionally; I, on the other hand, write professionally and, for all the uniqueness of the idea, have never tried writing to guitar accompaniment. If writing and guitar come together at all for me, they probably do so only in the subliminal sense.

When I’m stuck writing and a paragraph won’t go on my computer, I go to my Little Martin or either of its fuller-fledged fellows (the bright-toned Taylor and the quieter La Patrie, a parlor guitar by Godin), and after a while the paragraph gets sorted out. I don’t know how it works, but it works—always does. That’s why, to show singular appreciation, I’ve been giving my guitars more quality time, time with no paragraphs intruding.

As everyone else is presumed to do it, I sit down to write and remain seated writing. (I recall EB White’s imagined exchange with the formula-writing author Rudolf Flesch. “Why are you sitting down to write?” asks Flesch. “Because, sir,” replies White, “it is more comfortable than standing up.”) Anyway, for the rigors that writing demands professionally, I try to do it with every aid I can get—dictionaries of all sorts, grammar and usage texts, books on writing as well as writings on relevant disciplines, masterworks for instruction as well as inspiration. A latecomer to the English language and an early dropout from college altogether, I have struggled with writing anxieties all my life.

But I don’t work chords the way I work words, not with any professional discipline or purpose that pretends to standards. That’s why I have no guitar anxieties.

For all the richly rewarding relationship my guitar playing has to my writing, it’s something I do by ear. I can’t read music or any of the transcriptions devised for the hobbyist. Of these simplifications, tablature is the easiest to follow for guitar: It practically takes every one of your fingers (drawn as dots) and sets it on the right fret and string. Truly stupid-easy, but as stupid as I may deserve to feel, I also feel deprived of the excitement of self-discovery.

Don’t for a moment think I hold my guitar in any less serious regard than it deserves. If, indeed (as, again, EB White, an absolute favorite of mine, says, quoting an unnamed “elderly practitioner”), “writing is an act of faith, not a trick of grammar,” guitar playing is, to me, nothing less. When I take my guitar in my arms, all extraneous thoughts are banished, and that’s when I do real playing—purposeful, heartfelt, still by ear, but definitely as an act of faith. Never mind wondering if it’s any good, you are yourself extraneous to the affair, a non-factor, like everybody else. There’s just me and my guitar.

Oh, but yes, we do have a third partner to sort of round off the affair into a ménage à trois, one conducted most civilly, even companionably, in a condominium nest too small for any willful sounds to escape any resident ear. That’s my wife, Chit, and she’s a real darling about it all—she sometimes even listens in.

I take a tune and put my guitar to it, the two of us more singing together than one accompanying the other, neither one second fiddle to the other, collaborative yet independent of each other: I do the tune my way, and let my guitar do it its way, singing along, in jazzy, bluesy runs that court dissonance—chords venturing close to the brink, to that point where they seem to teeter but don’t quite go over, where they may sound audacious, yet interesting—to my own lay ear anyway.

Coming upon what Harriet Beecher Stowe (“Uncle Tom’s Cabin”) has set down about Rubens after observing him in the original for the first time, at the Louvre, I feel validated—validated by an admittedly untrained observer and in mere theory perhaps, but validated elegantly:

Like Shakespeare, [Rubens] forces you to accept and forgive a thousand excesses, and uses his own faults as musicians use discords only to enhance the perfection of harmony. There certainly is some use even in defects. A faultless style sends you to sleep. Defects rouse and excite sensibility to seek and appreciate excellences.

Still, while I may have been trying to do on my guitar what Beecher Stowe feels Rubens has done with his brush, I’m not, of course, about to entertain any delusions of ever coming within any degree of comparability with Rubens. Indeed, I’d be mortified if anyone came within earshot of my playing: It’s a strictly private affair.

The affair did not become serious until after I had quit editing newspapers, about 20 years ago, and begun writing more and editing less and working from home. In fact, domesticity is proving itself a perfect setting all round; it’s making me lustfully aware of the deprivations I caused myself while busy running life against deadlines in a newspaper office since I was 18, expending energy on producing words today for tomorrow’s consumption, then recharging only to be ready for the next round of the rote. Running now on residual energy at 67, I can’t feel more content than in my ménage.

Meanwhile, it’s my guitar’s turn to complain. It seems that even with the purest of affairs jealousies cannot be avoided.