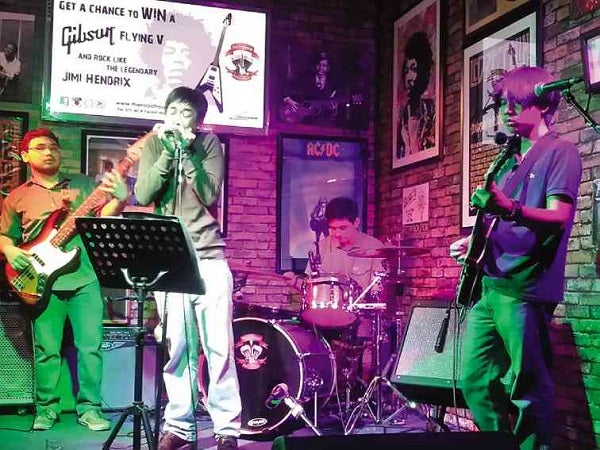 There are countless clubs in Metro Manila that feature live music, but only a few of them have character. By that we mean a trait or quality in the place that makes it stand out from the rest.

The ’70s Bistro is one example. It’s been around for over 20 years, still standing in its original site on Anonas Street in Project 2, Quezon City, although it has also gone through rough, trying times. What keeps it surviving is the spirit of rock and roll which the club’s owners and loyal customers have imbibed in their lifestyle.

When it first opened sometime in 1992, the place looked like a typical “folkhouse” that was the rage in Manila during the early to mid-’70s. That period of social unrest and soft-rock were embedded in the minds of ’70s Bistro’s owners—Charlie Jayco, Helen Alejo-Reyes and husband Wijohn Reyes, Renard Bartolome, Jun Maravillon, Ben Galindo and Anthony Gutierrez—most of whom attended the University of the Philippines and were involved in social development work.

At the start, the music stuck to the folk or unplugged setup, partly because the club was in a residential area and neighbors would complain when it got too noisy. But perhaps those neighbors soon liked what they heard. Throughout the ’90s, the ’70s Bistro featured a nightly lineup of performers which comprised practically the entire roster of artists that gave birth to Filipino alternative music: Joey Ayala, Ang Grupong Pendong, Grace Nono, Gary Granada, Noel Cabangon, Jess Santiago, The Eraserheads, Yano, Color It Red, Parokya ni Edgar, the list goes on.

On most nights, the vibe inside the club was pure rock and roll—the air full of energy from the music and people dancing till the wee hours. Gone was the folkhouse ambiance; the club would soon be referred to simply as the “Bistro.”

In 1993, the club’s owners and supporters undertook one of a number of ambitious music projects, “Bistro sa Amoranto: Tugtugan Pamorningan”—a 12-hour concert at the Amoranto Stadium that showcased all of Bistro’s performers, including Mike Hanopol which, Inquirer columnist Conrad de Quiros noted in his review, was “the highest point” of that marathon gig.

The idea then was to have the Juan de la Cruz Band reunite for the concert, but Joey “Pepe” Smith was in jail at the time. He would eventually be released, with one of the Bistro’s owners, lawyer Wijohn Reyes, defending him in court. Months later, Smith got to play at another of the Bistro’s public events, a Labor Day show at Rizal Park.

At its peak, the Bistro was one of the three hottest clubs in the city which included Mayric’s in España, Manila, and Club Dredd in Timog (later in Cubao), Quezon City. The other two have since closed.

When business was bad, the Bistro would have sympathetic friends who helped it stay afloat. Some years ago, Ely Buendia was said to have plunked in a substantial amount along with a batch of new partners. And, more recently, a loyal customer, July Marcelino, also did the same, pouring in money because the club needed renovation.

A few months ago, we revisited the Bistro and chanced upon a big crowd of college kids watching their schoolmates play onstage. Turned out that an organization in the Ateneo was holding its event at the club. We had fun having a few beers and feeling the same rock and roll vibe all over again.

The blues at Roadhouse

Over at the Mall of Asia complex in Pasay City is another club that has a distinct character. Its name is Roadhouse Manila Bay and it features bands playing the blues—the foundation of rock and roll.

On a Saturday night, we caught the Ian Lofamia Band burning down the house with songs that sizzled with passion. Composed of Ian Lofamia on vocals and harmonica, Arvin Austria (guitar), Spencer Rymonte (bass) and EJ Mercado (drums), the band had a full-house crowd of locals and foreigners transfixed on its authentic blues repertoire, which included rarely heard songs by Sleepy John Estes, Little Walter, Paul Butterfield, Dr. Feelgood and T-Bone Walker.

But the Ian Lofamia Band also performed a couple of striking originals—“Kaibigan” and “That’s What Makes Me a Man.”

The blues, when heard for one or two hours straight, can be boring; but what made the Ian Lofamia Band’s set worthwhile was Austria’s crisp guitar solos flying with confidence, and Lofamia himself leading the way with his commanding voice and intense manner of blowing his harp.

Rymonte and Mercado held the rhythm with just the right level of tightness. Such a professional-sounding band belied the fact that these are young guys inspired by an unadulterated love of the blues.

The other notable thing about Roadhouse Manila Bay is its music videos. The night we were there, clips of Creedence Clearwater Revival, The Doors, Van Morrison, AC/DC, Jeff Beck and Eric Clapton kept us company.